I woke up under the scorching sun of the island's beaches. As I climbed to my feet, I noticed the... thing on my wrist. Some sort of... implant? Strange. I made my way inland, scrounging for supplies – wood, fiber, thatch, stones... anything I could use to survive. I was too afraid to light a fire, for fear of what it might draw to me.

Before long, the sun had set, and I began to regret not starting a fire. Alas, as the tree before me fell, I spotted lights coming from the crevasse below me. Spying down through the bushes I could see them. Hunters. They had brought down a giant... dinosaur. A Tyrannosaurus... I quickly scurried out of the area; I'd wanted no part in this. I gathered what I needed to start the smallest of fires, saying what prayers I could that it'd keep me not only warm, but at least somewhat concealed. As the light from the flames lit the immediate area, I could feel the warmth of the utahraptor's breath on my neck. 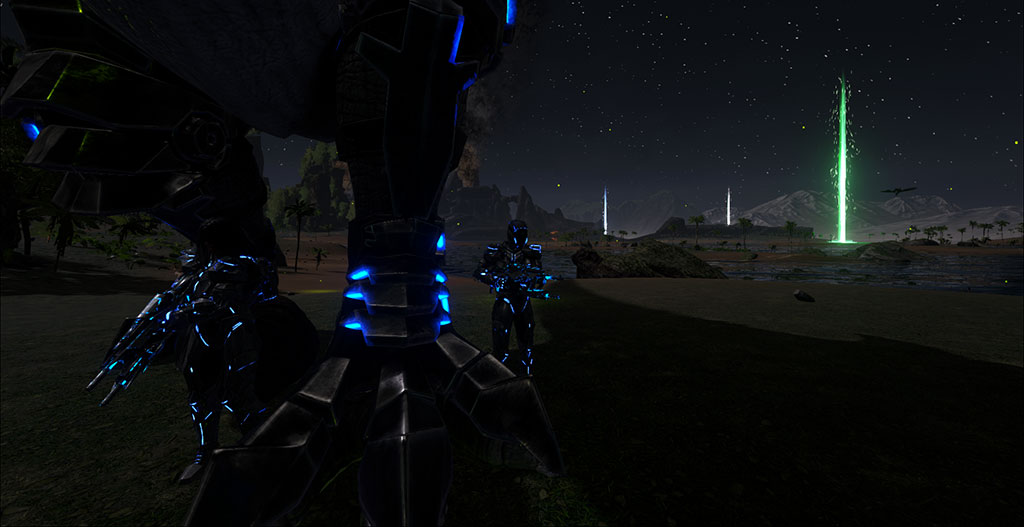 Where had I awoken?

ARK: Survival Evolved is full of moments like these. Let your imagination soar while you immerse yourself in its world and its moments. But among the exhilarating trepidation – and the excitement – lies a faint outline of frustration.

If you've ever played a survival game, the first thing you'll notice upon spawning on the beach is just how by-the-books ARK handles itself. Naked, with little more than your hands and feet to keep you alive. I had never been impressed with survival games; they never really enthralled me. But me, being the childhood-self-proclaimed Junior Paleontologist I am (disclaimer: Contrary to 10-year-old me's words, I am not a Paleontologist) saw dinosaurs and had to jump on the train.

Yet beyond the familiarity to survival game veterans such as DayZ, Rust, or even Minecraft is a land of mystery and, yes, dinosaurs. This is no post-apocalyptic wasteland. It's a beautiful island, filled with just as many gorgeous treats as it is things that want to kill you and eat you.

ARK has been in development since October 2014, and entered early access on June 2015. The sheer amount of content that's been put into it since then is incredible. There are multiple tiers of structures you can build, as well as, the game's signature trademark; taming. Most of the creatures you can discover on the island can be tamed to either fight/harvest with you, or become a mount. For the longest time, my camp was filled with an army of utahraptors because... well, utahraptors! Now I'm pretty much glued to my wyverns.

And then you realize that one of the game's biggest draws is also one of its biggest flaws. ARK's taming mechanic requires you to (in most cases) knock out a creature, then feed it until it decides it wants to do your bidding. This can take a few minutes for smaller creatures, but for the larger ones, it can take hours. You have to sit there – feeding it narcotics to keep it asleep and food to progress the taming – for as long as it takes. On official servers, this can be upwards of nine hours or more depending on the dino, level and the kind of food you're feeding it. The example here is a Giganotosaurus, level 120, fed raw meat. Not to mention the 1000+ narcotics you'll need to keep it asleep.

And then there's breeding, which takes the waiting game to a whole new level. That Giganotosaurus' baby can take upwards of a week, maybe even more, of constant babysitting to hatch and mature fully. This makes ARK a huge timesink if you want to play on official servers and dive deep into taming and breeding. It can be much less of a hassle if you play on an unofficial server, however, as I run my own. Just be sure to find admins and players you trust.

Yet, at the same time, you don't need to in order to enjoy the game. The building and exploration mechanics alone have kept me playing since shortly after the launch of early access. There's plenty to do here, and it's kept me plenty entertained. The constant updates and additions don't hurt, either!

One of the latest additions is probably one of my favorites. The TEK Tier. I admit, I've always been a purist for immersion in my video games. I roleplay every single game I play, even if I do so alone, and I put myself into the shoes of a character and live in their world.

So, when I wake up stranded, naked and afraid on an island full of dinosaurs, I want to stay primitive. I don't want to run around with AK-47 assault rifles and rocket launchers. Yet with the introduction of the TEK Tier, I had to try it. And now, I love it.

The TEK armor is essentially a basic version of an Iron Man suit. You can fly, you can super-punch things into oblivion, you can use night vision and so much more. It's OP as hell, yet at the same time, it takes a lot of work to obtain. Enough work that it makes it feel like you've really earned it. They're still expanding on the TEK Tier, and will be adding new structures, creatures and items for the foreseeable future. Did I mention a laser-shooting set of armor for the T-Rex? 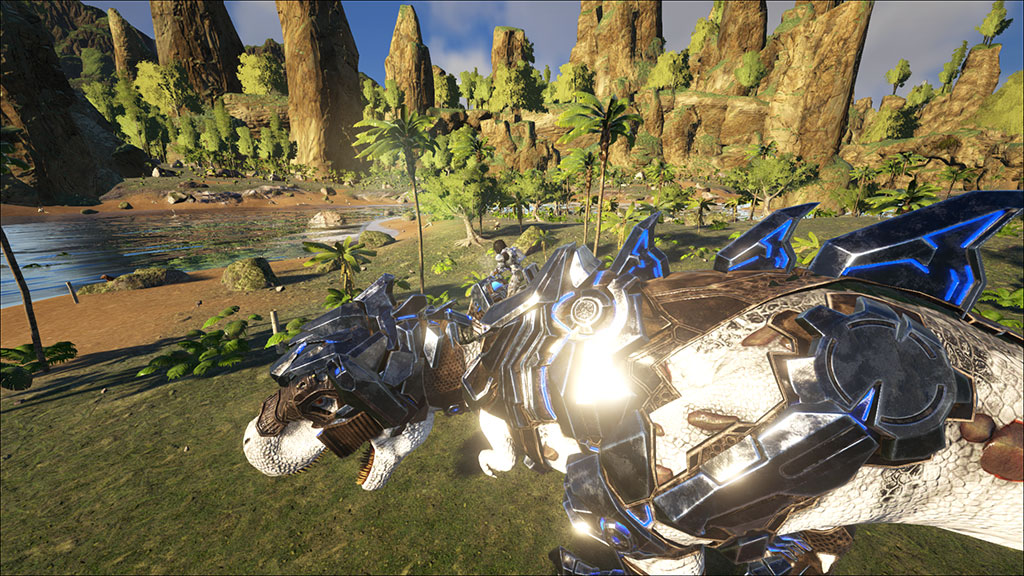 ARK has been in early access for quite some time, longer than most would feel it should have. I feel they're keeping it there as long as they need to in order to add the content they want to the game, as well as fix issues. Despite it still not being 'fully released', ARK plays and feels like a fully-featured game, despite the optimization not being perfect. A little playing around can easily fix performance issues, though.

All in all, ARK offers not only a sense of survival, but one of adventure, mystery, awe, and beauty. And death. Lots and lots of death.

As a man or woman stranded naked, freezing and starving on the shores of a mysterious island called ARK, you must hunt, harvest resources, craft items, grow crops, research technologies, and build shelters to withstand the elements. Use your cunning and resources to kill or tame & breed the leviathan dinosaurs and other primeval creatures roaming the land, and team up with or prey on hundreds of other players to survive, dominate... and escape!