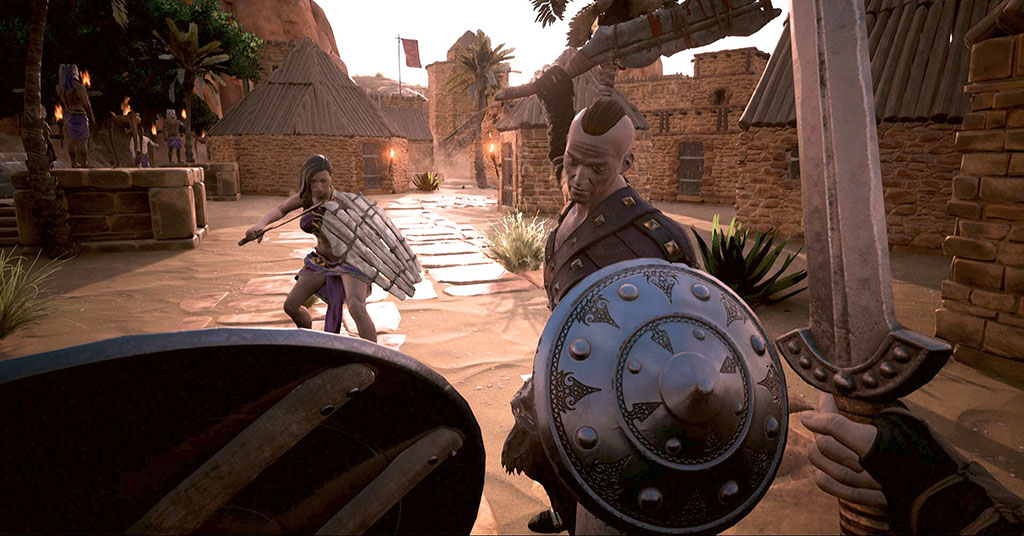 Blood and brutality; this is what makes Hyboria what it is. The gritty beauty of Robert E. Howard's world comes to life in Conan Exiles, the newest offering from FunCom, creators of Age of Conan and The Secret World.

Exiles offers a refreshing look at the survival genre, one that takes the world it's set in to heart. Speaking of hearts, all you Set worshippers will find plenty. But more on that later.

You begin with character creation, with all kinds of presets, options and sliders available for you to play around with. Seriously. All kinds of sliders. Cough.

One thing I love about Exiles is that there is a somewhat cohesive story for your existence in the Exiled Lands. You were charged with crimes you may or may not have committed (it is up to you to decide) and left, crucified, for dead. As you feel your breath fading, Conan the Barbarian himself cuts you free. Where you go from there is up to you, but do not try to leave the Exiled Lands. The bracelet on your arm will kill you the moment you step foot past the Cursewall. As you explore the Exiled Lands (currently limited to the desert biome in this stage of early access with more promised) you will learn about those who came before. That's right, you're not the first one here. There are settlements here, even cities filled with others. As you delve into the secrets the Exiled Lands have left behind, you will come to understand why you are there, what that bracelet is, and why Conan set you free.

While other survival games have a story, there typically is not much of it, and what is there is added generally as an afterthought. While there are no quests or overarching plotline to follow, the story is certainly available, and is definitely a focus for the developers. The story is found in clues you’ll find in caves, notes, and the world design itself. Here, the game feels built around the story; a benefit of being set in an established world the developers already have experience building in with Age of Conan, no doubt.

During your stay within the Exiled Lands, you will fight for survival amongst the threats of hunger, thirst, wildlife, cannibals, and corruption. Yes, corruption. Delving into caves and dungeons will impact your mind, decreasing your stats and hindering you mentally. Luckily, there are ways around this.

The game's been designed with immersion at the forefront; this is a world you are not meant solely to survive in, but to live in. There are plenty of tools other than just building to assist in that endeavour. You can craft all manner of decorations, such as rugs, trophies, chairs, tables and even a mighty throne for you ruling types like me.

Unlike ARK, which is famous for its dinosaur taming mechanics, you will not be taming wild beasts here in the Exiled Lands. Instead, Conan Exiles favors a different approach: humanoid NPCs that roam the land and offer you friendly faces to talk to -- or unfriendly ones to bash in. The latter you can knock unconscious, drag back to your home, and break on the wheel of pain to serve as entertainers, crafters, archers or fighters to protect you.

And then there's the religion system. As of now, there are four deities: Set, Mitra, Yog and Crom (who serves as the atheist choice, since he seeks no worship and offers no aid). If you gather enough favor, you can actually summon your deity's avatar to crush your enemies below their heel. Or tentacles. Or scales. The sheer destruction they can wreak is awe-inspiring, and makes for some epic wars. (Screenshot 3)

All of these things come together in a cohesive, powerful way to create an excellent foundation for what could very well become the most immersive, roleplay-friendly survival game to date.

Conan Exiles is an open-world survival game set in the brutal lands of Conan the Barbarian. Survive in a savage world, build your kingdom, and dominate your enemies in brutal combat and epic warfare. Start with nothing but your bare hands and forge the legacy of your clan, building anything a small home to gigantic fortresses and entire cities. Wage war using swords, bows, siege weapons, and even take control of giant avatars of the gods and lay waste to enemy cities. Explore a vast, seamless world full of challenge and opportunity. Hunt animals for resources, slay monsters for treasure, and delve deep underground to discover the secrets of ancient civilizations.