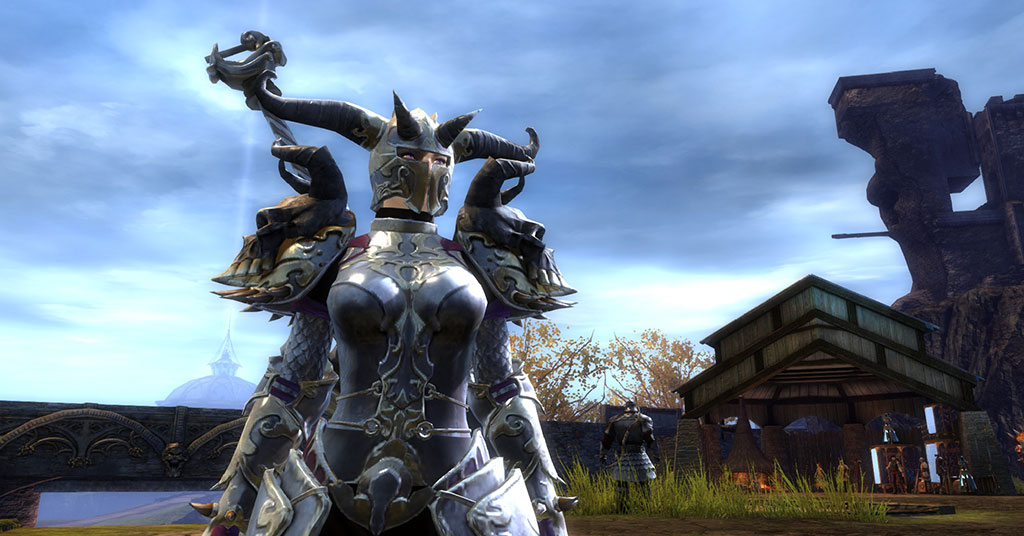 It’s barely been any time since the much-vaunted launch of the June 2017 Competitive Feature Pack for Guild Wars 2’s World Vs World. Put yourself to the sword, overcome some epic queues, and pick your way through the corpses of your enemies and you will find new rewards, incredible armor, and a brand new backpack among the changes in the latest WvW update. With that in mind, we caught up with ArenaNet’s McKenna Berdrow, WvW Game Designer, and Grant Gertz, Producer – PvP and WvW, to find out more about the World Versus World Competitive Feature Pack and the impact it is likely to have on players.

While player feedback was clearly a big motivation for the updates coming to WvW what was the reason for enhancing rewards using the skirmish system?

[MB] We wanted to shift players’ focus to be on Skirmishes: It’s a lot more digestible to tell players to focus on winning a 2 hour time period than an entire match, and even though Skirmishes have been in the game for several months there were no rewards to incentivize people to care about them. Therefore, besides player feedback, we wanted to add rewards to Skirmishes so players had some score they could focus on besides the match.

[GG] When we make changes to WvW we try to do it in a way that impacts as many play styles in WvW as possible. With that in mind, we believe utilizing the skirmish system for rewards meets that goal. Participate in WvW in the playstyle that you enjoy and you will gain the same or close to the same amount of pips as anyone else on your world. The only difference being pips for commanding and rank. 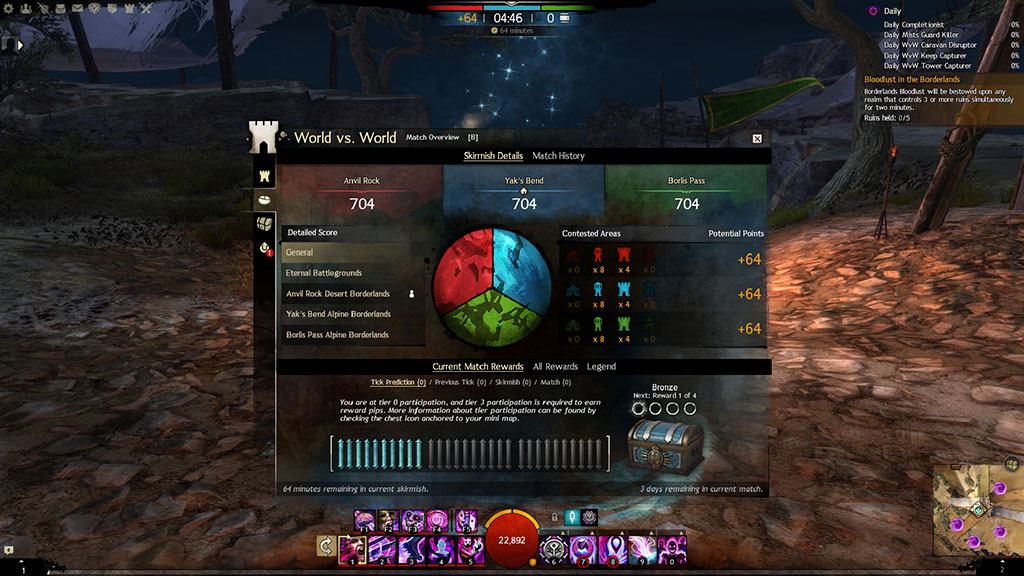 What sort of play time is expected to complete the mistforged armor sets and might this change?

[MB] It should take roughly 7 to 8 weeks to earn a full set of mistforged armor; about the same amount of time as it takes to earn a set in Fractals. Right now, it’s balanced around max tickets earned a week, but we’re keeping an eye on prices.

How are the new changes to skirmish rewards intended to influence player behaviour?

[MB] The main goal of Skirmish Rewards is to make players care about winning the current Skirmish. However, with bonuses to commanding and outnumbered, there’s incentive for more players to command and to play on outnumbered maps as well.

[GG] We hope this encourages players to care about each skirmish. But we also intend for players to continue playing WvW however they get the most enjoyment. There are a variety of playstyles in WvW and the skirmish system should reward you equal regardless of how you play. 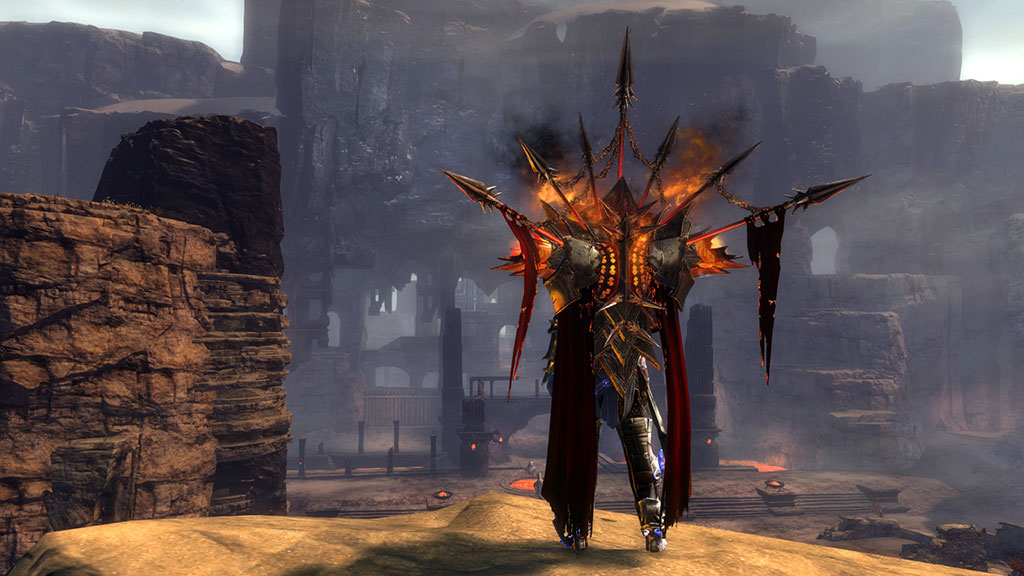 Does participation travel with you when changing maps or even across skirmishes? Tell us a bit more about how participation works.

Why not simply return to tournaments to enhance participation in WvW?

[MB] While a lot of players enjoyed the tournaments we held, we wanted to put in a system that works better with world-linking and felt like a more sustainable long-term change. Changing the focus to instead be on Skirmishes makes scoring a lot more interesting because the same world usually doesn’t win every skirmish in a matchup.

How much time was spent getting the new reward system in place and take us through the biggest challenge you faced during that process.

[MB] We started working on the system as soon as players voted for it in the last priority poll, 7 months ago. However, a lot of the rewards like the Mistforged Triumphant Hero’s armor and the legendary backpack came in earlier than anticipated and we wanted to add them with the launch of the system to make the system more exciting and rewarding.

One of the challenges I faced while working on the system was getting the wing effects on the Sublimed Mistforged Triumphant Hero’s armor working correctly. We had a lot of problems with it disappearing, clipping inside of characters bodies, and not working when you entered combat, but after trying a few different things we finally got that effect looking good for all races in the game.

[GG] We spent a lot of time iterating on the system to make sure it was as playstyle agnostic as possible. While we were doing this, we were going and back and forth with art to determine how long the backpiece would take and what date made sense to target for release. We originally intended to ship skirmishes without tier 3 armor or the backpiece. Both of these came in earlier than we expected and we realized we could bundle everything together to create a single update that eventually became the June 2017 Competitive Feature Pack. 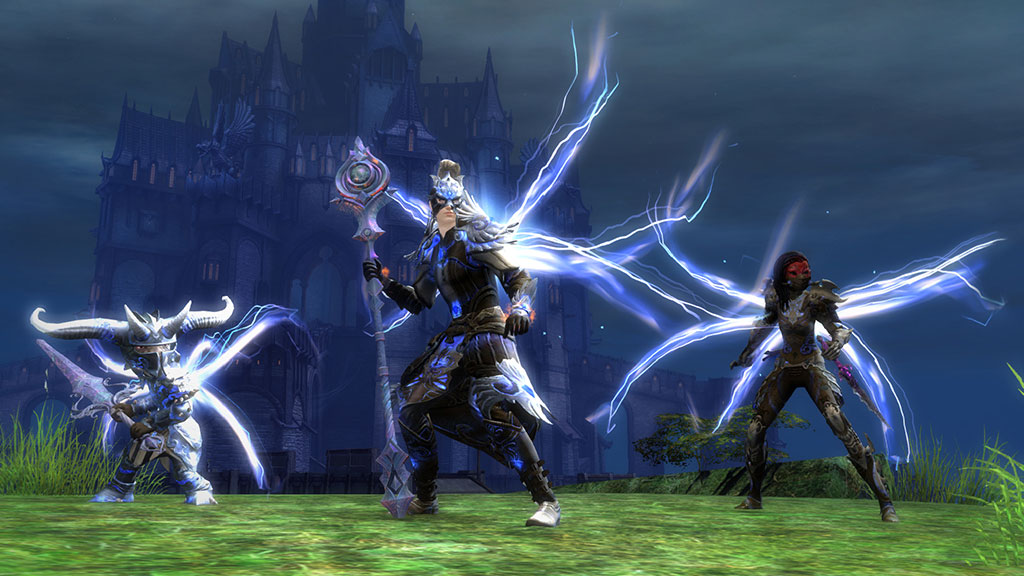 While there has been lots of discussion about rewards, what was the reason behind the revamped match interface?

[MB] We were planning on removing the Power of the Mists buff from the match interface panel already, and conveniently the new skirmish UI worked in that area really well. We also wanted to add the tab for match history because it was information that a lot of websites displayed, and we wanted to make an effort to display some of that information in-game so that players didn’t need to go to a different website to see that information.

Now everything is live do you think WvW is ready and how do you think this will change the communities of hard core players?

[GG] Now that the update is live, it is up to the WvW community to welcome new and old players alike to WvW. We have seen a massive influx of players into WvW in the days following the update. We hope, with the support of the community, many of these players will find new friends and new guilds to bolster the ranks of WvW for weeks, months, and years to come.