I have played Elder Scrolls Online before on the desktop and I did enjoy it, but  I stepped away from it for a long time. Shortly after Morrowind launched, I decided to give Elder Scrolls Online another try, but this time I wanted to play it on the Playstation 4. What I soon discovered was a new found joy for Elder Scrolls Online. I could sit back on my comfy couch and get lost in Tamriel. This was also the first time I had experienced One Tamriel since that update had launched and I felt like I was playing Skyrim once again. The walls of the sandbox came down and I could explore wherever I wanted with whichever character I created.

When I started playing on the Playstation, I began my adventure with a Nord Dragonknight from the Ebonheart Pact, same class and race I used when I played on PC. I reached about level 8 and started to feel a little bored with the game, not the game’s fault but mine, I am viewing game content that I have seen before. So before calling it quits, I rolled a new character in the Aldmeri Dominion, an Altmer Sorcerer. Funny part is I tried to play this class as a tank. Started out ok but got a little tougher as I progressed. Even though the sorcerer/tank attempt wasn't going as well as I would have liked, I found myself losing time while playing. Guess I must be enjoying the game to go into “Coma Game” mode. I was enjoying it so much that I decided to get the Morrowind expansion, which only added to my enjoyment. However the new expansion created a new problem that is common among most gamers,  Alt-itus. I tried the new warden class but quickly found that this class wasn’t my style, so rolled a Templar and this class has become my primary character.

As for the gameplay of Elder Scrolls Online on the Playstation 4, I found it to be very smooth and easy to use. The combat system with a controller very much reminded me of Skyrim, only with some skills added. Mapping skills to the buttons is pretty simple, I did find I had to remap or rearrange what skills were where, based on how I used the controller. Less common skills such as self heals I would map to the left button and buffs I would map to the right button.  Attack skills I would map to the square, circle, and triangle buttons. The controller tutorial early on was easy enough to follow. I haven’t used  many of the social interactions as of yet. The text chat system isn’t as fluid as a computer, but that is to be expected.  Essentially you have to stop your gameplay to bring up the chat screen and “type” your message. I recommend you use chat from a safe place.

I can say that I am very happy that I gave Elder Scrolls Online on the console a chance because I have found incredible enjoyment from the game. In my opinion, a sign of a good immersive game is when you say “Oh I’ll just play for an hour or so,” and after the said “hour” you look out the window and say “is that the Sun coming up??!!” Oops. Your “hour” of gameplay turned into an all nighter. I may or may not have had this experience before. Have fun exploring Tamriel from your couch. 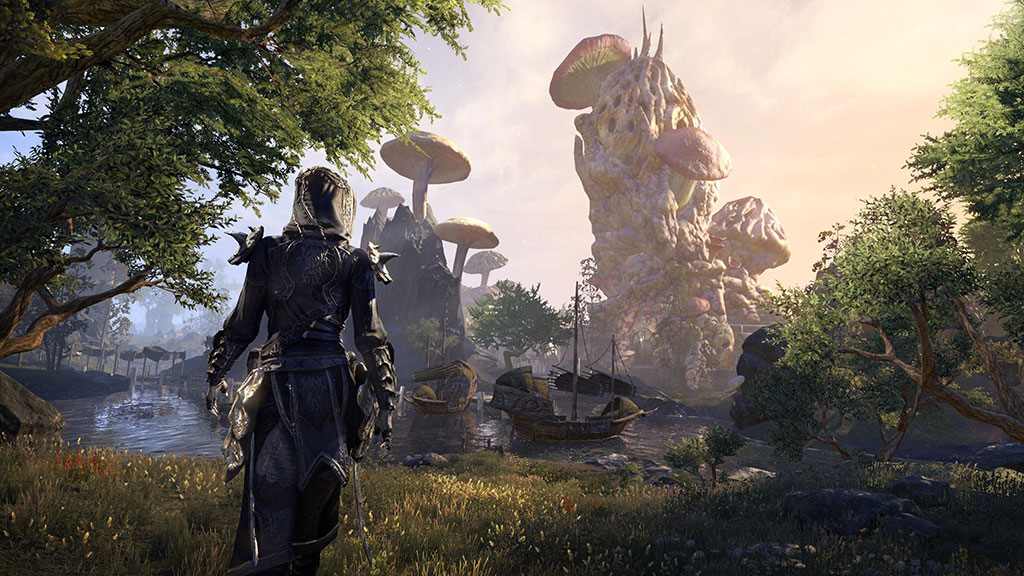