As Far As the Eye - A Game Review and General Guide

This gem hit Steam on September 10, 2020. After only 11 hours of play, I found this game fun but also overly daunting. I can’t say how many pupils have died on their way to the Eye as I learned this game. Despite having way more failures than successes, I find it intriguing enough to try again. The following is an overview of the game so you can understand how it works and why I am already addicted to playing.

There are two modes of gameplay: Campaign and what I’ll call Standard Play. There are five chapters in the Campaign series and it is set up to teach you how to play the game. I suggest doing these though in the first month of release, chapter 3 had a glaring bug that made it so you could not gain completion because the one pupil would not train to be an Engineer but was sticking to Architect only. I definitely put in a report on this bug. You have less control of what to do with your pupils in a campaign since it is meant to be a tutorial, so I had no way of fixing the pupil’s training path.

Standard Play is under the Play button and starts out with one option only until you beat it and then you can try one of the other options. However, every time you play again you get something different. This helps with the replayability since it randomly sets up the paths to the Eye with each new game. There are also multiple ways to go, leading to more complexity. On the first playable level you usually have two or three halts to choose from for the first hop. After that you either had one or two choices for the second hop, with a total of three halts to go through to reach the Eye.

So what is a pupil, a halt, and the Eye? The main goal of the game is to get your pupils from a halt they are on to the Eye. The Eye is the safe haven the pupils need to reach before the waters reach them. A halt is a staging place where they can gather and produce the items needed to get to the next halt. One of the pupils may have to gain a certain rank in one of the trade skills in order to move to one of the next halt options. The pupils move via a caravan and will set up camp on a halt to go to work. This sounds way easier than it is, which is what makes this game so replayable since it is never exactly the same each time.

Let’s look at the travel map first to show you how this looks. In the map below I am still on the starting map with 122 turns done, but I still need more ore to move to the circled halt I chose to go to. As you can see in this game I had three choices. The grayed out halts closer to the Eye, the big area on the right, are too far away for me to have the knowledge about them. Most times you can plan ahead for two halt stops and decide which might be the best, based on what you have on hand and what resources are on your halt. So you can attempt to make a strategy and train your pupils accordingly. 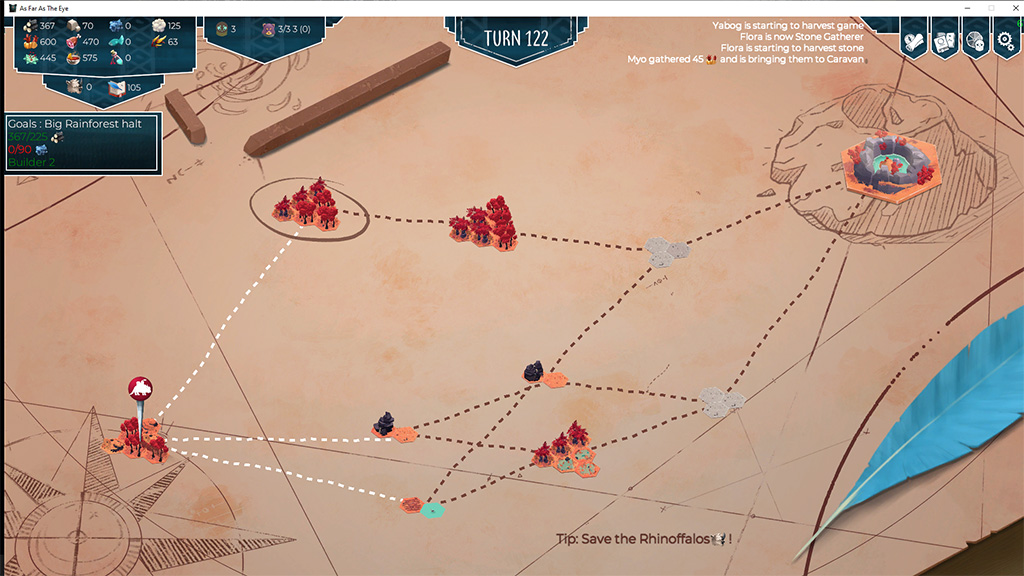 Let’s look at what you can find on a halt. The halts are laid out in a hex design with a variety of movement rates based on plains, hills, and mountains along with some lakes you will have to go around. There are several food types to acquire and you have the ability to train a pupil to cook it in a variety of ways, such as a bakery for grains. Other resources are wood, ore, stone, wool, and pack animals you can obtain. Most everything requires a building to properly acquire the items except for one food source, wood, and the acquisition of pack animals. Also, only one pupil can work in a building at a time.

Another fun thing you can find on halts is a variety of ruins and auras that your pupils can interact with for better or worse. These can cause you to lose turns, health, or buildings get damaged. However, some great assets can be had if the ruin turns out to be beneficial. 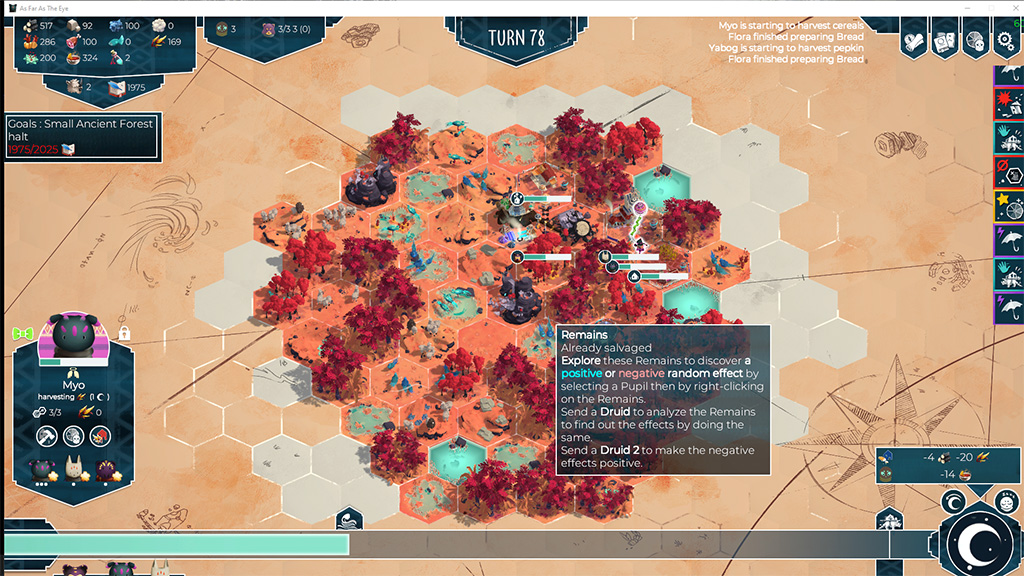 The biggest thing to remember about your halt is to never set the caravan or a building on a hex that still has resources you want because you will lose them. Sometimes you will have to blow away a resource hex in order to have the bigger benefit of the building. The caravan and buildings can only exist on plains.

This leads us to the third important feature of this game, the Pupil. In the first level of the standard play, you start with three pupils that know absolutely nothing. To boot they need to learn how to feed themselves. Every pupil will eat 6 easily acquired fruits or six prepared foods. They will start to lose hit points when hungry and then they will pop when death hits them. So gathering and cooking food is one priority.

One of the pupils should be your primary builder and one for food preparation. The gathering of resources, exploring of the halt, and greeting of passing caravans of other pupils can be divided amongst them all. Training specifically for other trades should be noted if required to move to the next halt.

So how complex is training a pupil? Both easy and hard. Note that there are plenty of paths to take on the wheel in the picture below. The first three steps happen automatically by simply doing whatever is the base of the skill. For instance, food and wood harvesting can then branch out to fruit gatherer and woodcutter. Each of those branches has two paths you can choose from for a variety of skills to help. As you can see Flora, my builder earned experience in five different paths helping out along the way besides building. All of the pupils will start with the gathering of fruit or wood because of the need to eat and wood being the base ingredient for most buildings and for cooking. 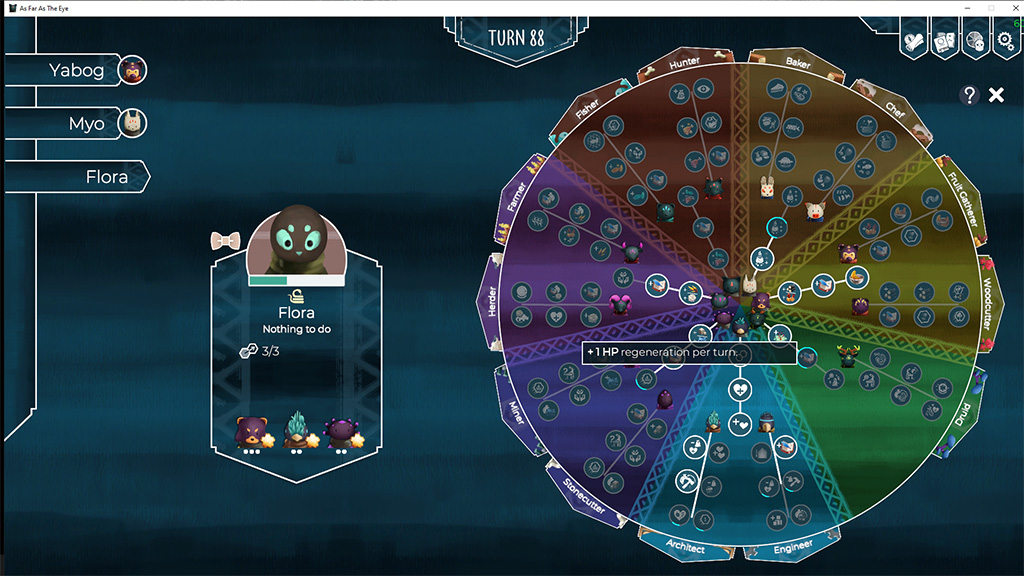 To add on to all this complexity of ways you can acquire what you need from a halt to be able to move on in time to the next, you need to learn how to pack up for the move. You will not be able to take all of it with you. You will have resources, food, and any mobile building you wish to carry. These all fit into the caravan and whatever pack animals you have like a puzzle. Be sure to organize with the least amount of empty slots you can before choosing to move. The resources will max out at 100 per stack and will take the same number of spaces regardless of having the max or only 1. I try to make sure what I pack helps feed the pupils and supplies resources to help build on the next halt, or even have some of the things required to move to the halt beyond. I did run out of wood on a halt due to not bringing quite enough and then there was a forest fire so even planning ahead doesn’t always work. You never know what is on the next halt until you get there. 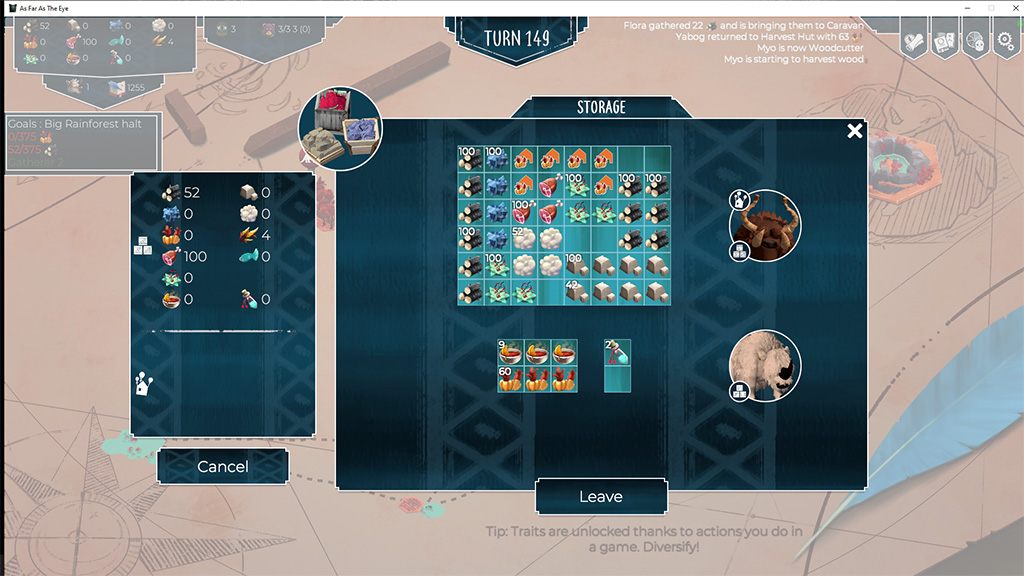 Each halt has a turn limit. Besides the good and bad that can come from exploring ruins, working with auras, and meeting other caravans, there is the concept of vagaries. You will get a warning a few turns before they happen, to help you deal with them. Vagaries are usually bad things to some degree or another. I almost got to the Eye on one of my attempts but the combo of a vagary that popped up and the fact that another bad occurrence reduced my stay time by 20 turns, I was about two or three turns from done when I got wiped out by the rising waters. Once those rising waters come the only option is to start a new game.

There are some things I have not even touched on with the game that you can do with your caravan and councils. I have to play more with those to really understand them. I still haven’t got to the eye on the standard play at the first option either but as mentioned, I came close.

It’s all this complexity to the strategy that makes me want to keep diving into the game to see what I can learn next and someday play at other levels. Right now I keep having the rising waters wash me out of the running.

If you are into strategy games that make you think, this is for you. Of course, the cutesy graphics will intrigue your kids. It could help them learn critical thinking as long as they don’t get easily upset due to their pupils popping or being wiped out by the rising waters while learning. You will probably fail way more than succeed, but that is actually part of what makes this strategy game fun. You learn a lot from your failures. May your attempts to reach the Eye be filled with fun even if you find defeat.

About As Far As The Eye

Build a mobile village and travel with your tribe toward the center of the world, called The Eye. This roguelike turn-based resource-management game is made of procedural situations, natural events, skill-trees and hard choices. Ready to move?