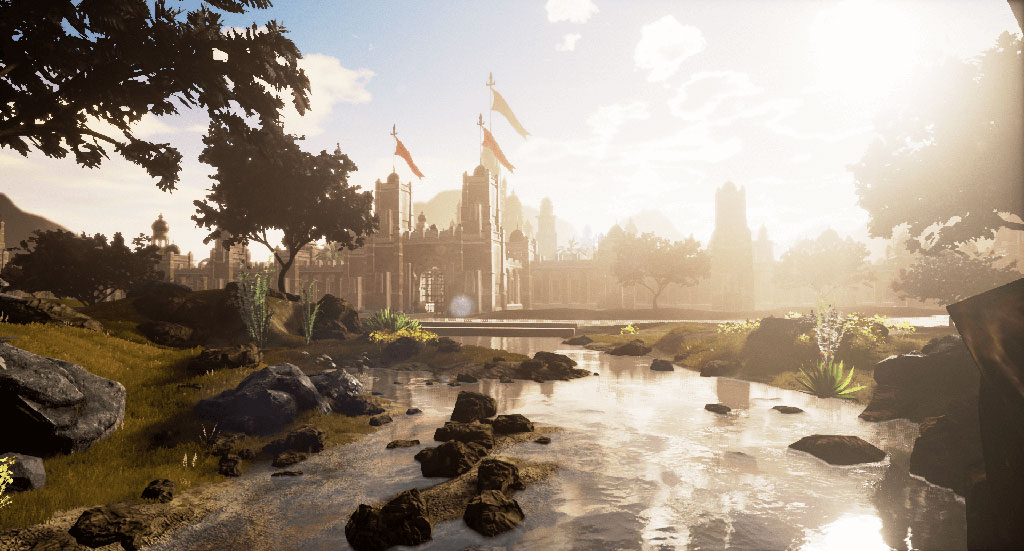 As you walk around the floor of PAX West, you begin to notice the famed red hats "Make MMOs Great Again" wandering among the crowd. Then you see the booth. Ashes of Creation went all out and when you compare it to the other crowdfunded projects in attendance you can see that their focus is getting the players hands on their product.

The line to get hands on with this title wrapped completely around the larger sized booth which rivaled Ubisoft. Players were very excited to try out this new innovative MMORPG. I had a chance to get hands on with it for the first time and I can personally attest that this pre-alpha build was a very significant influence on raising my faith in the game. While much of their pre-alpha build is in an experimental state and is likely to change before launch I can share some of the key points that bring a lot of promise to the title.

The only drawback in my short play session was the skill shot based skills. As a healer I was concentrating on the health bars of my allies and could not seem to keep an eye on the skill shot bar and their health bars at the same time. So I ended up avoiding the skillshot skills all together. As Steven mentioned, that system is experimental and will likely change. He did mention however that there are two types of skills: single press skills and action skills that require a skillshot. It's entirely possible to slot and spec your character to never use one or the other. If you're not a Hot Shots Golf legend, you might want to avoid the skillshot skills.

Now the last thing I'd like to share with everyone is about Steven. This was the first time I was able to meet him in person and see what kind of leader he was. Like everyone else I was a bit skeptical that a "Player" could set into a "Leader" role of a gaming studio and be successful on his first try.

However after meeting him, seeing his vision, witnessing his conviction, and seeing how he interacts with his team, I believe he might just be able to pull this off. Now as a person who primarily works in the business world, I get to meet a lot of CEOs and top tier leadership. I can tell you one thing for certain, most leader positions will seek to elevate themselves over people they are conversing with. Whether it's a stage, podium, or have everyone sit while they stand. Well this is what really struck me as unique about Steven. When he brought six of us media folk into the media room, we were all standing and Steven chose to lower himself to the people he was speaking to by sitting down.

He listened to our feedback, answered our questions, and treated us with respect and kindness. This was the first time I've seen someone in a leadership position do this and in the business world this is unheard of. Traditionally the leader is the last to sit. This is when I realized that while Steven may be the leader at Intrepid Studios, he does not see himself as more important than his audience. He leads through encouragement and relies on his team to bring knowledge and solutions to his overall vision. He is humble, and the type of person who builds people up. He is an enabler making everyone around him feel important. I can now see how this product has become so polished so quickly and his team is quick to rally behind him. This experience solidified my opinion that he could in fact pull this off.

Even in pre-alpha, Ashes of Creation has come together beautifully with breathtaking visuals, visceral combat, and a truly immersive experience. I for one can't wait to dive into the Alpha this December. Things are shaping up nicely and Steven’s focus and vision is driving this team forward at an amazing pace. The way his employees speak of him and the way he interacts with people gives me great confidence that Ashes of Creation will live up to his claims. So far with very little time in development they're off to a great start.

About Ashes of Creation

Ashes of Creation uses a dynamic node system, unique to MMOs. Nodes are widespread locations throughout the world that players can develop when they complete quests, kill monsters, PvP, etc. Nodes have their own experience levels which grow as players participate in normal activities within their “zone of influence”. Nodes can eventually grow into camps, villages, and at their pinnacle, metropolises. As these nodes grow, so do the quests and services the nodes offer to players. However, nothing lasts forever. World events may trigger horrific monsters which can attack nodes, even other players may pose a threat. Every node has the possibility of being be attacked and destroyed, the reinforcing of competing interests lies central to philosophy behind node design.