Conqueror's Blade's Game Modes Offer Something for Everyone

Welcome warriors! So you were browsing the vast world of free-2-play games and happened upon Conqueror's Blade. From the raging battlefields to cinematic combat movements, the lure of an epic living breathing battlefield caught your attention. Conqueror's Blade has a lot to offer for players of all skill levels and gameplay preferences.

There are a lot of misconceptions when it comes to this little gem. When I was first introduced to Conqueror's Blade during the European-X test in 2018 I fell in love with it. It is that passion for this game that led me to create a community based around teaching people the finer points of the game.

Now I come from an MMORPG background and love consensual PVP. My community, on the other hand, has leaned more towards the PvE side for a while. When I presented it to the community many wrote the game off because they thought it was  "Just another PVP Game". This misconception is probably one of the biggest missteps in promoting this game because there is a vibrant world filled with content that doesn't involve PvP at all.

While Conqueror's Blade features some really great PvP, it is entirely optional. There is a large amount of content in the game that does not require PvP at all. Now I'm not saying you shouldn't give the amazing PvP in Conqueror's Blade a try, but I am saying that if you’re the type of player who does not like to PvP, don't write this game off.

To illustrate my point let me breakdown the types of content you will experience in Conqueror's Blade. 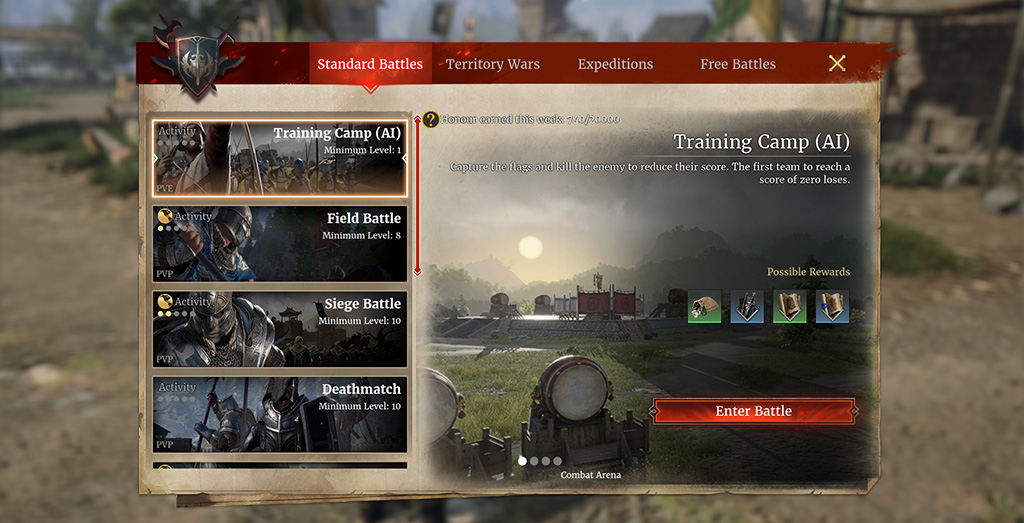 In the Training Camp battles, you face off with 5 AI opponents in traditional field battle style maps. The goal is to capture and hold various points on the map. It works like the traditional domination maps in most FPS games with a little twist. Each time you die your team loses 30 points, each time a resupply point is taken you lose 25 points and each time an objective change hands the losing team loses 50 points. The first team to hit 0 gets to listen to that sad song of defeat. This mode is great for earning fast bronze and the occasional bag of silver. They are also great ways to complete your 3 daily quests for 1, 3 and 5 field or siege battles. 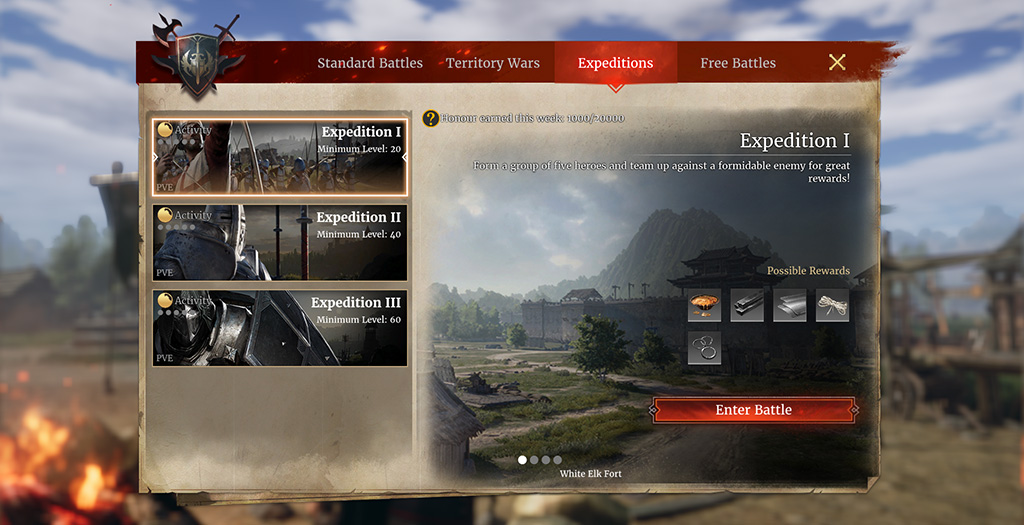 There are 3 tiers of Expeditions and each one adds a new twist. Higher difficulty brings higher era troops up through silver. Each Expedition will have a clear objective from defending a fort to save a village. Many are scripted fights that follow a chain of events, regardless of how well you fight.

These are great ways to earn honor and experience for your troops and also provide you with Weekly Quest Completion. There are 4 weekly quests for each of the 3 expeditions. Completing them will reward you with crafting supplies, silver, honor and the occasional battle relic.

Along the roads and hillsides of the world map, you will find wandering Rebels. The Yellow-Orange ones typically will leave you alone unless you stand on top of them. The red ones will spot you and chase you down demanding your money or your life. You can fight any of these rebels and can even extort them if you engage the fight first. These fights can provide you with supplies, weapons, armor and a wealth of rebel equipment you can turn in for Fief quest rewards. These can be soloed in most cases, though you might want to bring a friend for the higher-level ones.

Rebel Camps can be found in the open-world map represented by red camp Icons with 1 to 3 Helmets signifying difficulty. These encounters are like traditional siege maps with a twist.

There are a total of 3 Resupply Points, and 4 Capture points on this map. When a player steps into a capture point it will start an onslaught assault at the capture point. It is very important to prepare before beginning the capture.

By completing these events you can receive weekly quest rewards, rebel trophies for Fief Quests, and occasional bonus loot in the form of silver and crafting materials. 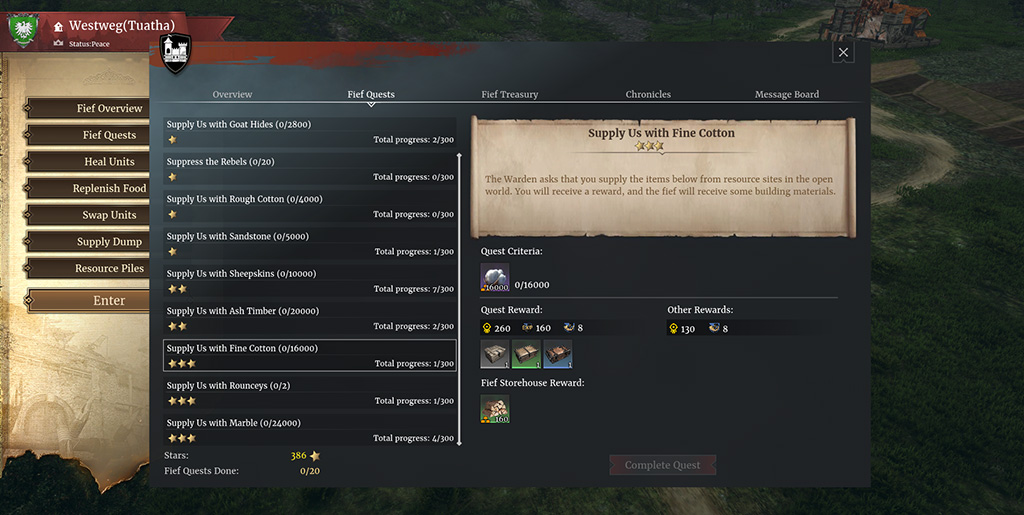 This is quite possibly the fastest way to earn Honor in the game. You can earn from 50 to 700 honor per Fief quest and they reset daily allowing you even more opportunities to earn Honor. You can do a total of 20 per week so aim for the higher ones if you can.

To complete a Fief quest you must have the desired material in your wagon. Then talk to the Warden in the Fief or click on the Fief from the world map and go to Fief Overview. Once the overview opens, click on the second tab "Fief Quests". The ones you can turn in are always at the top. You can cursor over each of the required materials to see how many you have in storage and on your wagon.

We have seen a few special events rotate into the mix. From the Sea Rebel invasion to the Halloween themed events, these take the form of an Expedition and can range from easy to extremely difficult. The rewards for these are typically limited to a certain number of times per day. Doing more than the allowed allotment will provide drastically reduced rewards.

Available 24/7, these 10v10 battles place players of similar ranks up against one another in a domination style skirmish. Around the map, you will find 3 capture points that each team will fight over. The first team to reach a score of 0 loses the match.

Always available through the Battle (J) menu, siege battles are 15v15 engagements where the attackers must assault various capture points before the time runs out. Each point will grant the attacking force 3 additional minutes to capture the final point.

Twice a week for 2 hours, the deathmatch arena opens. 10 players will face off with another 10 players without their soldiers to back them up. It will be warlord vs warlord in a race for 30 Kills.

There's no better way of practicing your newly found skills than partaking in a daily duel with a friend. You can challenge anyone you are near to a 1v1 duel. Best of all just by doing it, you complete a daily quest. This is a great way to try out various skills and positions to see which is most effective. 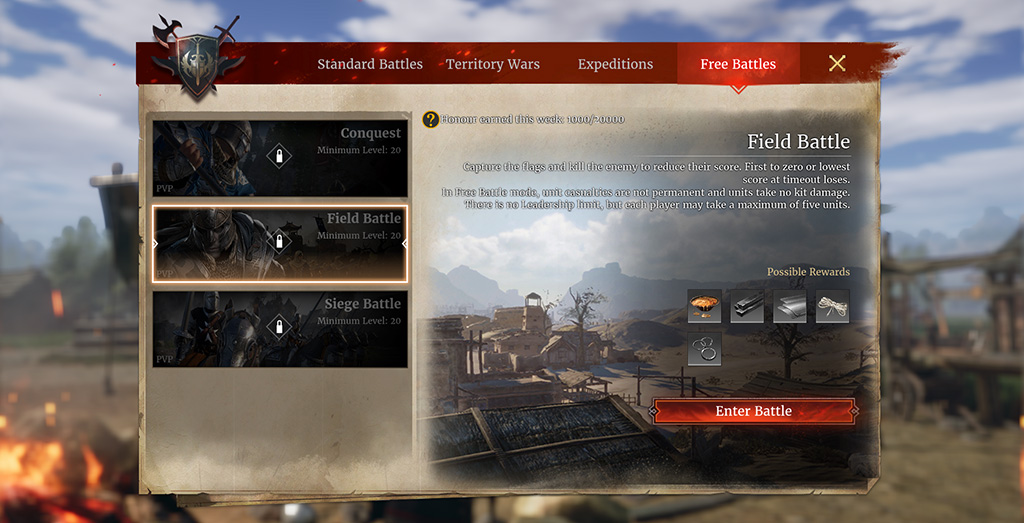 Free Battles open 3 times per week for 2 hours and rotate between Siege, Conquest, and Field Battles. In a Free Battle, you can use any troops without a leadership limit and without repercussions. This is a great way to earn your troops some valuable experience without having to pay a repair bill.

As you roam the open-world map you may encounter other players. You can choose to pursue and attack them or you can simply let them pass. The open-world outside of the capital cities influence zone is PvP enabled and while it's not often you'll be attacked it is possible. The winning party recovers some of the spoils the other player was carrying in their wagon. The losing player wins a 3-minute reprieve from being attacked again. 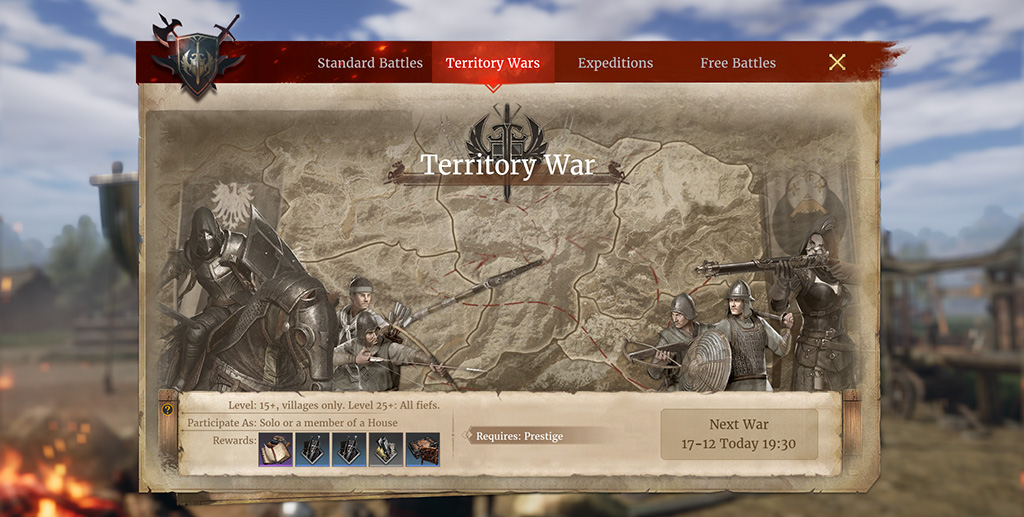 This is what most people consider the endgame of Conqueror's Blade. To participate in Territory Wars you must belong to a house or alliance. Twice a week for 1 hour the world becomes a battlefield. In this time you can assault territories and make a name for you and your comrades.

To take a territory, a house must declare war on the fief, which turns the owner of the fief to a Hostile House for your entire alliance.

The Battlefield is Your Playground

As you can see there is a wealth of content for any player with new special modes being introduced every couple of months. Whether you're leveling up a new unit, gaining a level for your hero, or unlocking new skills, the battlefield is your playground.

If you're new to Conqueror's Blade and find yourself on the Cloudwing Valley (NA-West) server be sure to look up Gaiscioch. We are a house devoted to helping the entire server community. Through low taxes, top tier fief quest availability, keeping our land open and accessible to everyone, and by writing guides for new players. We also produce the ConquerorsBladeHub.com and host a post Territory Wars livestream titled "The War Report"