Cosplay, Competition and the Casual Player at MCM London

With a growing roster of titles on show, London’s McM comic con is packed full of adventures for gamers. Independent developers are just a skip away from gargantuan publishers while icons like Nolan North are practically regulars. I have counted cosplays from Guild Wars 2, World of Warcraft, League of Legends, Starcraft, and any number of franchises that adorn the ESL e-sports league roster. Now, ESL adds Overwatch to that list with the arrival of the 2016 Contender Series Cup at McM London.

ESL UK has been bringing games to McM for years now and it seems to be the perfect place to showcase a brand new addition to the ESL UK Premiership competition. Anybody with the skill to triumph in the ESL’s Contender Series can make their way to the Premiership finals and some serious earning potential. Around £34,000 of prize money is split between the various Premiership games and Reason Gaming are assured some of that with their victory in the inaugural ESL UK Premiership Overwatch finals. Reason fought off stiff competition from MnM gaming, in a somewhat hectic final. Their teamwork and an outstanding performance from Realxz, playing as Mei, saw them come back from an initial setback to claim a 3-1 victory. A packed auditorium and thousands of concurrent twitch viewers watched Reason close out a final that was ultimately dwarfed in size by the 2016 League of Legends World Championship Finals, taking place across the same October weekend.

Despite this disparity between these two competitions taking place across the same weekend, the MD of ESL UK doesn’t see a failure. Far from it. It seems that McM may in fact be the perfect place to bring gaming back to the players. James Dean told me a little about ESL’s history with McM comic con. 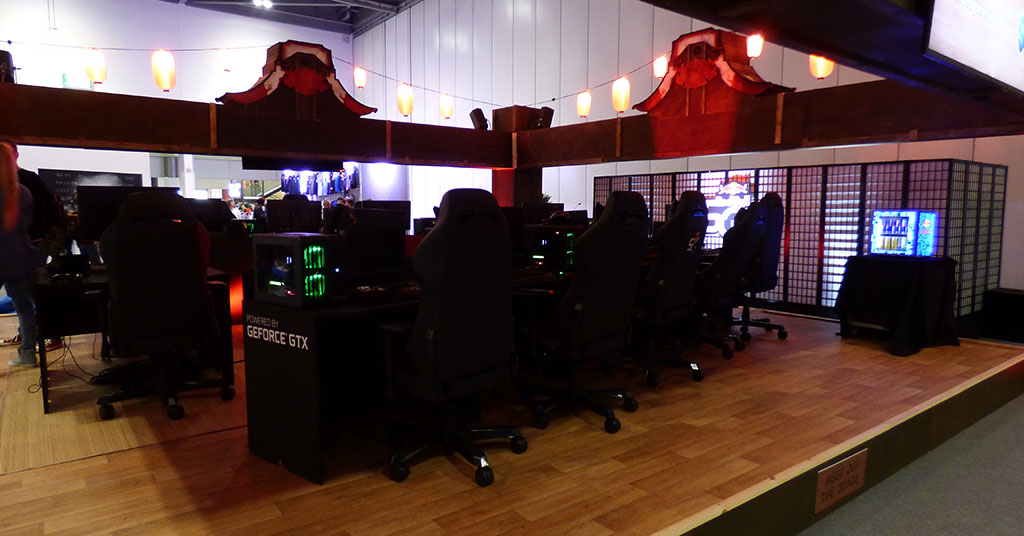 James: This is our 7th comic con in the UK. We started off almost by accident. We decided to do a show, put it together in 2 weeks and we had such good feedback from the community that we decided we had to do it again. That just grew and grew and grew, so every year we put more money into the stage, try to make a better experience for the players. Back in the day we’d just be giving a ticket to a player. Now, the teams we invite down, their travel is paid for, their hotel is paid for, we can take them out for a party, we can give them a lot more now.

To the casual observer, the League of Legends WCS finals in LA might seem like a crazy world away from the local comic con. Most cosplayers will never see the inside of an ESL party yet this year’s McM saw a fundamental move to bring games back to the show floor.

Just opposite a rather imposing ESL auditorium sat a slightly more approachable booth, inviting gamers to lounge around on its oversized cushions and sign up for the Red Bull 5G tournament. Inspired by 5 v 5 martial arts competitions, the Red Bull 5G tournament also opens up competitive gaming to the public. With none of the trappings of professional gaming, the UK Red Bull 5G tournament pits north against south in one of five games. Players can sign up, choose a game, and start to progress towards the tournament finals, potentially making it from their front room to Japan.

Both the ESL Premiership Finals and Red Bull 5G tournaments at McM London are part of a clear move to widen the e-sport’s audience and make it more accessible. They are a showcase of what is possible, just by getting involved. By bringing a mix of semi pro and amateur gamers to the show floor, these types of events seem to be aimed at convincing the McM audience that they really could be running the cosplay masquerade and progressing and fighting it out for a trip to Japan on the very same day.

Much of McM’s patronage are not the typical e-sport’s aficionados. They are not necessarily the same players that turn up regularly to the local Barcraft, or spend hours finding the optional meta build. A substantial number are casual players and many of the games on show across the floor will be familiar to them. Overwatch, Rocket League, Hearthstone, and Street Fighter are relatively young games, all represented in these tournaments, but with a huge casual player base. Bringing new titles to an event like McM can be full of risk and James told us briefly about how ESL managed their roster.

James: The way I look at this is by asking how you define an e sport because every game is competitive. Then looking at when it becomes an entertainment platform with people playing live and with commentary. We look at it and see that any game could be an e sport. You could play Pokemon Go e-sport. I don’t know how it’d work, but you could probably do it. You need to look at that community and it’s desire to watch, create, get involved and play. What 5G are doing is great because they are taking these five disciplines and going out to the global final.

Another reason we would choose a title is because of a publisher. They identify the community, and they actually want to support the game and push it forward. Ultimately, whatever game it is, each game will get to a certain size based on the commitment from each community. There are times like this, like the Guild Wars 2 Pro League, with the investment that was put behind from ESL and NCSOFT. What we were trying to do was see how far could it go and how big could it grow and with the numbers that came out of that, a decision was taken not to continue with that format. That doesn’t mean that they don’t care about the community. It’s just the fact that it got to that level.

James: We will see. It’s interesting because our first league here was League of Legends and that was a no brainer because the amount of League Cosplay at McM is incredible. I’m sure I’ve seen a few Tracers around already.

After a ludicrously short hunt, I found legions of Tracers and flocks of Mercy patrolling the floors of McM, a clear demonstration of the astronomical success Overwatch has achieved. With over 20 million players in its first five months alone, this competitive co-op has a huge fan base that absolutely came out in force for McM London. I spoke to James a bit more about introducing tuning that interest into the ESL Premiership.

James: Overwatch is an interesting one. What we’ve found is that the UK does have a pre established e sports scene centred around CS:GO and League of Legends on the PC side of things but there seems to sometimes be an unwillingness to push it forwards. So we added Hearthstone earlier in the year because there are some good UK players and that just bloomed into a huge success for the UK premiership. We started to see numbers and commitment and really great entertainment out of that, which we hadn’t expected.

As a result we took a look at a fresh new game for the premiership specificity that will get a new audience in. So Blizzard is obviously making Overwatch with e-sports in mind. It’s the first game they’ve had an e-sports expert within the development team while building the game and I think competitively it’s doing extremely well.

We only added Overwatch in the UK Premiership this season, so this is it’s first final and what we are hoping to see is that continued commitment from a fresh audience. Already we are seeing the pro scene riddled with UK players, which is testament to the grassroots of the game.

Without that invested grass roots, e-sports risks alienating itself from its player base and ESL already works hand in hand with the growing e-sports community, hosting tournaments at Epic LAN, the National University E-sports League, and even opening up their studio facilitates at ESL’s new UK studio in Leicester. Based on James’s comments, the Contender Series is just a part of ESL’s push to bringing e-sports back to its base.

James: So actually the grass roots is completely endemic to our plans. That’s exactly where e-sports came from in the first place. ESL is over 20 years old now. It started in Cologne back in the day and has had quite a few changes over those years, as you can imagine. When it first started out it was all about people just playing together at a grass roots level and then eventually finding the best players.

The real change more recently has been that streaming has been becoming very popular so the viewership started going out of this world, mainly centred around Twitch’s popularity. When we started seeing the million concurrent viewers for big League of Legends or CS:GO matches, the production levels were just going out of this world to the extent that the world looks at it and goes “what the hell’s going on here?”. It obviously grabs a lot of attention, but meanwhile we are absolutely, fundamentally, across all of our 15 offices throughout the world, continuing to work on that grass roots game. If we lose that grass roots nature then we loose the heart of e-sports. This is testament to the work that ESL does. The fact that we’ve been growing the premiership over the last two years, the UK office is about four years old now, and we just need to create a space where, from the Contender Series and going on into the Premiership is an opportunity for people locally to find a career, potentially, in e-sports.

Right now, if you are a top team in the UK Premiership you’re still not full time, you’ve still got a job, although you’re actually earning some good money. There are a few more leagues popping up in the UK recently, which is great, but it still has quite a long way to go. That said, we are starting to see some real development of that career path extending. The winners of today, for example, in the League of Legends tournament will go on to have a qualifier slot in the LCS. Earlier last season we saw MisFits go on to get through the qualifier stages. I know they changed names but that achievement is super important.

Still, developing that career path relies on continuing to grow interest in all levels of e-sports. As traditional media fails fairly ubiquitously to tap into e-sports potential, new ways of turning casual engagement into genuine interest are necessary. Tapping into the infectious culture of participation that permeates comic con’s seems to be working for ESL.

Are events like comic conventions the right place to grow e-sports or should tournaments like the UK Premiership and the Red Bull 5G series be spending more time focused on growing the best of existing talent? Let us know what you think. 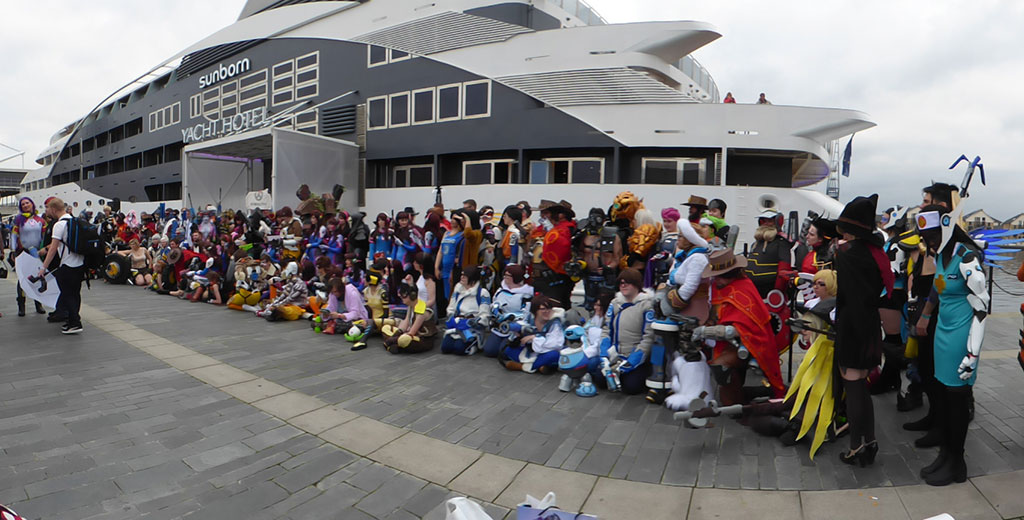