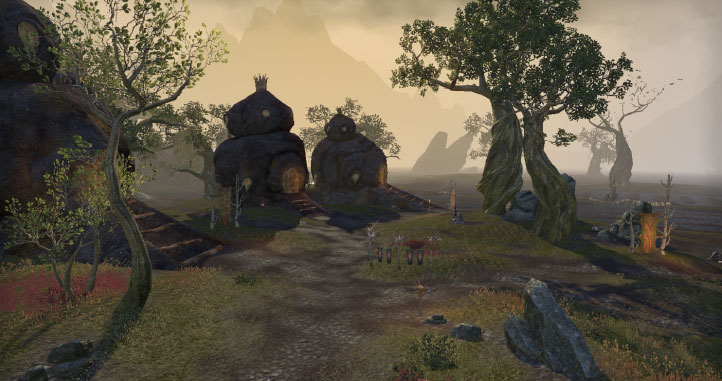 We found ourselves once again crossing paths, this time it was in area called Deshaan, a land that was a broad, fertile area in the southern mainland of Morrowind which slopes down and merges with the swamps of Black Marsh further south. Kyla Rose had sent word to the rest through the Mages and Fighters guild that our skills would be needed once more by the Ebonheart Pact to investigate an area called Darkshade Caverns. Over the course of the next few weeks, one by one we gathered at a small dirt village called Silent Mire.

I was the last to arrive of the group having been gone for many months on a task that I needed to achieve for myself in the lands of the Rift. The other three Kyla Rose, Selrina and Pops were staying at Seek-of-the Nights house when I arrived. We spent the night catching up on what each one of us had been doing over the last several months. Kyla Rose said she had been spending much of her time with our extended family in the north lands of Cyrodiil fighting in the Hopesfire campaign, trying to retake that lands that are rightfully ours by family. Pops simply said that he had been traveling the lands on one adventure to another not really giving us many details, as we have come to know our leader for the four of us. Selrina, the closest one I know of as family, explained that she had traveled many different lands learning the skills of enchantment and increasing her knowledge of magical weapons. For me, there is not much to tell what I have been doing and who I have been living with over the last few months. One just has to look at my eyes, they could see what I had become.

We set out in late afternoon to the Selfora Wayshrine, where we had planned to spend the night before pushing on in the early morning hours to Darkshade caverns. 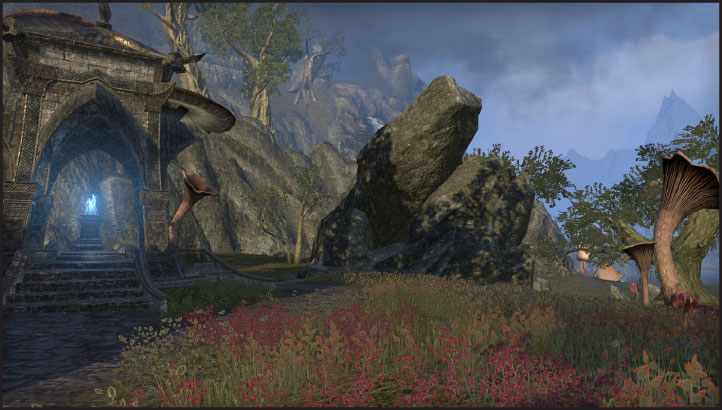 Pops took the first watch of the night as we all lay down for rest by the campfire just outside of the Wayshrine. I had the feeling that there was unease in the air, as the others ate and had mead for their evening meal, which I did not partake of. My food comes from a different source now and would not be one that the others would enjoy to take part in. But we all must choose our paths, as I did mine, and we were happy with my choice in life. As the morning came to a shiny bright day we found our group on a bridge leading up to the caverns. One would think that there was nothing amiss in this area because of the beauty.

Upon entering the caverns, we started down a long narrow tunnel that never seemed to end, but all around us were eggs of some kind that seemed to be in a state of growing or being farmed for some use. As we rounded a turn in the cave we found a group of Pit Rat Thugs doing just that, taking the eggs and carrying them away for who knows what reason. After quickly sending these thugs to their gods above, we pushed on further into the cave. Standing in front of us was the leader of this group of thugs, Head Shepherd Neloren. It turns out she is raising Kwama warriors and works for some plan of hers and her boss, the Foreman Lothian. Neloren had some tricks up her sleeve, but nothing that we could not take care of as she was finding out what made up the afterlife. Going deeper into the tunnels we had run across various groups of Kwama, both workers and warriors. One could say they make a good snack to munch on, if one likes dead bugs for breakfast. We came out to an open area where Lothian himself liked to hang around and tell his workers what a big shot he is down in this cavern, or mine as to what I am starting to believe it to be.

Foreman Lothian did not seem happy at all to see us in his office, as one would think he would call it. In fact he got downright nasty and the four of us had to put him in his place after he shot us with nasty green thingies, as Selrina came to call them. But after running around and looking out for each other, the Foreman was now enjoying a very peaceful rest by the look of it.

Running up the tunnel we went through a door that led us out into what appeared to be a very old city that once had held many races and riches from the land above. But now it was only home to bugs and giant netchs that no one would want to spend the night with, not alone their worst nightmare. As all good things come to pass, Kyla Rose led us into battle with these bugs of the underworld, with Pops handling the healing, what little was needed, as Selrina put the final spell on the Hive Lord to bring him to an early grave of green blood and broken shells .

As we come to a close to this simple story of four, we find ourselves facing the final trespasser of this cavern, the Sentinel of Rkugamz, a fearful beast one would say or simply another bug in the light that needed to be stepped on. When you come across him in your group, think about your skills as one and then as a whole because it will take the whole of all to bring this one down to his death. 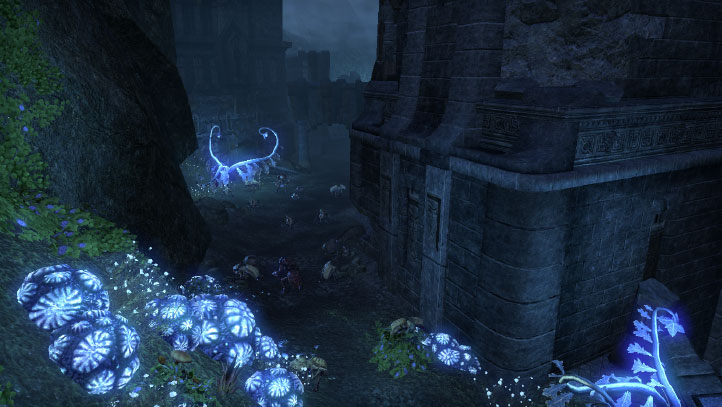