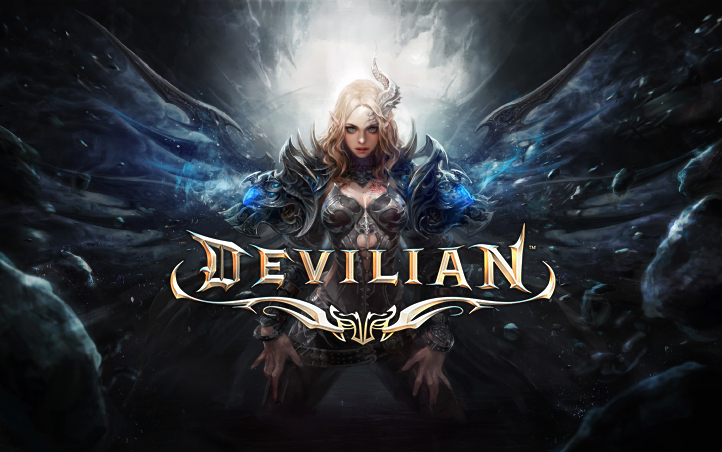 In days past my childhood was filled with adventures and exploration. The first time was when I touched Zelda and experienced the predecessor of future Action Roleplaying Games (ARPG). As time passed companies such as Square Soft, famous for the Final Fantasy games, would try their hand in ARPGs with games like Final Fantasy Mystic Quest on the Super Nintendo. Then the PC boom brought us Diablo. Anyone who played ARPGs in the 90’s remembers those days where in the immediate wake of Diablo sprung literally hundreds of clones and variants. Like today’s MOBA, in the 90’s ARPGs were the hot ticket.

Over the years the ARPG has evolved. From games such as Baldur’s Gate: Dark Alliance, Dungeon Siege, Everquest: Champions of Norrath, and of course the legendary follow up Diablo 2. Each game brought new ideas and new ways to tell a story in an ever evolving market.
Then the MMORPG boom happened and the ARPG began fading into the past with only a few ARPGs launching between 2005 and 2010. It took nearly a quarter decade for ARPGs to make an appearance in the MMORPG scene. There have been several formidable contenders over the years including Lineage, Guild Wars, and Path of Exile. We’ve had a fair share of successes along the way and surely no shortage of failures.

Over the past month I’ve had the wonderful opportunity of getting my hands on a game by Bluehole Ginno and localized by Trion Worlds for the western world by the name of Devilian. While my first impression watching the short few videos floating around cyberspace was “Meh”, the moment I downloaded the game all that changed. From the character creator process to the very first moments of the game you find yourself intrigued. This new MMOARPG is free-to-play, and features an in game cash shop with a large selection of pets, mounts, costumes, and buffs to help your adventure. 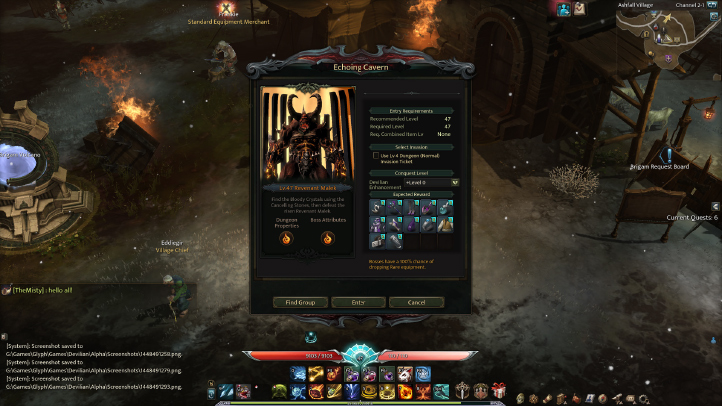 Devilian possesses real depth for a MMOARPG and has a personality of its own. One of the most stand out features is its ability to shape content around the group. It is amazingly balanced based on how many people you bring into a dungeon with you. The dungeons are fun and have their share of epic moments.

The bosses at the end of the dungeons aren’t your standard boss fights. They have amazing depth and you find yourself at a constant struggle of on the fly learning the bosses mechanic and adjusting to it as it progresses through the fight. What starts off as an easy fight might end as one of the most nail biting experiences of your gaming life. There have been many moments where I was certain I had lost, only to survive with only a few hit points to spare.

Dungeons have 3 levels of difficulty ranging from normal, to nightmare, to hellish. They also come in several forms including Dungeons, Raid Dungeons, Archdevil Dungeons, Guild Dungeons, and Instant Adventures. Additionally you will find Rifts throughout the world that when opened feature large scale events for players to gather and defeat. 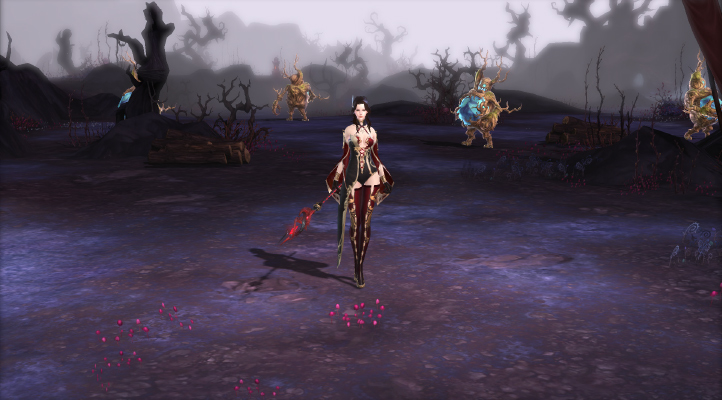 Loot in the game is plentiful. Bag space however is limited. Not as limited as say Path of Exile but not as free as many other MMORPG’s on the market today. Right out the gate I was given this magical corgi that could carry 16 additional items and even sell them while I was in the field. I became so attached to that little guy that after his 7-day timer ended I was saddened and decided to indulge in a whole box of Fat Boy Ice Cream Sandwiches to mourn the loss of my 16-slot Doggie Salesmen. The good news is that you can salvage, craft, enchant, fuse, refine, and identify items anywhere in the game to get rid of those pesky white trash loot items.

Additionally there is a lot of loot that can be purchased with certain currency earned from completing daily quests, zone quests, dungeon quests, PvP Matches, and even fighting your way through the competitive Abyssal Tower. Overall you will find heaps of loot, and even some storage expansion runes to expand your inventory and bank space. 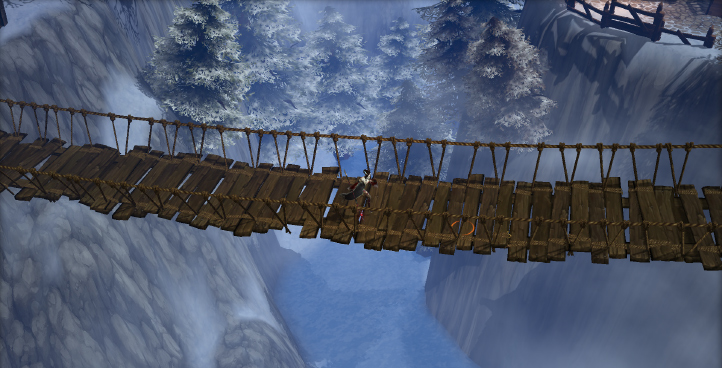 The world is filled with challenging content. From the Archdevil Dungeons, Raid Dungeons, Guild Dungeons, Rifts, Co-Op Encounters and Abyssal Tower there are scores of challenges awaiting even the most hard core players. Places like Guild Dungeons and the Abyssal Tower even come complete with leaderboards where you can measure your prowess against your peers.

These can be completed solo with a friend or with two friends for loot and some of the best experience in the game. You can also find dungeon specific gear throughout the dungeon and every time you complete a dungeon you receive a grade. Depending on our grade you get to spin the great wheel of loot! Each spin you have the chance to win one of many items displayed on the screen. Prizes include potions, bonus exp, bonus coin, and even expansion slots for your inventory and bank.

Need the gear but don’t want to run through the whole dungeon? That’s ok! You can fast forward to the boss fight by using one of the many dungeon adventurer tickets that drop throughout the game. This allows you to skip the trash and go straight to the end.

These are tough and large sprawling dungeons that typically span multiple floors. You should plan to spend 45 minutes to an hour in these and will face off with major boss characters at each phase. Some of these fights can be a mix between on the fly puzzle solving and what appears to be an overkill version of frogger. These must be done with 3 players and can not be entered solo. You will find some of the best loot in the game for your level within these difficult dungeons.

These are designed for 9 players and feature some of the hardest challenges of the game. Guilds can join together and run these for increased Guild Points which allows guilds to pay their taxes and increase their guild rank. In my short time playing I was not able to explore these, however I was able to watch several guilds take these on and all I can say is, If you’ve experienced the mayhem with 3 players imagine what it would look like with 9. Yeah total joyful annihilation!

Most zones in the game have areas and quests for groups to perform. These are exceptionally difficult and giant raid bosses tend to roam nearby. You can earn coins for completing these quests which will let you buy special gear and items to open the Rifts throughout the zone.

These are very similar to the game RIFT. They are noted by an Icon on the map and by traveling to the area you will notice a tear. Use the key obtained from the token merchant or by slaying the area boss to open the rift. Survive the wave and compete with others for top prize. These are very challenging, however I was able to solo one after spending 20+ minutes kiting things around and running for my dear life. 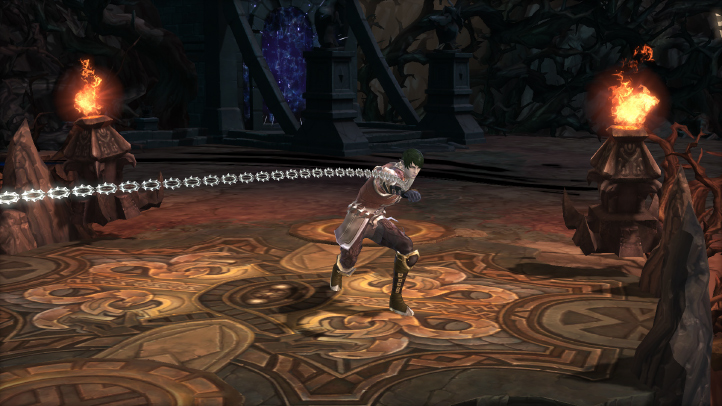 These spawn throughout the world and print a message on the top center of your screen letting you know where and what channel they spawned in. When you see these start working your way there. These are massive encounters that are quite enjoyable when you have friends helping you. These encounters are designed for 10+ people and like rifts have a sliding scale for loot.

A note to those that say “Hey I can solo that”. I tried this and managed to solo one boss.... It took me over 45 minutes. That was a 45 minutes of non-stop spamming my keyboard. Bring friends. The experience and loot you get is the same thing whether it was 1 person killing it or 10 people killing it. So save your time and bring friends.

This is one of the ways I start off my playing. The Abyssal Tower has 2 styles. First is a challenge mode where you will complete a set of 10 floors per day. The second mode is survival mode, where you continue until you are killed. Both modes stack your rating against others and depending on where you rank at the end of the week you will receive bonus loot in the mail including gold and cash shop currency. 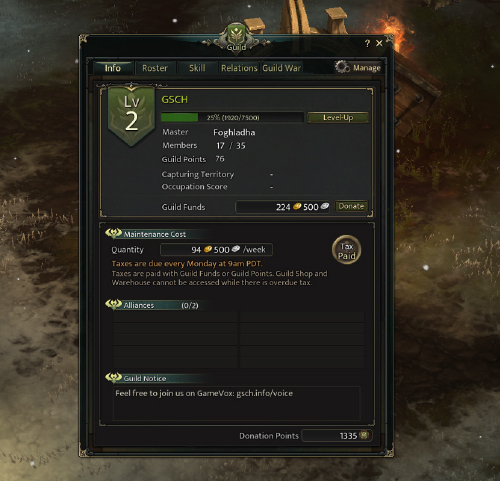 The Guild System in Devilian is quite significant. There is a weekly tax that guilds must pay to remain active. This tax can be paid in coin or by using your guild score to settle your debt. You can earn guild score by doing daily quests, grouping together and doing several other daily tasks.

The Guild System UI Consists of an Overview, Roster, Perks, Alliance, and Guild War tab with a Management area that contains a few new tabs that include introduction, applicants, alliance requests, and permissions.

As guilds level up by earning Guild Score they begin to gain levels which unlock new abilities for it’s members.

The endgame for guilds is broken into 2 fronts. The first of which is Guild Wars which are in the form of 20v20 PvP battles. Each guild is ranked based on their win loss ratio and a full ladder is available to look at for the top performers.

The second part of the endgame for guilds comes in the form of Guild Dungeons. These are massive 20 man raids that are quite challenging and should not be taken lightly. It takes coordination and timing to pull off these larger group challenges. 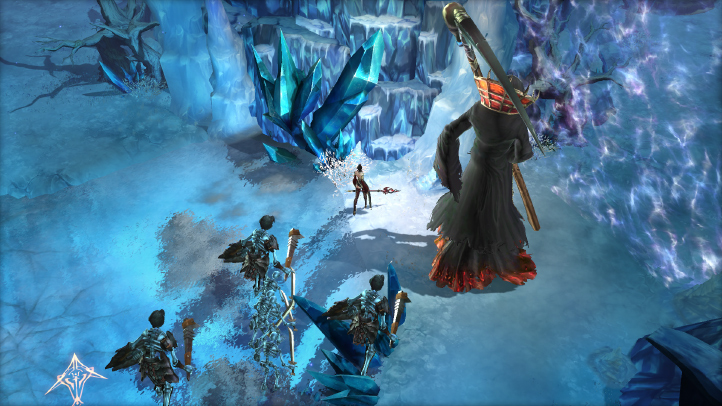 Now this game is crack for the Socialite. There’s actually a way that every day you can send gifts of bountiful loot to up to 10 friends and 10 guild mates of your choosing. As you play with these people the rewards improve. You gain a reputation score with each player that you add to your friends list and the more you interact the better your gains will be with this person. This concept is quite ingenious as it encourages you to forge lasting bonds with others and the longer the bond the better the reward. These gifts are free to send and can be sent once per day to up to 10 players. The game even suggests friends to you by your level and what zone you’re in.

All aspects of the game come with a simple integrated group finder that makes finding a group simple. In addition the co-op events even have announcements to rally people to them. All in all this game does everything it can to pair you up with people and help encourage lasting friendships. 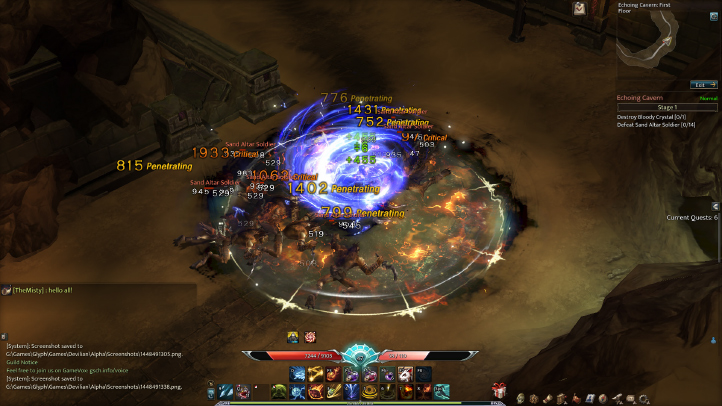 This is a breath of fresh air in today’s anti-social MMO movement we see in many popular MMORPG’s entering the market. While you can do everything solo except the Archdevil dungeons, guild dungeons, & raid dungeons, it’s always more fun with friends. This is one social centric game that goes above and beyond to encourage players to make lasting friendships.
For more information about Devilian visit: http://www.deviliangame.com/, Follow them on Twitter at: @DevilianGame or watch the Streams of Epic Adventure Episode 28 at: https://gsch.info/soea28