Dropzone - The future of real-time strategy? 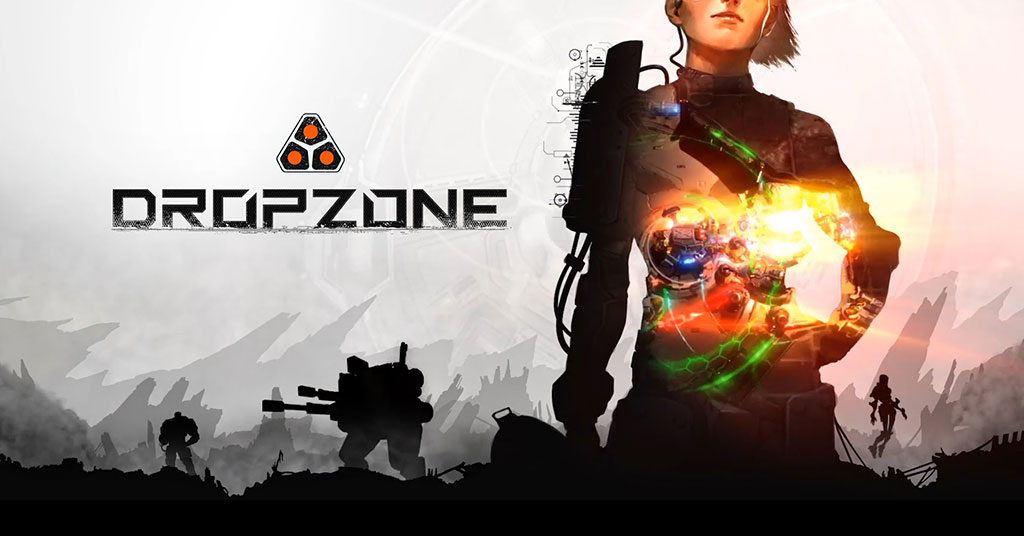 Dropzone is something of an anomaly. The first title from Sparkypants Studio is best described as a Real-Time Strategy game that borrows elements of the popular Multiplayer Online Battle Arena genre. It throws two opposing players into an arena and, over the course of fifteen minutes, challenges competitors to control a team of mechs, eradicating an alien invasion and scoring points in the process. While this sounds a lot like a traditional MOBA, the entire experience is billed as a fast-paced strategy title that hauls the RTS genre into the modern age. With so many strategy games simply caving under the pressure of consumer apathy, I visited the recent ESL Dropzone - Clash in Cologne to take a closer look at Dropzone and find out what is different about this game.

RTS games are a long-standing feature of the gaming landscape. From Westwood Studio’s seminal Command & Conquer series, to the Total War franchise and the phenomenal StarCraft, RTS titles have remained fundamentally unchanged over the decades. As gaming habits have evolved, the genre’s rigid adherence to existing norms has been in stark contrast to the rest of the industry. Massively Multiplayer Online games have become more accepting of a casual market, emphasising the social experience, business models have adapted to allow time-poor players to remain competitive, and the concrete lines between genres have started to dissolve. Outside of StarCraft, a giant that simply looms over the rest of the genre, RTS games have become a dwindling market. Recent entrants, such as the deceased Age of Empires Online, have struggled to innovate and retain an audience in the same way that competitors such as League of Legends, Heroes of the Storm, and even Clash Royale have. 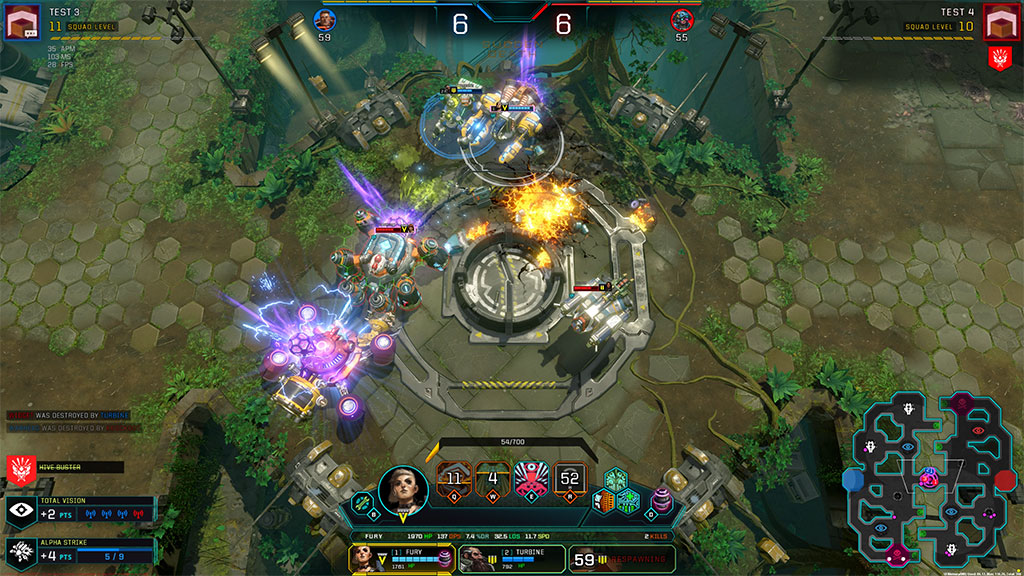 The team at Sparkypants Studios intend to change all that by breaking the mould and dragging the RTS into the modern era. Dropzone matches take place in an assortment of arenas dotted across Europa. Squads of mechs can be found thundering across this moon, eradicating a particularly aggressive alien infestation. These units align the classic RTS build tree towards a MOBA class-based system, falling into familiar support, DPS, and tanking roles. The Gunner, Mechanic, and Tank all carry a variety of equipment that can be fitted prior to a match. Various equipment combinations unlock a corresponding set of skills for each of these mechanical powerhouses. 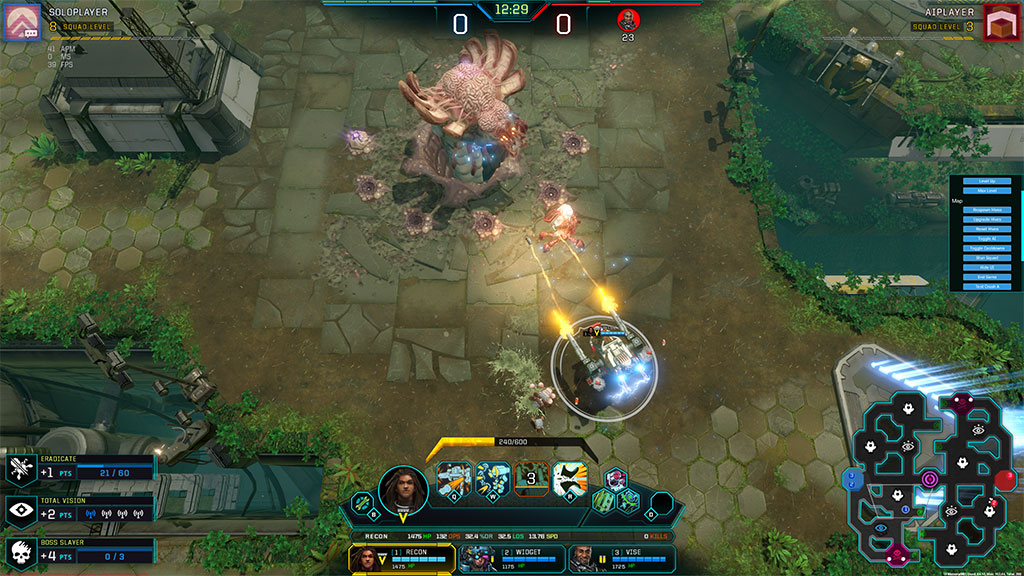 Every mech needs a good pilot and, like many MOBAs, these heroes are an intrinsic part of Dropzone. Each of the six heroes has a distinct personality, and their designs bring a very particular flavour to the fight. A unique set of passive skills and ultimate ability are available to every pilot, with Cortex and Recon proving particularly popular during the ESL showcase. This mix of flesh and metal gives real depth to Dropzone’s turn-based drafts, another feature borrowed from MOBAs. 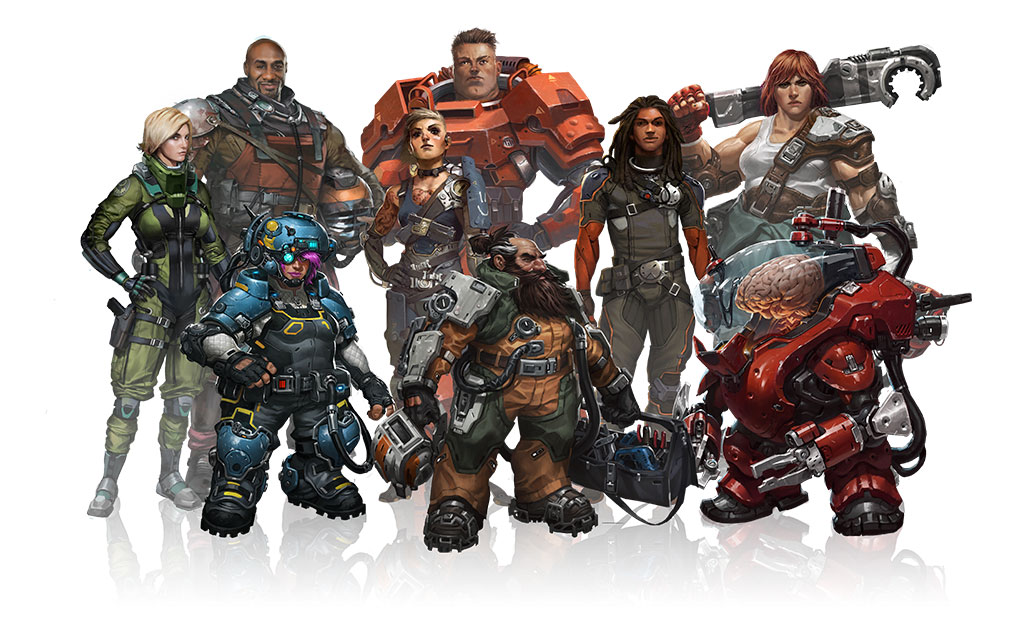 When battle finally does commence, Dropzone is far from sedate. Only fifteen minutes stand between competitors and defeat. Like many MOBAs, the relatively short length of matches forces action along at an unrelenting pace. In stark contrast, other RTS matches can have a much more considered pace before the shooting war begins. This makes Dropzone incredibly tempting to pick up and play. For the uninitiated, RTS can seem incredibly intimidating. Protracted matches, complex build systems, layered micromanagement, and a significant time investment can all act as a major disincentive to the more casual audience. Learning complex systems can feel critical and the time required to significantly improve can be off-putting. Sparkypant’s decision to move to a fifteen-minute window eliminates this barrier, allowing it to compete with other MOBA titles. It also makes the game incredible to watch. Dropzone’s small team size, obvious objectives and simple scoring system allows any calibre of player to easily follow a match.

Despite these innovations, at its core Dropzone still relies on great strategy. Although resource management has been removed from the map, it has been resolved into the levelling system. Instead of gathering minerals, players acquire experience as a pooled resource and distribute it between their units accordingly. Progressive levels unlock new mechanoid skills, giving competitors access to more abilities and directly affecting a team’s respawn timer. This elegant little twist has huge implications for the way Dropzone plays. Yaws demonstrated this during the ESL invitational in Cologne. His pedigree shone through, as he managed his units with the finesse of a seasoned Warcraft veteran. 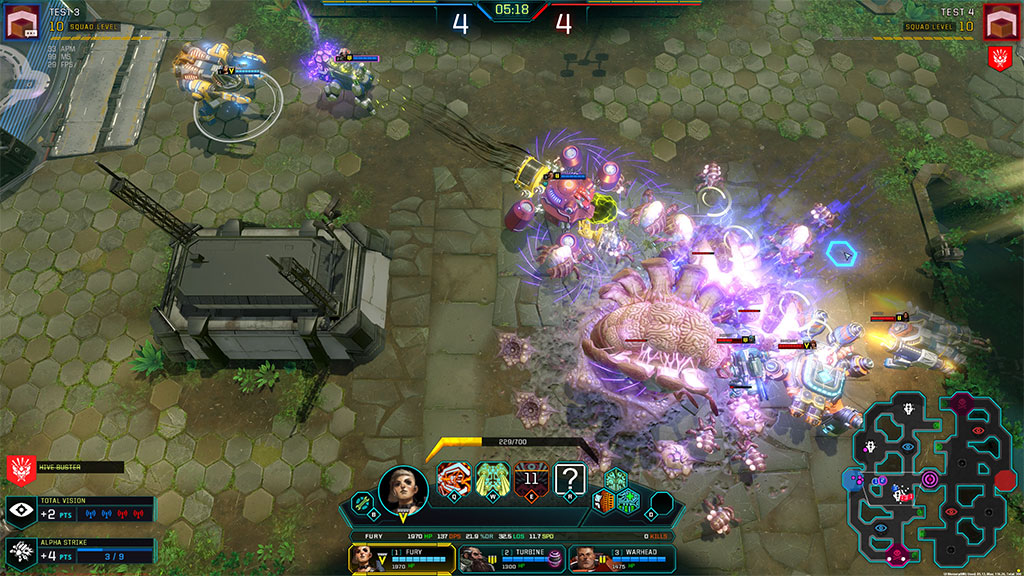 As I said, Dropzone is an anomaly. It is an RTS wrapped in a MOBA, and it has me hooked. If you are interested in seeing more Dropzone, you can sign up on the official website [https://en.dropzone.gameforge.com/] or watch out for more coverage when Gaiscioch gets to Gamescom 2016.