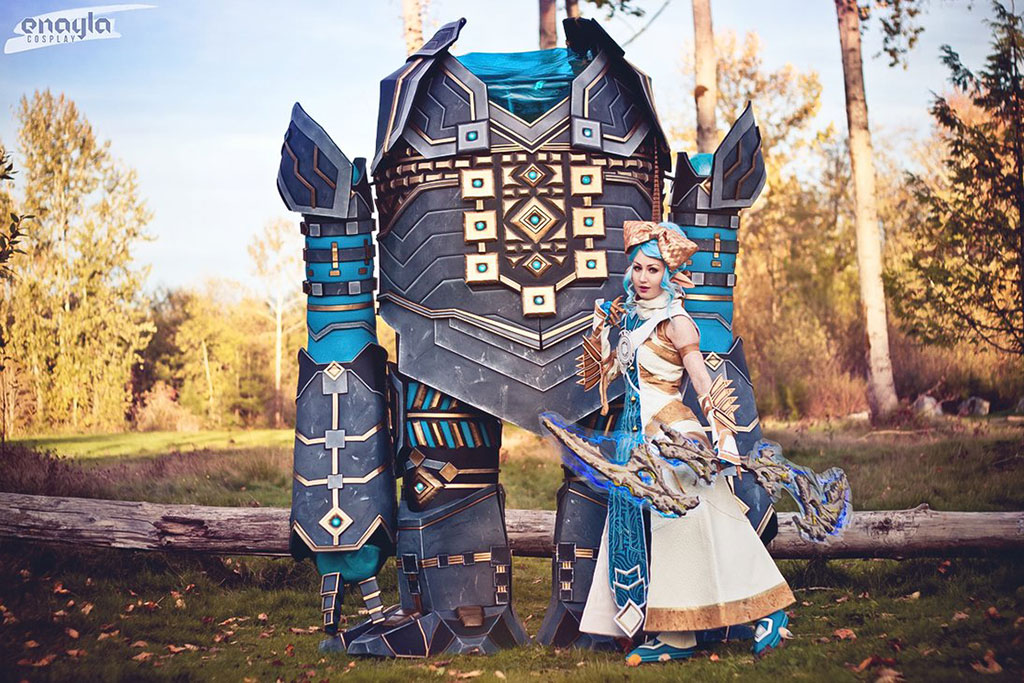 About a year ago I was greeted in the doors of PAX Prime by a massive 9 foot tall siege golem from Guild Wars 2. I thought “Wow, Guild Wars 2 is going all out forking over the big bucks for a prop.” Then I learned that it was actually made by a cosplayer fan known by the name of Enayla. My jaw hit the floor; I could not believe the level of detail on this towering life sized golem.

That was my first introduction to the world of Enayla Cosplay. A few years later, I ran across Enayla at a Guild Wars 2 party and managed to exchange information. Today, I bring you a very special interview with a young artisan who takes cosplay to heights I have never seen before.

Thank you so much for agreeing to this interview Enayla! To kick things off can I ask you to give us a brief introduction to who you are and how long you've been involved in Cosplay?

Hi!  I’m Enayla, cosplayer from Washington specializing in costumes that are oversized, highly detailed, or present an engineering challenge.  I’ve been cosplaying for just over ten years now, and have dabbled in sewing, armorsmithing, prop making, casting, and electronics for my projects.  Out of cosplay, I’m a programmer and avid gamer.

Your cosplays are amazingly detailed, it shows a true commitment to the art and experience working with different materials. When was the first time that you can recall making your own costume and what was it?

My first cosplay was the Mesmer cover art for the first Guild Wars game (which I was obsessed with at the time).  I was originally inspired when my parents brought me to San Diego Comic Con as a family vacation and I was awed by the spectacular costumes I saw there.  I got home, found a $20 sewing machine at a yard sale, and taught myself the basics of sewing with scrap fabric.  The costume wasn’t too complicated and wasn’t at all accurate, but I felt so accomplished when I finally put on this creation that I had made. 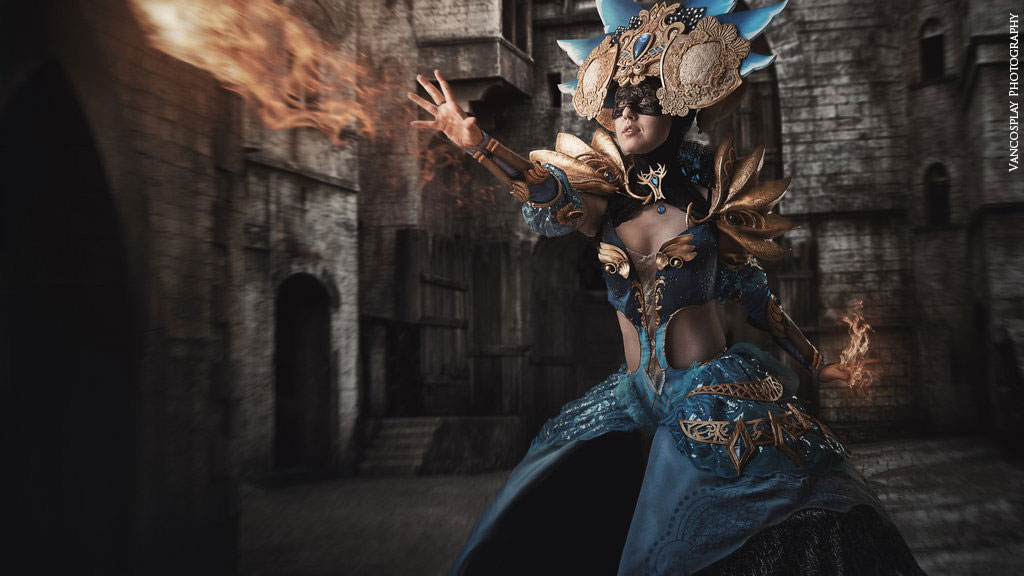 Over the years, I imagine you have picked up some new skills. Did you ever take any classes to learn these skills or did you learn them on your own?

I’ve never had any formal training for costume or prop work, but there’s a massive amount of literature and tutorials floating around the internet which I’ve made good use of over the years.  Otherwise, I’m a huge advocate of experimentation with new materials and techniques.  Because of the nature of cosplay (recreating a virtual character in real life), oftentimes there simply won’t be an established way to create a costume piece.  Instead, I learn through trial and error, and if I discover something that works, I have another technique to apply to future projects.

Let's talk about your Guild Wars 2 golem. The first time I saw this marvelous thing I had no idea you made it. I thought it was a prop built for ArenaNet. Just how long was the process of making the now famous piece?

My golem from Guild Wars 2 was my project over nearly a year, although I was a full-time student and didn’t have nearly as much time to spare as I would have liked!  I was also working on my accompanying Asura cosplay at the same time.  Still, it was easily the most extensive costume that I’ve created.

What materials did you use to make the golem? Were there any pitfalls you had to overcome in building it?

The golem is constructed from a PVC pipe frame and EVA foam ‘skin’, sealed and painted with acrylics.  Unsurprisingly, the biggest struggle with this project was its scale.  It stands 9ft tall and 5ft wide, which presented a whole host of challenges (not least of which was that I made it in a tiny apartment where there wasn’t enough room to even put the whole structure together!).  It also isn’t a humanoid, so my usual tricks for constructing torso/arm/leg shapes didn’t apply.  I ended up making quite a few scale models and mocking up the skin with cheap poster board; even so, many pieces took several iterations before I was happy with the result.

I have to know. How do you transport a 9 foot golem around town?

I built the golem to break down into a bunch of smaller pieces and can actually fit the entire thing in my compact car (albeit without any other passengers..!).  The structure separates with screws and the skin splits at the seams so that it can be nested and stacked.  It’s about a three-hour reconstruction process, though, so I’m still trying to work out an easier form of transport. 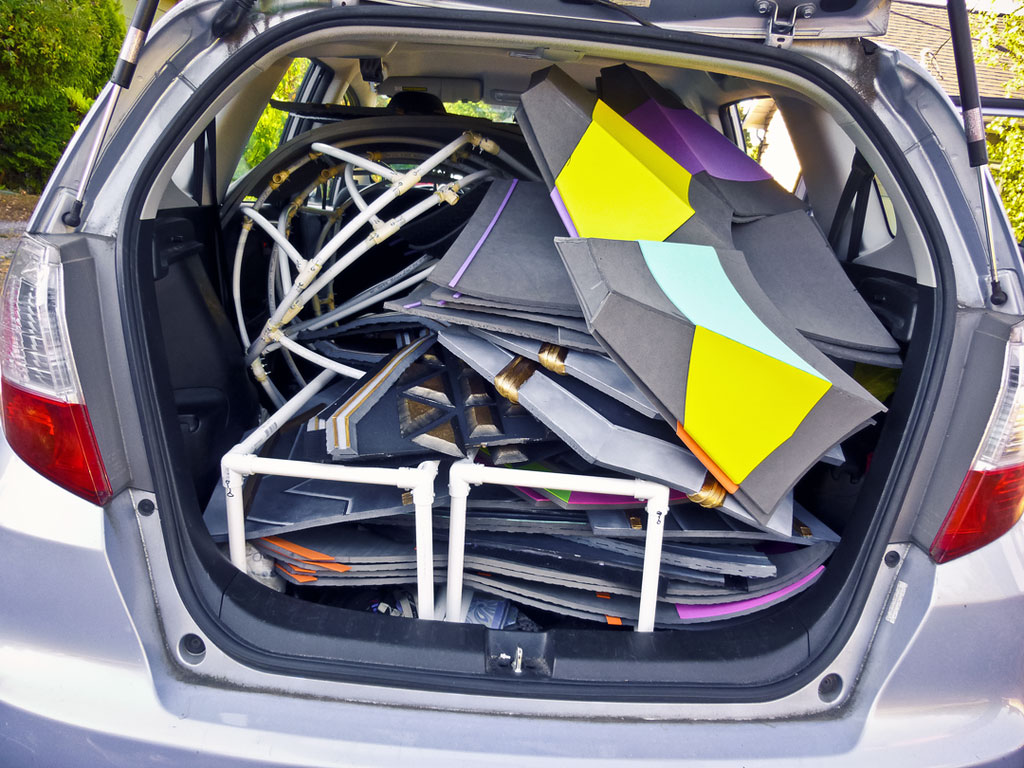 So apart from your Guild Wars 2 Golem, I understand you've made a great deal of other Guild Wars 2 themed cosplays. Would you like to tell us a little about your other cosplays (need pictures).

It’s no secret that I love Guild Wars 2, and a good portion of my cosplays represent that.  To date, I’ve made three armor sets from the game: the Masquerade, Inquest, and Orrian sets (light, medium, and heavy armors, respectively).  GW2 characters have a distinctive yet varied look to them, and I’ve had such a good time recreating my own characters in real life.

I've also caught some of your stunning Dragon Age cosplays. The thing that really jumped out at me was the way you use fabrics. Can you share a little about the process of choosing the right fabrics for the cosplay?

When fabric shopping, the first thing I look for is accuracy in color and sheen to capture the overall appearance of a character.  That said, I’m a huge fan of fabrics with unusual patterns or textures, and I tend to substitute a more interesting fabric even for characters with ‘flat’ looks.  I’ll also think about the character’s background – a princess is more likely to wear silk and satin, while a hardened warrior would go for roughspun cotton and leather.  In addition, I have to think about the application, since certain fabrics can drape or hold structure better than others.  If all else fails, I’ll customize my own fabric with dyes, fabric paint, or embroidery.

What has been your most problematic material to work with?

Resin casting has always been a technique that I struggle with.  I've had quite a few failed attempts at casting props, and since resin mistakes are so expensive, I admit that I haven't tried to tackle one in a while!  I actually have some pieces to cast for my next project, though, so I’m going to have to face my fears and figure out how to work with it. 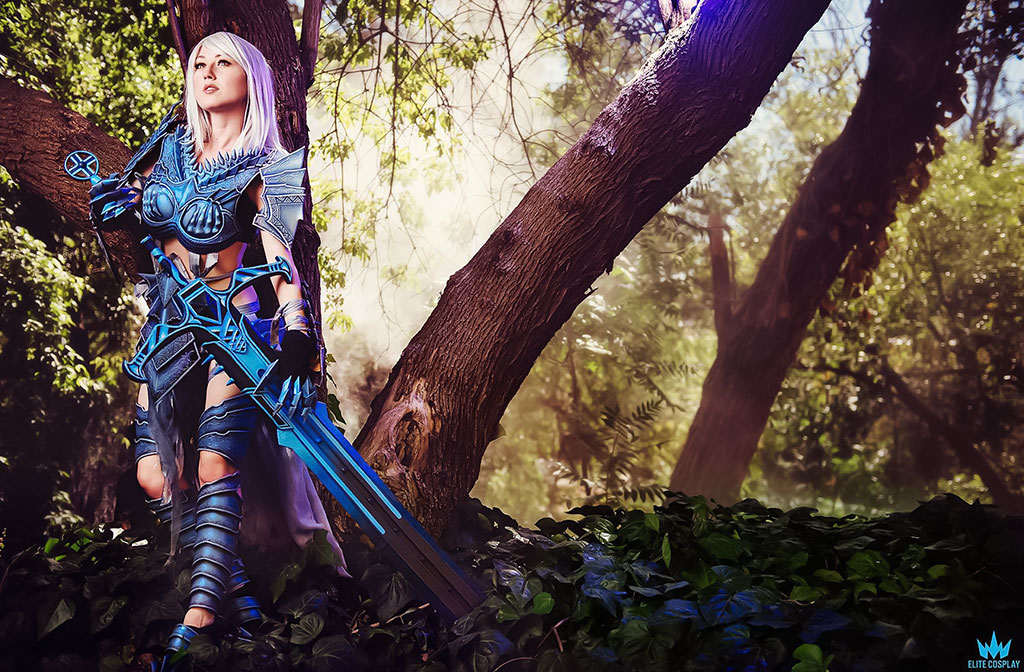 What is the most exotic material you've worked with?

I’ve made quite a few pairs of wings in the past using turkey feathers, which are probably the most unusual material I’ve worked with.  They weren’t too difficult to trim and secure into place, but I could never have anticipated the mess that they left – I was still finding feather fluff around my apartment years later!

I've heard stories that you've made your own fabric for some of your cosplays? Is this true? and if so, what is the process behind that?

I’ve never actually woven or otherwise created my own fabric from scratch, but I’ve done some textile work when I wasn’t able to find a good match for a project.  For example, I’ll stitch together strips of two different fabrics to create stripes or paint on a unique pattern with fabric paint.  When I found a white fabric in a perfect texture but incorrect color for a cosplay, I mixed several dye colors and changed it myself.

What is your most memorable con moment?

I was once wearing a satin ballgown as Princess Peach at a convention, headed for a photoshoot a couple blocks away.  I happened to pass by an entire class of kindergarteners on a field trip, who were ecstatic to see a “real life princess” (many of them even recognized the character!).  I’ve never seen kids so excited over something and it was just the coolest experience.

What has been your favourite convention?

Penny Arcade Expo in Seattle, WA has been my favorite convention year after year.  It boasts some of the most impressive cosplays that I’ve seen, as well as opportunities to chat with the game developers behind my favorite games (and sometimes the costumes that I’m wearing).  I also love the location, with plenty of beautiful backdrops for cosplay photoshoots.

Let's talk setting up the shots. The photos of your cosplay are simply amazing. How do you go about choosing the right place for a photoshoot?

The first thing I’ll look for when location scouting for a photoshoot is matching a scene or location from the source (usually a game).  For example, I’ll try to find something that has the look and feel of a particular cutscene involving my character.  It doesn’t need to be exact, but I’ll obviously try to avoid a background with buildings for a medieval fantasy cosplay.  I try to keep my locations varied, but occasionally I’ll re-shoot in a particularly epic spot (the Palace of Fine Arts in San Francisco, with its multi-story-tall pillars and Greek architecture, is one of my favorites where I’ve shot several costumes).

What's the most abstract question you've ever been asked?

I’ve been asked ‘What does cosplay mean to you?’, which is pretty impossible to answer concisely.  Among (many) other things, cosplay serves as a fun engineering challenge (have to get VERY creative for some of these crazy designs!) as well as a wonderful way to meet others who are fans of the same content.

A member of our community asked me to ask you about creating wings. These almost always go terribly wrong in cosplay, you see really stunning versions and really terrible versions. What's your secret to making amazing wings?

I’ve written up a full tutorial on how I make my wings, which can be found at ‘enayla.tumblr.com/wings’.  In summary, I use PVC pipe as the base skeleton, cover it in batting, and hot-glue feathers into place.  I then incorporate a custom harness into the particular costume for quick attachment.  The most important thing is to use lightweight materials, as wings can become quite heavy after many hours of wear. 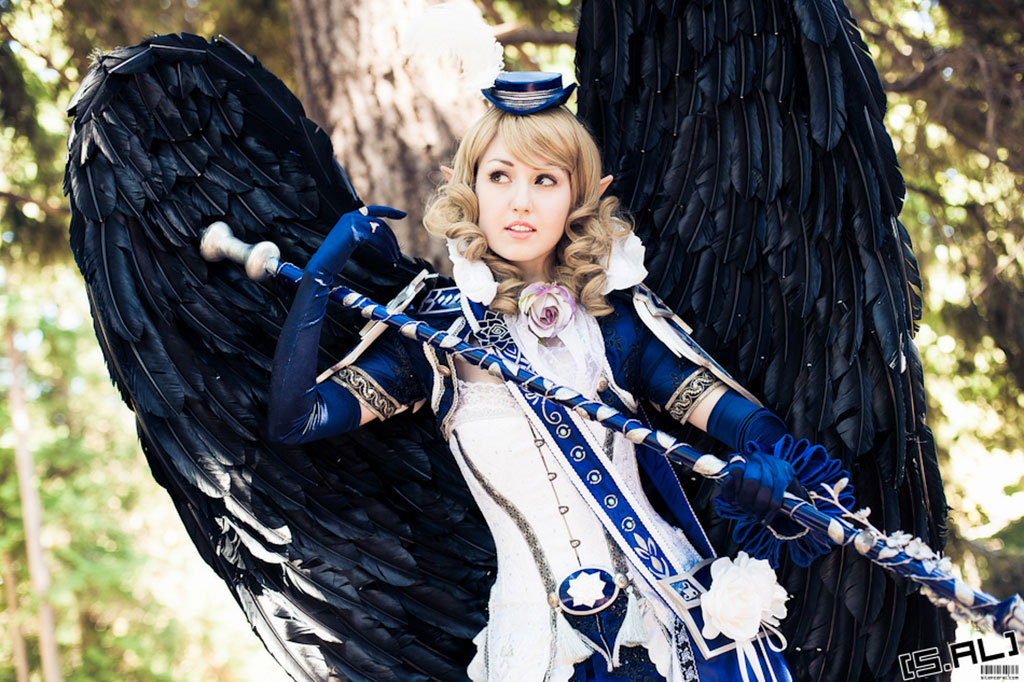 Lastly, do you have any suggestions or words of wisdom for budding cosplayers?

For new cosplayers, the first thing I’d always say is to go for it!  Every part of the process is so much fun, and the community is such a wonderfully inclusive, helpful group of people.  For those just starting out, I'd suggest tackling a simpler project at first and giving yourself plenty of time to finish it.  If you can, try to find a more experienced cosplayer as a mentor; most of us are more than happy to give advice or point you to a helpful tutorial.  If you start feeling overwhelmed, just take a step back and remember that cosplay doesn't need to be taken too seriously: in the end, we're all just nerds dressing up as fictional characters! 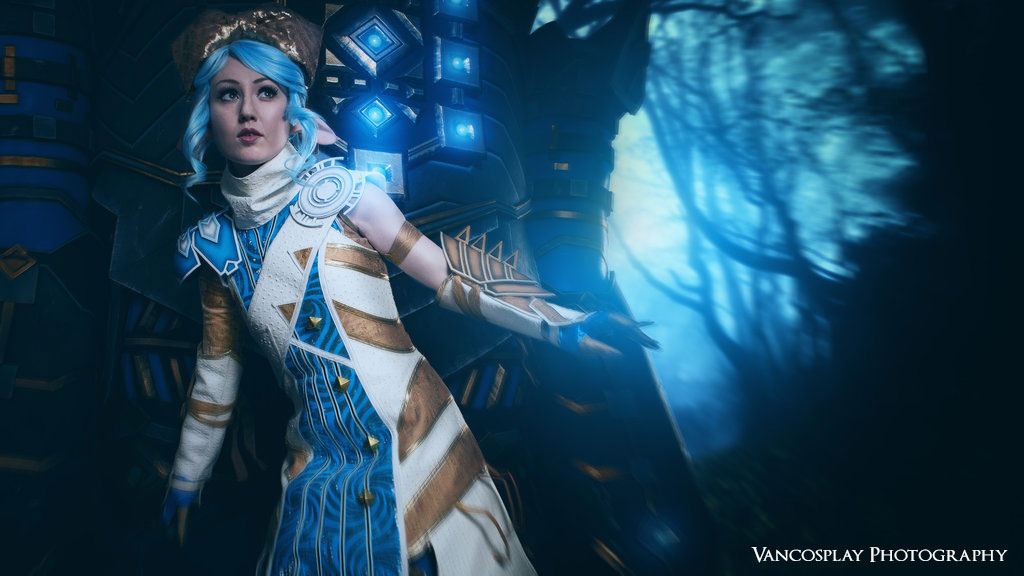