I stood gazing up at Ash Mountain pondering the words of Garyn Indoril. Why did Dunmer like biting off more than they could chew and then act like a bunch of milk drinkers when things didn’t go their way? Worse, I felt like I got sucked into all this because Holgunn went along with Garyn’s brother, or some such relation, when they released Balreth. Sure, it destroyed the Covenant attack with ease, but now it was happily wandering free up on the mountain somewhere. I had to go put the genie back in the bottle because Garyn failed.

Thankfully, on the way to help Garyn, I wound up detoured into a Dunmer burial ground full of tombs, by an Argonian, of all things. He was scared of just about anything that moved, and I honestly can’t remember what he really wanted or why I bothered. More than likely, I helped only to have some fun fighting and destroying skeletons. In the end, I learned how this ancient Dunmer, named Mavos, had banished the brother of strife, Balreth, centuries ago. Even dead Dunmers are too full of themselves, but I managed to learn what I needed to know about Balreth and his prior imprisonment in Ash Mountain.

Fully prepped and armed with the knowledge of how to contain Balreth, I started the journey up the mountain, only to find a group cowering not far from the camp. It seemed the scamps were getting overly frisky on the mountain, and the group could not seem to close the caves. I sighed at finding a Nord leader, Sergeant Jagyr, in such a plight, but figured I would give him the benefit of the doubt until I faced these scamps myself. I highly doubt the Prophet expected me to find so many people needing help when he first told me to go forth from where I awoke after our escape. The thought made me snort as I pulled my greatsword in preparation of my first daedra encounter.

I found two scamps together, and they were no different than the ones I had managed to fight before. The little tricksters love dropping areas of magical fire on me. Needless to say, I got singed trying to dodge them. However, my templar spells and sword proved quite efficient against them. These things weren’t so bad to kill if you rolled out of the fires they made. Even battling two at once seemed like an easy fight for my prowess. Maybe that sergeant needed to grow a backbone. The first two caves closed smoothly.

That’s when I ran into the clannfear. However, I knew how these fought due to dispatching one in Cheesemonger’s Hollow. Mages are all a crazy lot, in my book. These proved no different than the crazy guy’s pet. Okay, I guess I was well blessed in having found ways to prep myself for this adventure in advance. Even better, I did the proverbial ‘kill two birds with one stone’ by destroying scamps and their caves, acquiring their hearts in the process.

Things got a little muddled in the order of events, but I remember reporting to Captain Norra about closing the scamp caves. She seemed to be of solid soldiering stock with a good crew of guards. An Argonian, Walks-in-Ash, helped me to summon the atronachs. In the end, neither was much help to what I had to do on a physical fighting front. 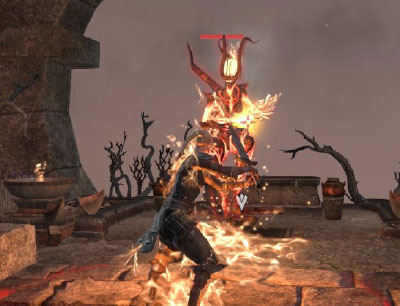 First, I had to summon each atronach, Blaze and Ragebinder, with the daedra hearts I had collected. I’m glad I did not have to summon both at the same time. In the process of summoning them, I had to defeat them. The first one lit me up with fire. I had to quickly throw some heals on myself in the mix of the fight. It felt like my armor would melt into my skin. I’m surprised I got away with my hair. Even with knowing what the first did, I still could not stop being set on fire with the second one. Who needs enemies when you just made allies like these?

Further up the mountain I had to call these atronachs forth again to capture Balreth. Mavos showed up with some sage advice and was actually congenial for a dunmer this time. I went through a portal with some help. At least, I did not have to face Balreth entirely alone. I also had a talisman from Walks-in-Ash that would assist in this fight.

Balreth stood just as big and ugly as when I watched him wipe out the Covenant. Now I had to face him with the assistance of this one mage and a talisman from an Argonian. If Balreth could take out a whole invading crew of Covenant, what were my odds? I probably should have had a few more drinks before jumping through that portal. Alas, here I was. It was time to start this party.

I charged right in first thing casting Dawn’s Wrath, and after closing with him, I realized I could activate the talisman. It stunned him in what looked like a mini rainstorm--a rather refreshing thing in this ash-covered battlefield with pools of hot lava. I found myself running out of magicka rather quickly. I resorted to hacking at him with my greatsword as he started to run for some lava.

Oh, that didn’t seem good at all. I bet he liked lava too much, and in my history lesson from Mavos, I did not remember having to beat up on him like this. Just before he hit the lava, the talisman was able to be activated again. Great, I got to beat on him some more before he finally went for some recovery too far out in the pool for me to deal with. Instead, I had to deal with an annoying scamp before I could get by the mage for some blessed magicka recovery. 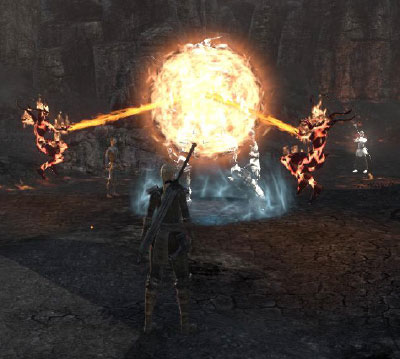 The dance continued with a couple more scamps and two more dips in the lava by Balreth. I barely managed to gain magicka back enough despite the mage’s ability to help me out. I can’t express how glad I was to be able to fight with my sword, as well. I’m not sure how many times Balreth singed me, but at least I was not going up in flames like fighting the atronachs.

Finally, he swayed and fell over with one last bellow of defiance. His spirit appeared, and I was able to bring forth the atronachs to seal him in his prison once more. It was a huge relief to watch them imprison him with beams of fire that enveloped him in a ball of bright light. Fire to fight fire. I had to smirk at how this all turned out.

Once back through the portal, I don’t remember a lot of fanfair. Maybe I zoned it out. It was time to clean up, rest and drink a lot of mead. I had enough fire for one day.