First Look at A Ghost of a Tale 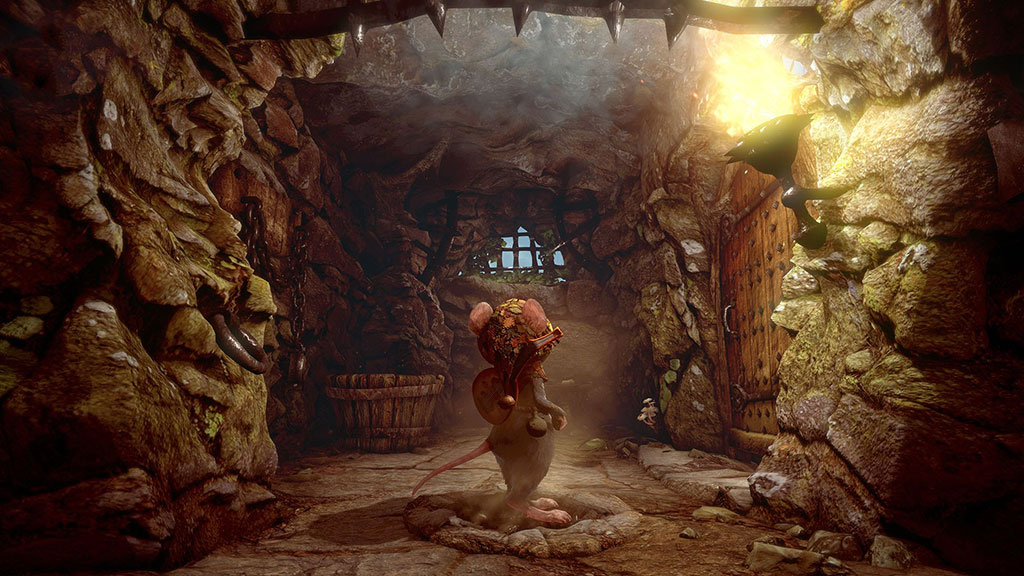 A Ghost of a Tale is a game brought to us by Lionel "Seith" Gallat. Gallat is a veteran with Dreamworks and Universal Studios, and those skills help make an impressive looking game! Funded via an Indiegogo campaign, A Ghost of a Tale is available on several platforms in Alpha.

The game eschews the standard formula of combat. Instead it asks you to play with a mix of smarts, stealth, and swiftness. Where that may not thrill some people, the chance to play such a role will delight others. If you ever wanted to be Bilbo rather than Thorin, this is the sort of game you have been looking for! Actually, you will be a mouse named Tilo, but the idea is similar. 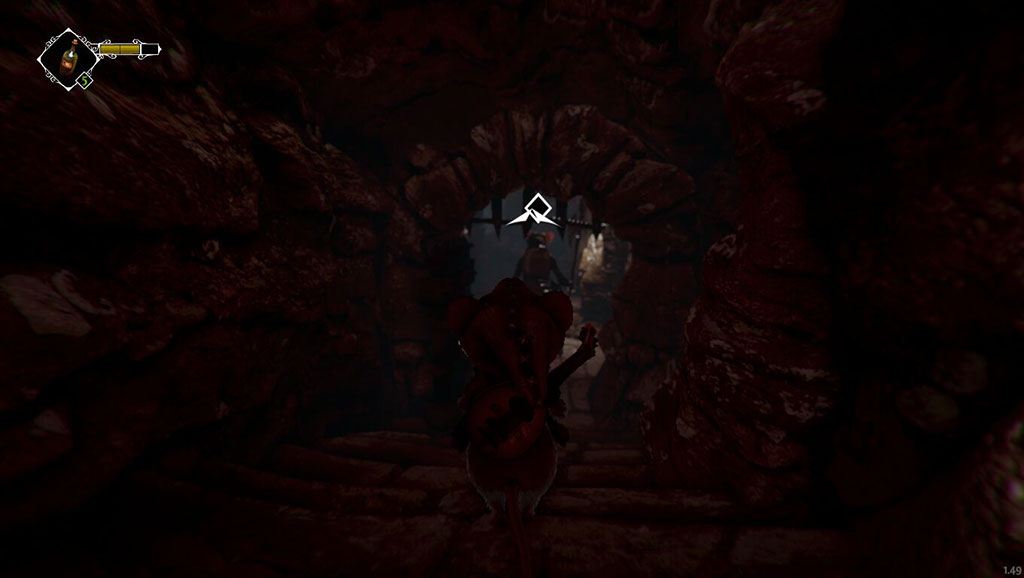 You are a mouse. You are often hunted in a variety of situations. You might not be hunting rabbits, but Elmer Fudd offers you some good advice. The quieter you are, the less likely you will be noticed.

As you roam around you have a variety of choices to make. Those choices include not being so quiet at times. If you want to be quiet, but need to get to where an enemy is standing, you can see about throwing something near them. The noise will inspire them to go looking for whatever made the it. If they see you, however, the distraction was pointless.

You have a variety of tricks though. Even if spotted you can run swiftly. Losing your pursuit around a couple corners, or hiding when they cannot see you, will result in them giving up. Additionally you can don a number of disguises. That is, if you can find all the pieces needed. 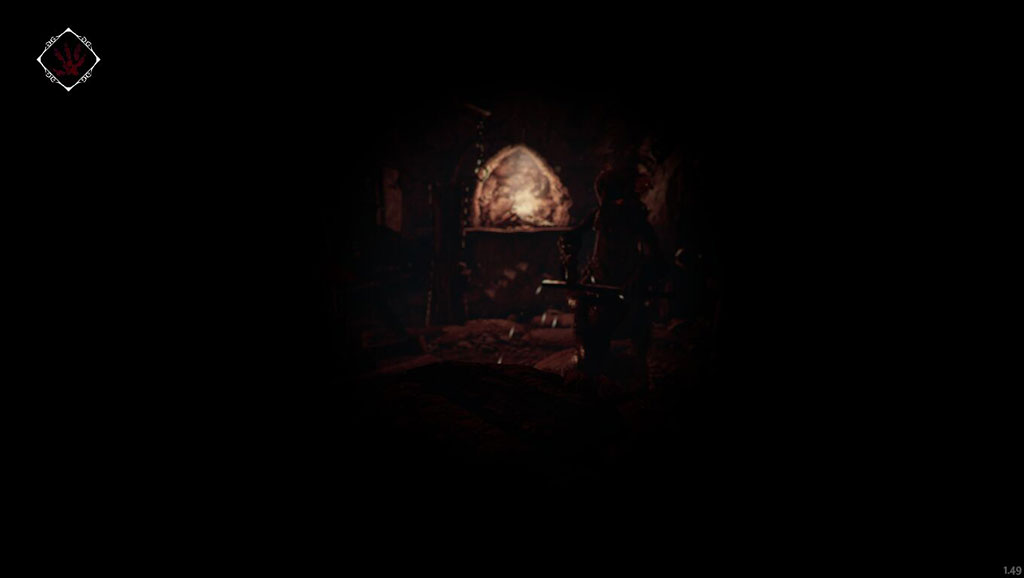 When hiding you will have a limited view. You can see from the picture that a barrel leaves you with a small circle of light. Each hiding spot has a different setup, resulting in a different view. Learning to deal with these view restrictions is important to any prospective mouse!

There is another important aspect to hiding. It is the only time you can save your game manually. There are a few auto-save conditions such as conversations which save outside hiding spots. Using those and those alone to play the game would be a painful challenge, maybe for somebody with far more patience and time to try. 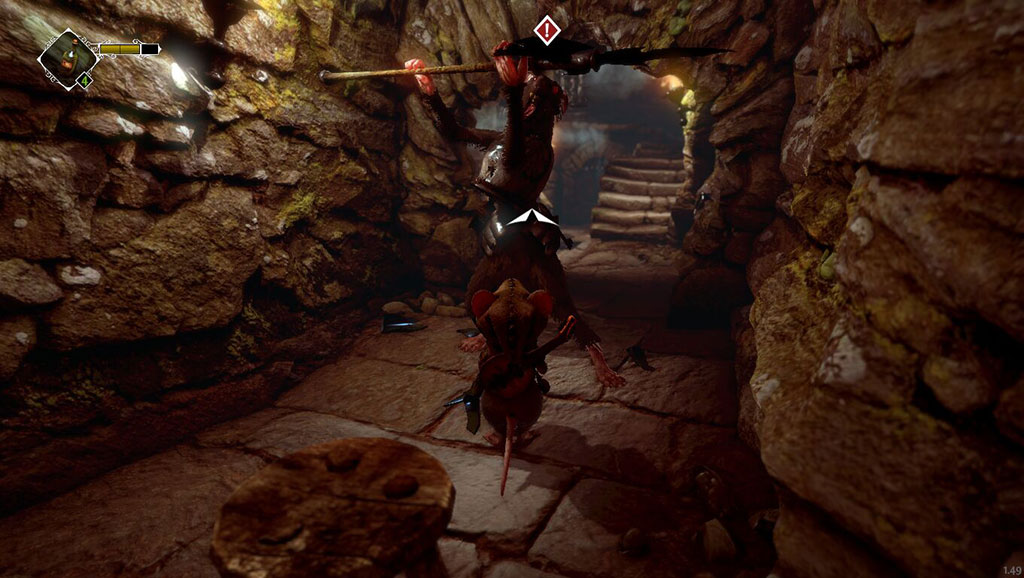 What Happens If a Mouse is Seen?

What, precisely, do you think happens? Granted, there aren’t any women about to chase you with a shoe. However, there does tend to be those on the lookout for shady characters. Unless you dress to impress the locals, some will probably consider you shady.

I already noted that you can find costume pieces in the game. Collecting each full set shows up as a quest. Quests are more or less a means of tracking your progress in A Ghost of a Tale. They don’t always offer tangible rewards. If you want to see what outfits you have discovered there is a nice little book in your inventory. It not only lists some information about each outfit, but offers a quick-change option to equip it!

If you are seen you will be chased. If you are chased you can always try to hide or lose the pursuit. What if that’s a problem? In that case, make wise use of tools and the environment!

Tools offer you a ton of different options for dealing with situations. I mentioned throwing something to make noise earlier. A handy stick or bottle can be used for just that. They might also have other effects in certain situations. You also have other useful tools such as a candleholder that can be used for light or arson. I do suggest not trying arson while standing in a pool of oil in a wooden house. Please don’t burn poor Tilo! 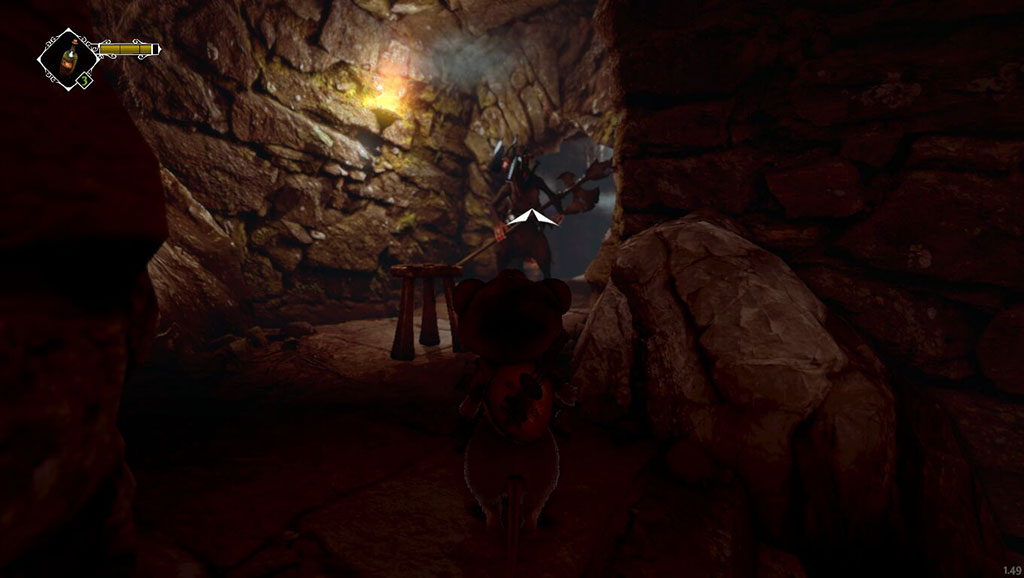 A clever mouse with tools is more than a match for almost any sticky situation. If you are injured from having somebody chase you with a nasty weapon you will need to heal. As is custom, just eat a little and you will be fine! Foods can be gathered around the world, but do not respawn. Be careful! 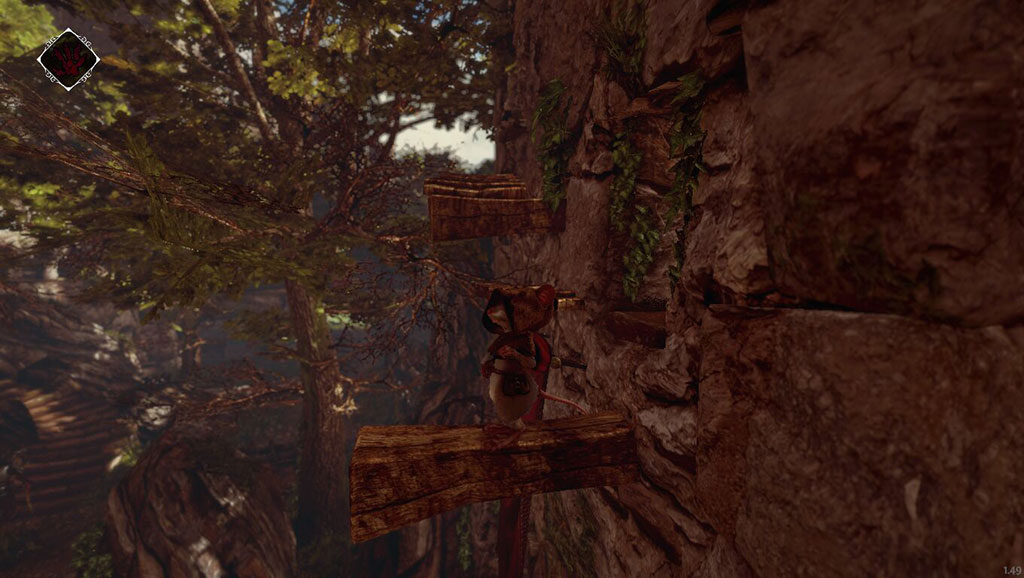 This game encourages you to explore. There is rarely any pressing need to accomplish a given task, and where the story sounds serious you are not on a timer. Additionally you can climb up onto most flat surfaces in true 3D open world style. 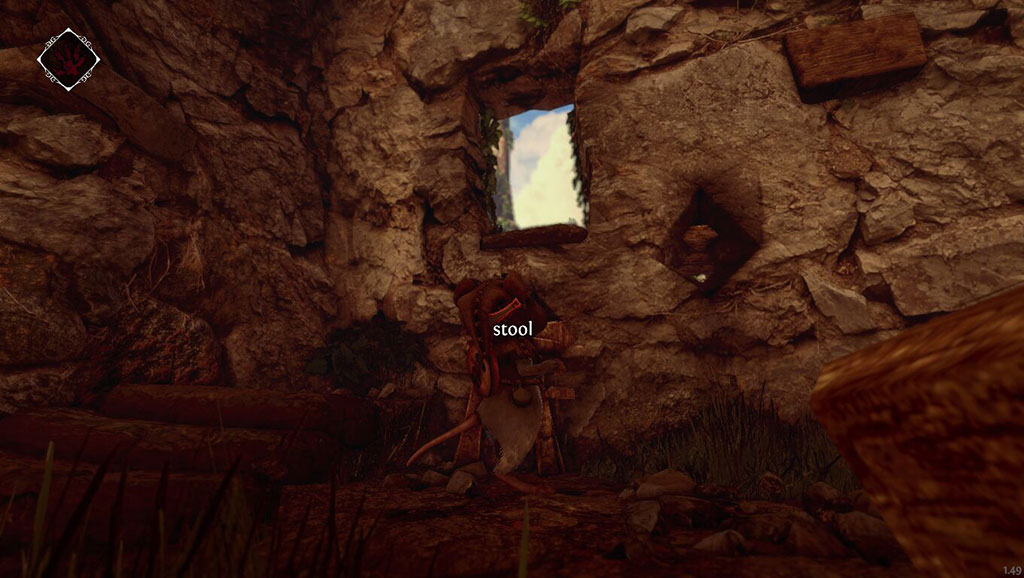 That sounds great, but it isn’t quite perfected yet. One of my few complaints was how clunky the climbing interface can feel. It is easy to push some of the climbing objects rather than just climb them. Sometimes the location requirements make jumping an exercise in frustration. A few bugs left in the current early version can make this even worse as objects can vanish until the entire game is shut down and restarted. I left feedback and hope for improvement. Maybe even seeing a suggestion I left implemented. It is alpha, these things are to be expected. I didn’t find as many as I expected to be honest. 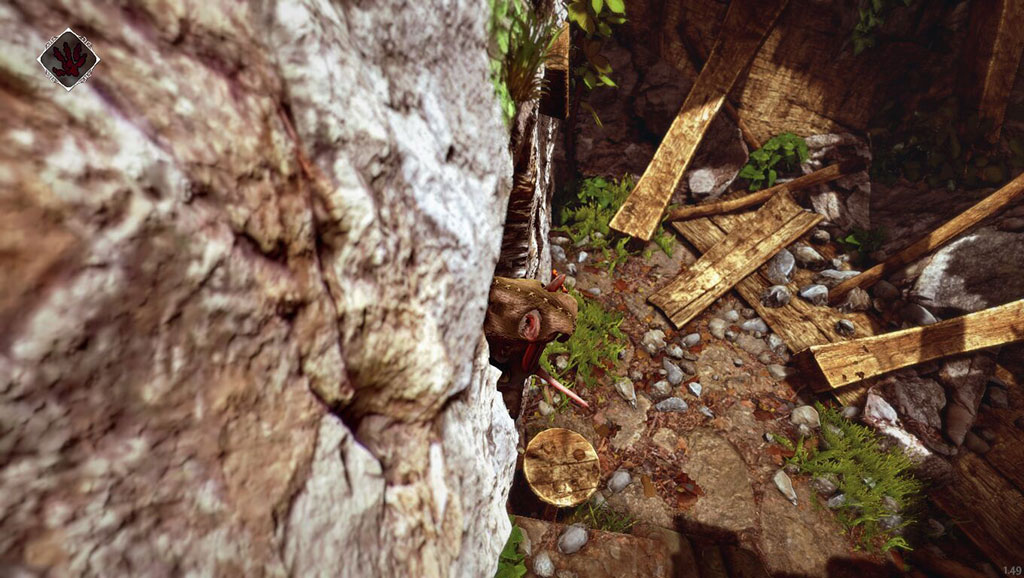 I also had a lot of fun with climbing. Despite some frustrations most of my experiences were positive. It felt like I was really able to go exploring without getting myself into trouble. The only time I had issues with the world was my own impatience as I ran into an unloaded area. That is a sure recipe in most games to go falling through the world. Which is the case here, as well and I took a merry trip into the skybox!

A Ghost of a Tale offers reasons to explore, and fits well into the stealth category without being too punishing for any single failure. As work continues this title should become a shining example of making a fun casual game which still offers enticing gameplay. I have very much enjoyed my time so far! I heartily recommend A Ghost of a Tale to anyone who is looking for a slightly different game focused on exploration, story, and puzzles! 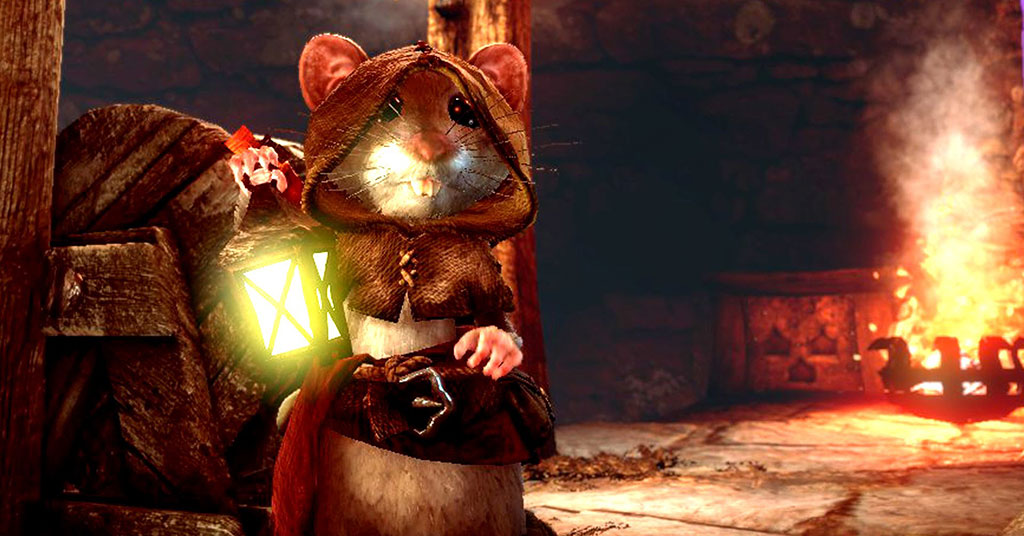