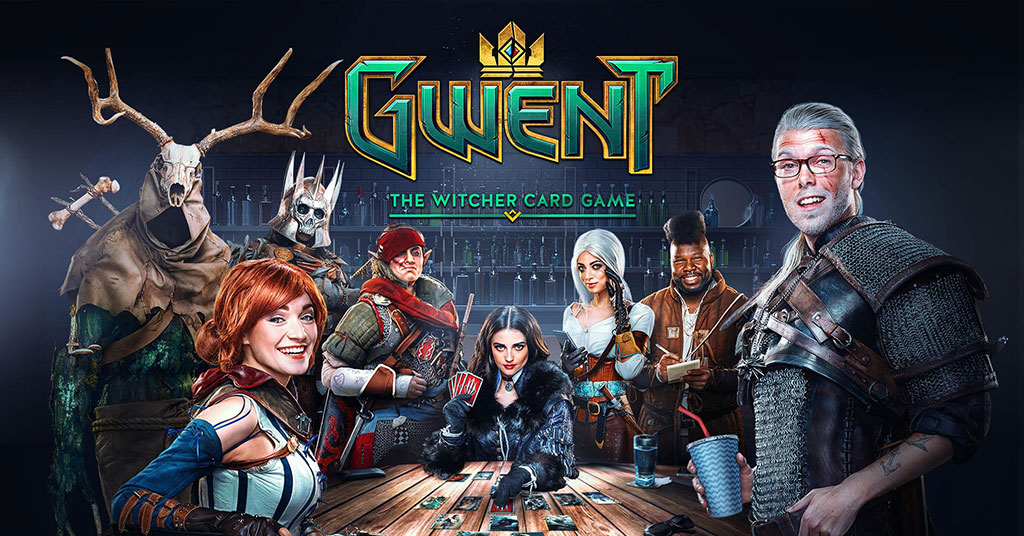 Hands on with the newest Witcher game

Ever since Blizzard first invited us all to gather round the Hearthstone and play a few rounds, virtual card games have been a common sight. The idea of applying cutting edge hardware to flipping a bit of paper no longer seems ludicrous, and the Collectible Card Game market doesn’t show any signs of folding soon. Recently I took some time to look at Gwent, the latest player to come to the table, and find out if CD Projekt Red have produced a winning hand at Gamescom 2016.

Gwent started life in the wider Witcher universe and was originally the brainchild of two designers at CD Projekt Red. This mini game eventually squirrelled its way into The Witcher 3, quickly becoming a phenomenon in its own right. Shortly after it appeared, players could be found travelling from tavern to tavern hunting NPCs, collecting cards, and battling patrons with their best Gwent decks. Hundreds of emails also followed, flooding CD Projekt Red with demands to turn Gwent into a standalone game. 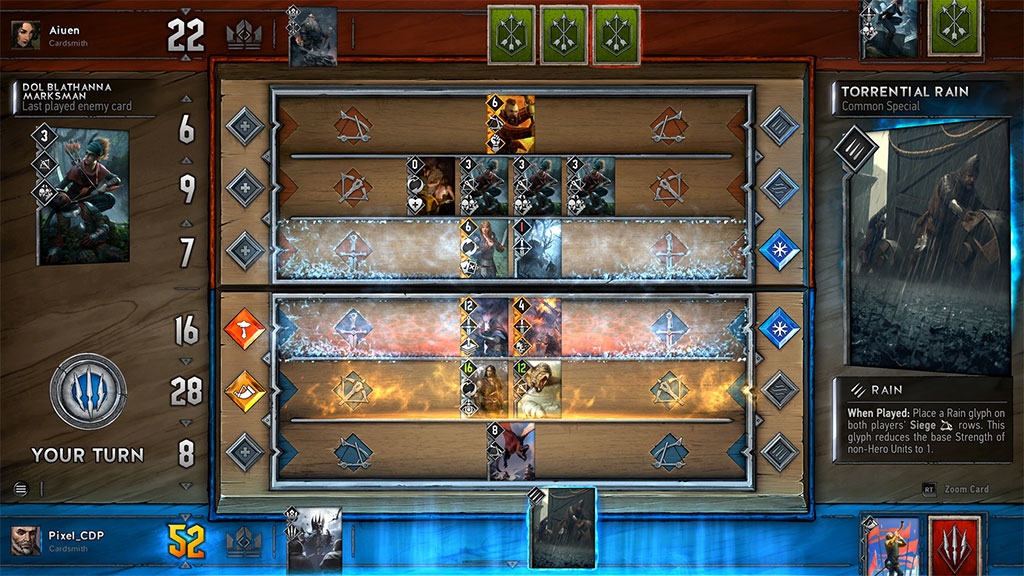 In turn, Gwent is now a free to play title, due out soon on Xbox One, PS4, and PC. This standalone iteration of Gwent is fundamentally faithful to the original. Games are still played as best of three scenarios, with a variety of cards played in melee, ranged, or siege positions. Each card has a combat value, and the highest score at the end of each round wins. Hands are drawn just once and continue to be persistent across an entire game. This does not, however, mean that Gwent is a direct duplicate of its predecessor.

Vast visual improvements can be found across the board. The playing surface, UI, and card decks have all dispensed with functional simplicity and replaced it with rich tones, animations, and high resolution artwork. Premium cards are gorgeously rendered and make other games look positively flat in comparison. I talked to Brad Auty, animator at CD Projekt Red, about these changes.

CD Projekt Red has done far more than just given Gwent a lick of paint and a polished game board. Numerous cards are voice acted and even react to events during the match. When sent off to die, the less fortunate cannon fodder can be found complaining and cursing, while others might highlight problems such as fog and frost.

This exceptional voice acting is also put to use in Gwent’s single player campaign. Not content with an already popular competitive mode, CD Projekt Red is expanding the Witcher universe even further with an open world RPG adventure. However, this is not a simple regurgitation of previous Witcher games. Looking more like a point and click adventure than Witcher 3, the story features both old and new characters from the Witcher. As players traverse the land, they can build their adventure by making meaningful choices. CD Projekt Red is very clear that player choice matters during Gwent’s story campaign and there will be a number of diverging quest lines and consequences based on player actions. This cumulates in over ten hours of content, interspersed with action on the Gwent board. 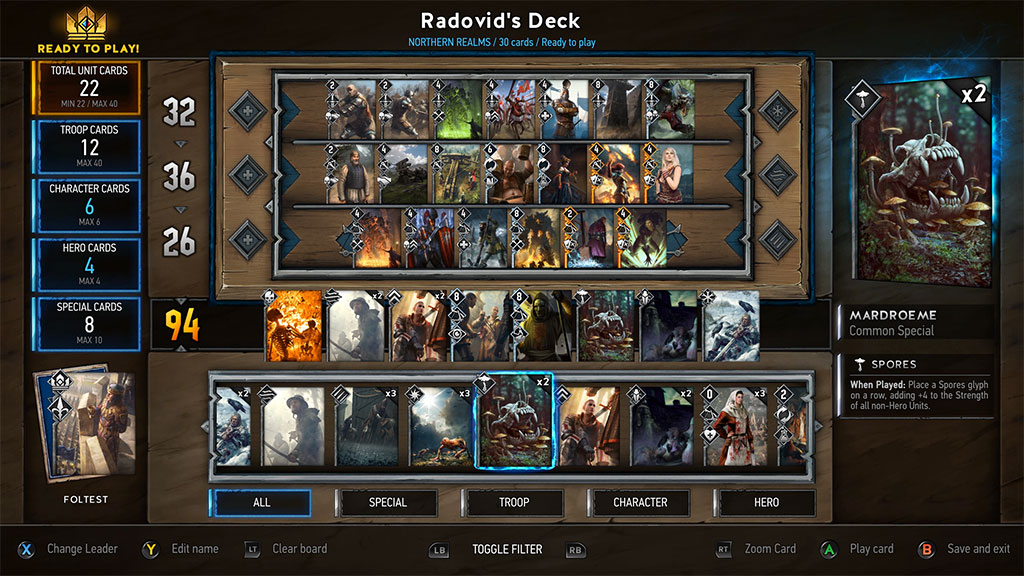 Playing a hand on the Gwent board is not all about strength. Cunning and strategy are just as important, making it stand out amongst its peers. Numerous bonuses, from resurrection to weather conditions, can sway the tide of battle and benefit particular races. Monsters synergize well with frost and fog while the remaining three races, the Northern Realms, the Skellige, and the Scoia’tael, all have their own particular set of traits that encourage a range of alternative tactics. In Gwent, playing to win does not always mean taking the most obvious approach. Cards which are discarded at the end of a round may be more useful in a later battle, or bonuses may be more important than raw power. I even found myself deliberately losing rounds and bluffing opponents into using their strongest cards. 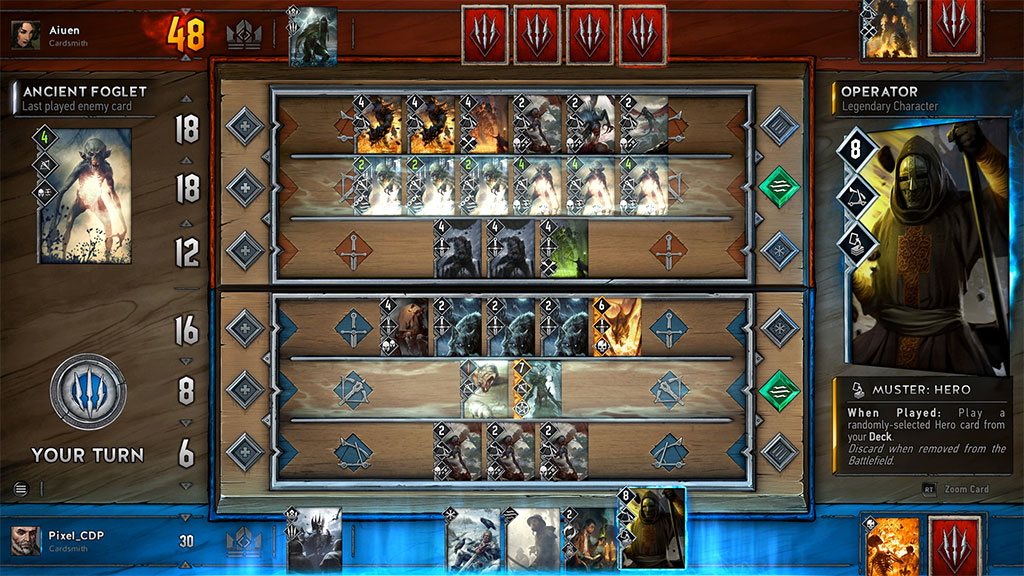 CD Projekt Red has taken a proven concept and refined it, creating an outstanding experience that stands out amongst the competition. Gwent is everything you would expect from the team that brought us The Witcher series, and with beta due on October 25, there is not long to wait on this adventure.