Get Wrecked in Warface 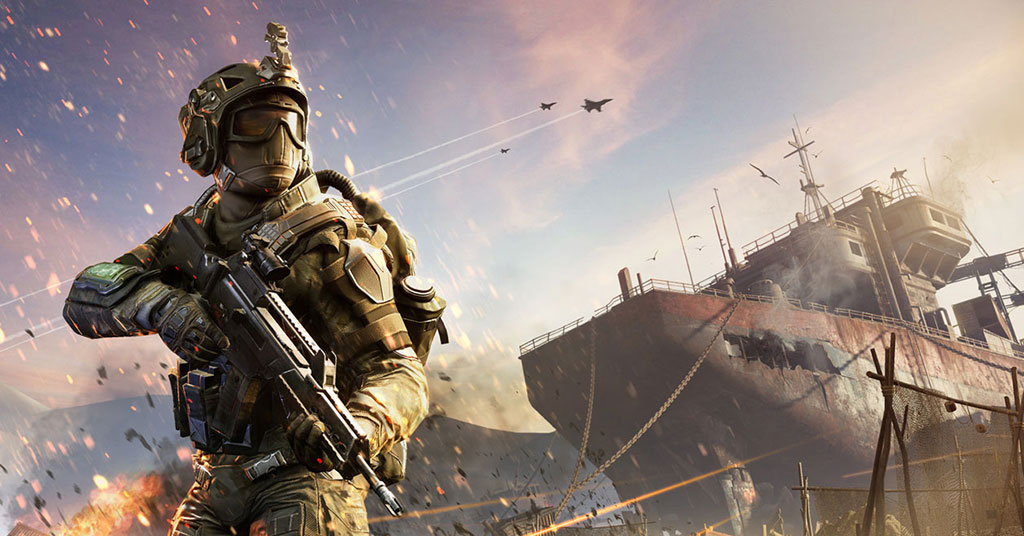 What seems like ages ago, I was first introduced to Crytek and Free Radical Design's Warface at the 2012 PAX Prime. It was described as a free-2-play cooperative shooter. What sold me on the game was the video clips of the soldier sliding under a truck and blasting a shielded soldier with a shotgun launching him into the air.

It was something I had never seen in a game before and it spoke my language. Over the past few years that little promo video has given way to one heck of a title for those who love the cooperative FPS. 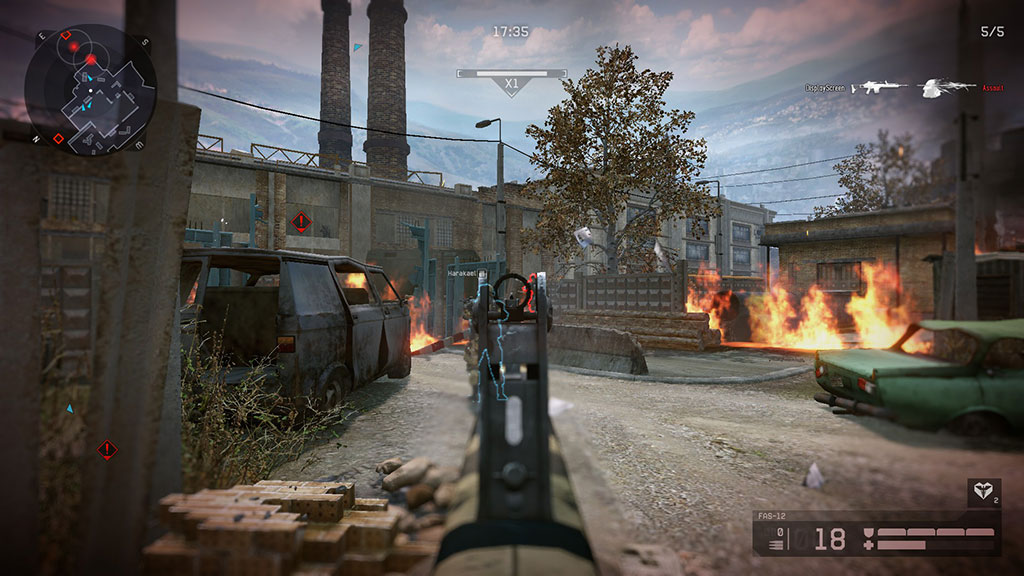 The base gameplay consists of 5 player teams, where players choose from one of four classes. They can engage in one of four gameplay modes. Each gameplay mode has it's own set of achievements and rewards for completion. Players can form clans to make grouping up for missions a breeze. Additionally, they can climb the clan ladder and become a dominant force on the battlefield.

Warface has been constantly evolved releasing new content, skins, and challenges. With gameplay combining traditional FPS style gameplay with a Parkour style movement system that lets you sprint, slide, climb, and hurdle your way across the battlefield.

Your loadout consists of a primary weapon, secondary weapon (pistol), grenade, and class equipment like a medpack, ammo kit, or armor kit. Additionally you have multiple auxiliary slots where you can place special grenades, like flashbangs, claymores, or smoke bombs, that you can acquire through daily rewards and through the cash shop.

The core of this game is the synergy of the class system. Split into 4 classes, Rifleman, Medic, Engineer, and Sniper. Each player can choose a role at the beginning of the match which determines their loadout and abilities. Now unlike some other FPS games that have played with this idea, Warface puts emphasis on it.

This class is essential on any mission. They carry large machine guns, assault rifles, and most importantly extra ammo for the squad. Without one of these in your party, your team will run out of ammo and be forced to take down those snipers, heavy gunners, and shielded jackwagons of death with only a knife. Assault is the only class that can provide team members with additional ammo and thus a team is bound to fail without one.

My personal favorite, this class carries a medpack and defibrillator that can heal and resurrect a fallen member within a given allotment of time. The defibrillator is also handy for getting the Dr. Doom achievement by using it on enemies to shock them to death. This is a very good way to dispatch those pesky Heavy Gunners. Funny. Being 90% covered in metal doesn't hold up to well to an electrical current.

To compliment your infinite healing ability and static personality, you will find the shotgun as a reliable friend who can send people flying. Literally! They fly! Medic is perfect for the player that likes to get up close and personal with your enemy. I like to think of it as an assassin! I can take my axe to your face and then go heal myself and my team then charge back in knifes blazing. It's a very satisfying experience. 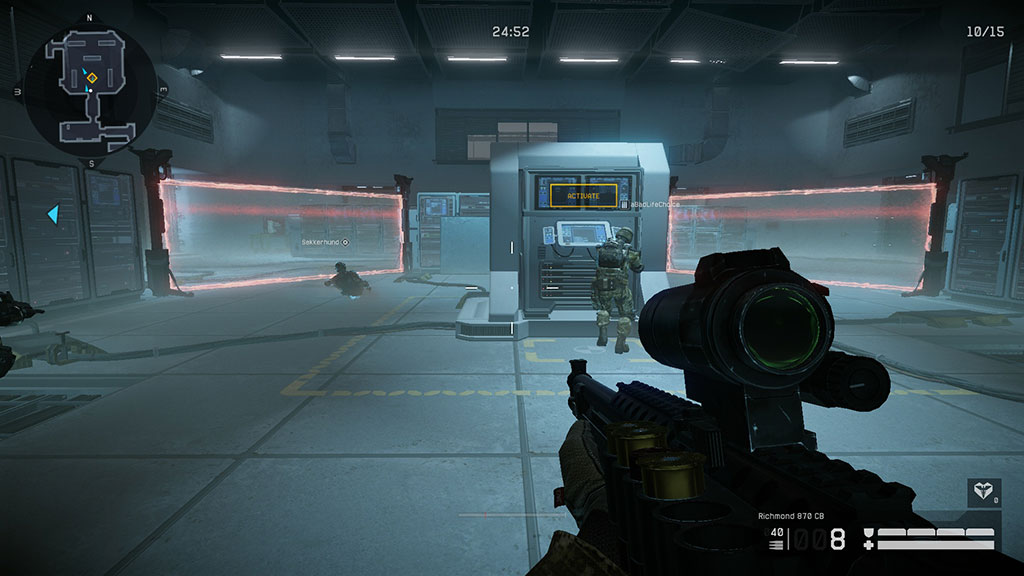 Engineers have the unique ability to restore player's armor. Armor is like a second health bar. This allows players to take a few more hits before they start bleeding out. Additionally they come equipped with claymores which provide a much needed asset on the battlefield when opening doors to a whole lot of angry shield wielding blackwater soldiers.

This class has a rough start in the game. When I first picked Warface up, I tried out the sniper class and found more often than not I was the first to die and the last to get a kill. The beginner armor is just not very protective and the gameplay is so fast that you rarely get to get a shot off before someone else kills them.

However, after you get out of the "newbie" mission, things get different. Through the hard, insane, and special operations missions, you're going to be real thankful you brought a sniper along. About the time rockets start flying at you and your team you will realize the importance of being able to take something down at a long range.

These basic missions are about 15 minute battles that place you on one of 6 daily battlefields. Every day the missions rotate so you often times will find new missions you haven't tried yet. Even now, I'm still finding missions I've never played 2 years after I began playing.

Missions are classified as Easy, Medium, Hard, or Insane. Each type typically consists of a certain type of soldier class you'll be fighting and how many "boss" soldiers you'll be facing. Your missions can pit you against heavy soldiers that can only be hurt by shooting the glowing exhaust on their back, assault helicopters, sentry turrets, and even giant mechs.

The special operations missions award greater exp, cash, and vp rewards for completion but also are much more challenging. These are considered raid content and consist of compiling multiple stages of a plotline. Each one of these raids can be completed in normal, hard, or insane modes but you are limited to 10 attempts per day. These missions can last anywhere from 30 minutes to an hour. From personal experience I can tell you their insanely fun but bloody hard. Having a good group dynamic is essential. No one man can complete these on their own. It is a pure example of where team play is required. 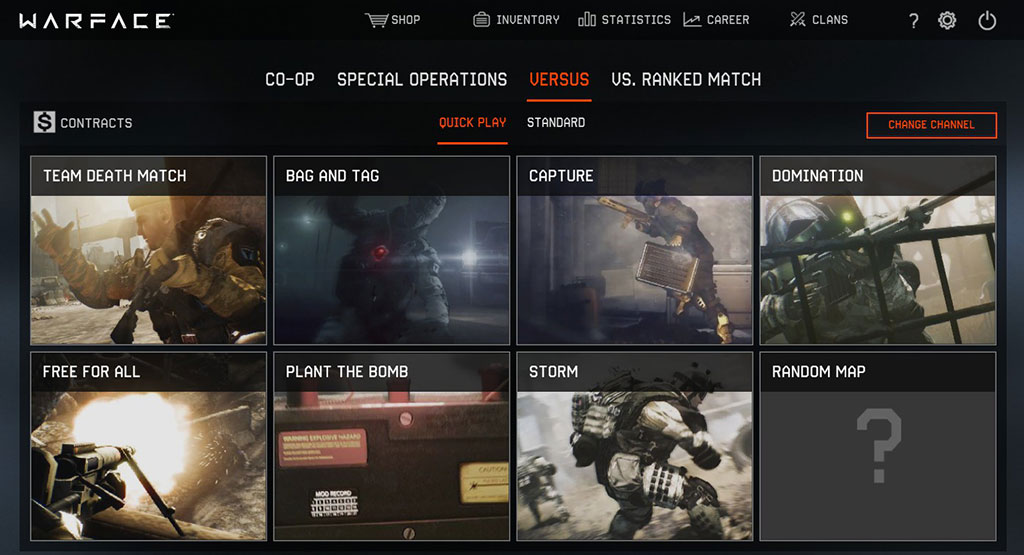 In this mode you're pitted 15v15 against other players in one of 8 gameplay modes. These are, for the most part, traditional gameplay modes most players will be familiar with if they've ever played a Call of Duty or Counter Strike game. 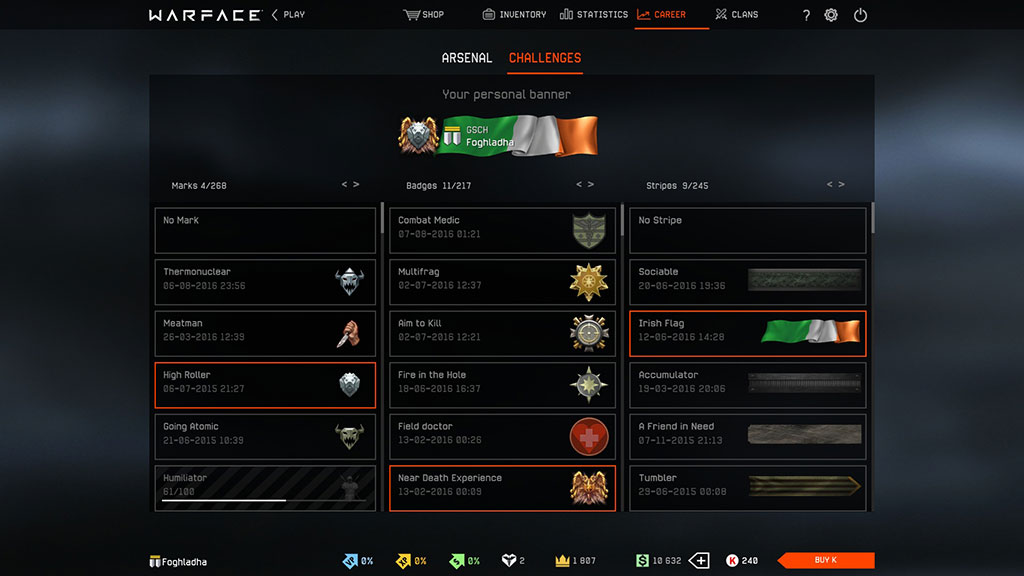 Progression in Warface is broken into 3 key mechanics.

Earning ranks allow you to purchase or earn better armor and equipment. The higher you rank the better the armor you can equip and the more missions are available to you.

Additionally you can chose one of three progression paths before each match to unlock new guns, armor and attachments. By filling the exp bar for each you will be able to unlock better gear.

Lastly there are a wealth of Challenges you can earn by performing certain feats. These Challenges will let you stylize your nameplate with Marks, Badges, and Stripes.

On of the many ways players can earn some extra cash to buy new gear is by listing rare weapons they receive out of reward chests on the Auction. Players can bid using Kredits, a cash shop currency you can purchase or earn by selling rate guns on the auction. Many of the weapons found on the auction are very rare or were only available for a limited time.

Hit the front line in Warface – a free-to-play first person shooter that offers new multiplayer missions every day. In Co-op mode, play the part of a Rifleman, Sniper, Engineer or Medic, and master the unique skills of each class to help your team to victory. Daily new missions mean you'll always have a fresh challenge to face and new rewards to unlock – regardless of whether you tackle Regular, Skilled or Hardcore campaigns. Versus matches see teams of up to eight players battling it out in stacks of competitive modes. Jump into "Team Deathmatch", "Free for All", "Plant the Bomb", "Storm", "Destruction" or "Capture", and switch your soldier class at any moment to maximize your contribution to the cause.