February proved to be an interesting month for several reasons. First, a lot of discussion occurred about the new World vs. World (WvW) mount. Then we got the bombshell of ArenaNet becoming another gaming company with a layoff. The discussions about what this meant for Guild Wars 2 ran both hot and cold wherever it was discussed. I checked out some different news sources and posts from ArenaNet to get a handle on the truth of it all.

ArenaNet, as part of a restructuring with NCSoft West, laid off 143 of its employees. At first we had no information on the number, but a proper filing of the layoff has confirmed the number. Per the Seattle Times and other sources the company is also supplying help for those laid off with severance packages and job searching in the area. A much better deal than some of the things I saw or experienced first hand during my time in the IT industry.

For those remaining in the ArenaNet family, there will be a lot of adjusting because people will be missed and others will be moving back into the Guild Wars 2 development team from other projects. On a positive note, despite the amount laid off and all of the changes, the company is still well stocked with a team to maintain Guild Wars 2.

Per updates by Mike Zadorojny, many of the things planned are still in the works, but there will be some delays, such as one week for the Warclaw mount, as they get the team coordinated and determine a realistic schedule. The World Restructuring and Living Season stories will continue. It appears the game will be maintained and updated to keep those who love the game finding new things to enjoy and conquer. Events for PvP and WvW will happen, and the Super Adventure Box will make its annual return.

In the mix of it all, the fans showed great support across social media and with an event, #Love4ArenaNet, in Lions Arch on February 28th. The primary organizer was BluJasmine and I talked with Iamsyon for the event details. They did an EU and NA time and went for a third time, due to enough people wanting in, but missing the other times. The event included an RP walk around LA, with different stops on each event. Some of the stops were Gale’s Frog Pond, the GW2 logo on the ground and the Lighthouse. Then they formed up to make various shapes, which can be seen in the pictures provided by BluJasmine. 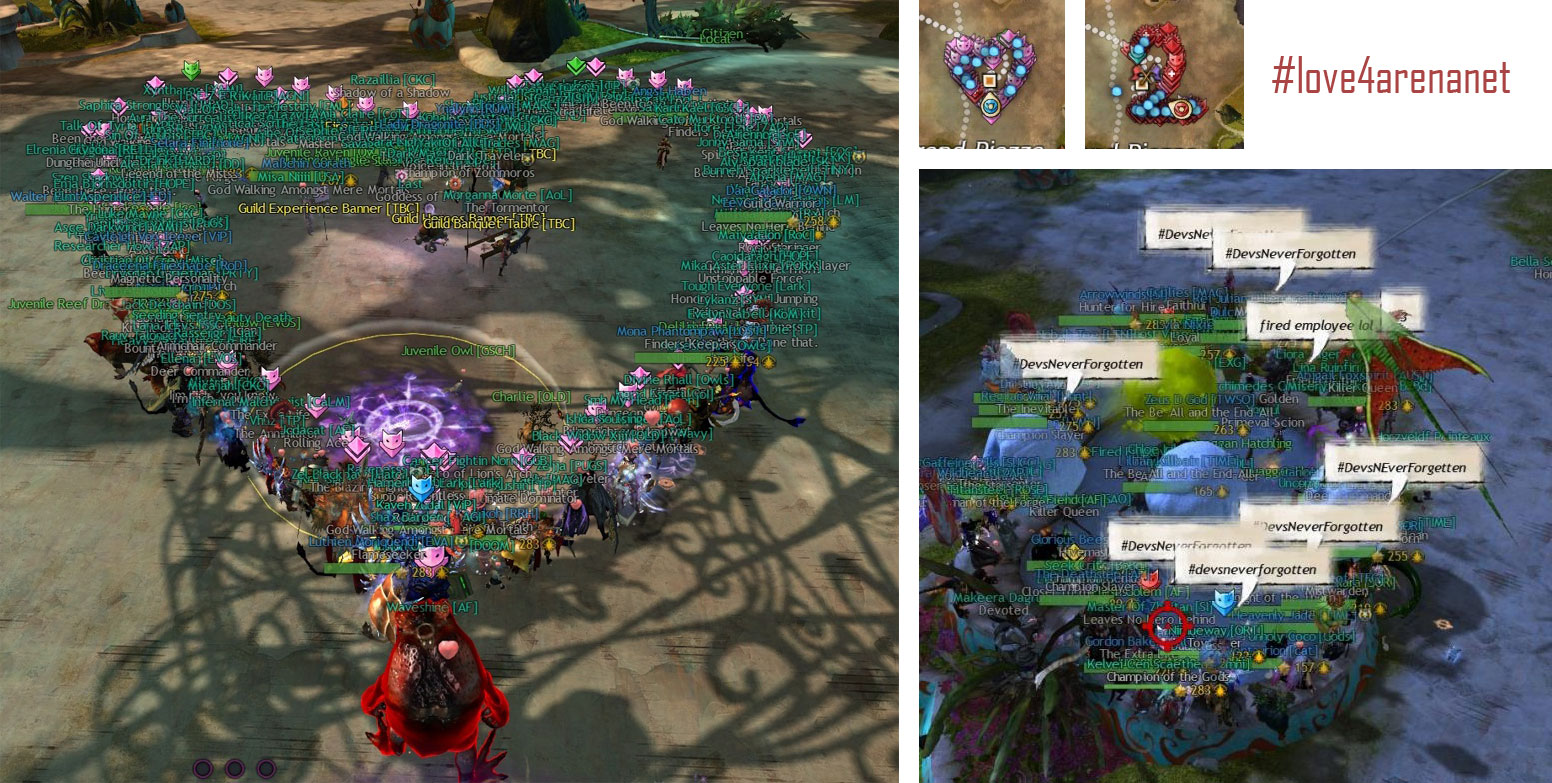 I know some of the Gaiscioch crew got to go and were trying to help those that could make the time, know how to get grouped up with a squad and try to be in the same instance. I heard that it went very well and the community enjoyed itself, even as it mourned the loss of some of its favorite people at ArenaNet. This game has a strong community that felt more like family and despite some of the debates that could be had over how to do things, it’s one of the most helpful communities to new and old players alike.

I’m looking forward to seeing what comes next in the story and what new lands we will get to explore. We can’t be left with that doozy of an ending from the latest release, which I would love to play more for achievements, but can’t bring myself to go through that yet again without knowing a path forward. The great thing is some of this future stuff has already been put into motion before the layoff was announced.

Guild Wars 2 is indeed an aging game but many people, like myself, keep returning and some have called it home from the beginning. It is still the largest chapter game of Gaiscioch with a decent influx of new and returning people. We still have events almost daily, just completed our latest Great Tyrian Adventure event for the community, and there are plenty of spontaneous events to work on story, map clears, dungeons, etc. Gaiscioch will have a healthy community here and continue its events to pull the community into large scale fun for some time to come. We will miss the devs we have made friends with, but we look forward to seeing what adventures they have in new jobs. Some of them are sure to be part of teams that will bring players new adventures in games we can’t even imagine yet.

To those who have not tried this game, I encourage you to do so. It is full of many different things to appeal to one of the broadest range of gaming types I have seen over the years. Sure it isn’t for everyone, but it has a lot to offer that can make the casual to the elitist happy. And we can’t forget there is a reason we also jokingly call it Fashion Wars, which appeals to most of the people I know for making our characters uniquely ours.

I look forward to seeing you in Guild Wars 2 as we continue to support and enjoy the game we love. Here’s to many more stories of adventure in the world of Tyria.