Guild Wars 2 Living World: A Star To Guide Us Hands On 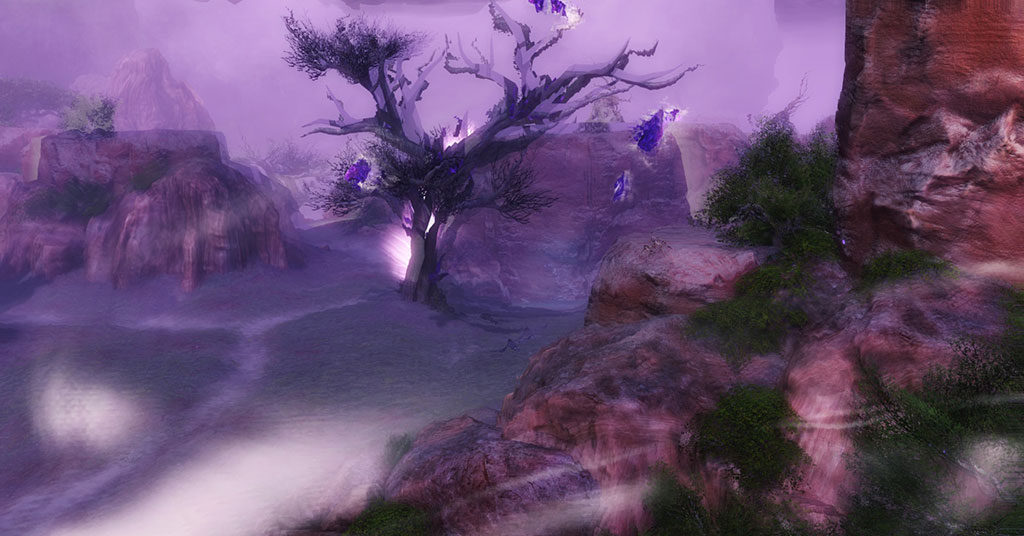 It seems somewhat impressive that the citizens of Tyria have managed to stave off devastation from so many avenues and for quite so long. After felling two dragons, cutting down Scarlet, bringing down a god, and facing off against Palawa Joko, things take a turn for the worse as we learn that our actions have far-reaching consequences and the looming branded Storm finally descends upon Tyria.

A Star to Guide Us is the fourth episode of the current Living World season and arrives roughly three months after the commander faced off against Palawa Joko. While we emerged victorious from that battle, this is not the end of the Commander’s woes. A power vacuum exists where Joko once stood. The Awakened are split, old alliances are in turmoil and the Sunspears are still far from reformed. While we’ve been accustomed to dealing with political infighting during the rise of the White Mantle, a message from Taimi opens up a particularly unique set of problems.

Without leading too far into new territory, the events of A Star to Guide Us quickly escalate from a slow burn political problem; culminating in a new map; some troubling distortions in the mists; a major resolution for certain characters; the return of some unexpected faces; and a perilously bad plan that involves an incredibly powerful magical relic and a hungry Elder Dragon. To fit a story of this magnitude into a single episode takes some effort and things rattle along at quite the pace once they get going. However, as always, it’s the personal interactions that really make the Living World memorable. The interactions between two particular characters changed the way I felt about one of the game’s less likable heroes while a long-running story arc brought a fitting sense of closure that was dearly needed. It also must be noted that the continued use of in-game cutscenes is particularly effective, creating a believable sense of dread in the midsections of the story.

Much of A Star to Guide Us plays out on Tyria’s newest map, Jahai Bluffs, and is a clear demonstration of Kralkatorrik’s impact on the world. Jahai Bluffs is distinctly dangerous territory for anybody ill-advised enough to wander out into it unprepared and is an entirely different experience to the Dabiji Hollows and Allied Encampment of Kourna. Gone are the long clear roads and relatively empty sand dunes that stretch off into the night. Instead, the Bluffs is more typical of the rest of Koruna, containing a mix of scrubland, winding desert valleys, and sheer cliff faces. Where idyllic sands might have once sat in this new stretch of land,  Kralkatorrik’s branded carve a great purple scar into the landscape. That being said, do not expect this to harken back to the unyielding difficulty level from Heart of Thorns. Instead, this feels a little like Bloodstone Fen, with constant assaults from all angles. While the Branded circle the map and the local wildlife are far from friendly, players can still chase a number of map events. Most of these seem to revolve around the current tensions that exist between the remaining forces in this region of the world. However, there is one other problem to contend with when you step out into Jahai Bluffs.

As if the twisted landscape is not enough to contend with, Kralkatorrik’s influence weighs heavy on the weather as well. ArenaNet has slowly pushed their weather tech throughout the last few episodes, from the first rumblings of the Brandstorm to its recent introduction into champion encounters. Now, anybody out for a stroll In the Jahai Bluffs will find a gargantuan tornado tearing across the horizon. Anybody unfortunate enough to step into the eye of this monstrosity is unceremoniously launched into the upper echelons of the map. This isn’t just a cool way to get some air, however. It is, just like the Roller Beetle in episode three, a way of providing extra value to the various systems that ArenaNet already has in the game. The new season side currency, volatile magic, litters high altitudes and players who have already invested in gliding masteries or griffon training will instantly feel the benefit of this. 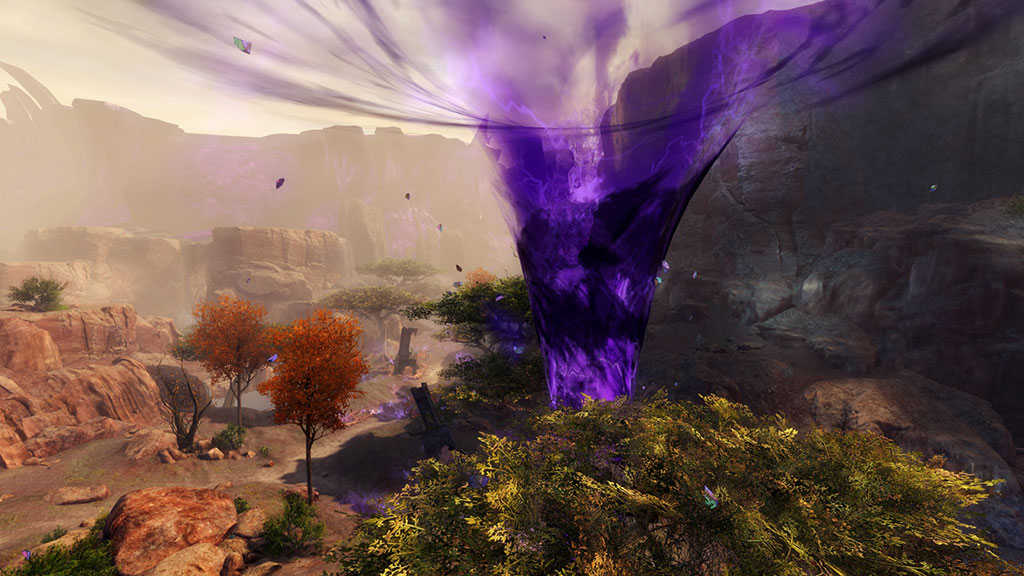 Anybody invested in the latest progression lines during season four will probably already have access to Bond of Life. The newest addition to this is a mastery line which adds a similar skill to mounts, called Bond of Vigor. As you might suspect this has an active effect on Vigor regeneration. Vigor limits the use of each mount's unique movement skill. Jackals can only teleport so often, Griffons have a restricted flight time, and the epic roller beetle takes some time before they can boost. Activating Bond of Vigor impacts each mount in a particular manner, but manages to enhance each animal’s vigor regeneration. It might mean that the Roller Beetle gets an instant pool of vigor, the Jackal might find that extra jumps are available. While Bond of Life allowed players to plow through enemies, Bond of Vigor provides useful flexibility to the mount system that will extend beyond Jahai Bluffs.

With everything, including the weather, going against the Commander, A Star to Guide Us returns players to territory that might be a little familiar to anybody with memories of the Nightfall campaign. Originally part of the Command Post, Sun’s Refuge now exists as an abandoned shell buried beneath a mountain of branded crystals that crawl across Jahai Bluff. Constructed around a massive brazier, the chamber of the sun reaches out into this cavernous space and protects those inside using a powerful magic spell. As players discover this area for the first time, it is up to them to bring life back to the area. This begins by clearing out an arachnid infestation that marks one of my personal highlights of the latest update. While there are more interesting encounters, the unexpected reaction of certain characters and writing around this incident make it stick with you.

Sun’s Refuge is described as a personal instance and is more like a home instance than player housing. This forgotten sanctuary stands as a moment of respite to players and NPCs while the world outside is in turmoil. It is up to the Commander to ferry in terrified refugees, attract Sunspear recruits, and support research into local activities. Interacting with clearly marked NPCs in Sun’s Refuge unlocks the prerequisite collections for these extra additions, and much like your first cat collection, completing the required tasks out in Jahai Bluffs fills this home away from home with a range of surprising visitors. It, however, takes more than feline friends and decorations to make Sun’s Refuge. This area is littered with lore, nods to both Guild Wars and Guild Wars 2, and contains a wealth of dialogue that will delight long term players. A range of mini games are available. Hide and seek and a Sunspear dueling area are just two of the activities that are squeezed into this space. While Sun’s Refuge is not player housing, it does encourage players to invite their friends and group members into visiting their own instance. It allows players to interact with any items the instance owner has unlocked but still does not contain the same level of customization that exists in something like Rift’s Dimensions. It is, however, a long overdue addition to the housing style systems that have been slowly creeping into Guild Wars 2. Next time we see a personal instance, it may even be more than a modern Hall of Monuments.

For those that embrace the new instance, this also follows in the tracks of the Roller Beetle, creating a definite stickiness in Jahai Bluffs. It provides map specific rewards that do not simply rely on farming the local meta for currency every other day. It makes these rewards vastly improved upon the overall accessibility of reward tiers.

Usually, Living World updates stick with me because of the incredible writing, the interactions between the characters, and the impact it has on Tyria. Instead, A Star to Guide Us continues a recent approach that leaves players with useful rewards that stick with them beyond the end of this episode. The move away from map specific currencies, the new Legendary weapons, the upgradable armor sets that players can earn through Sun’s Refuge, new mount skills, and even the addition of Sun’s Refuge all enhance the game far beyond the borders of Jahai Bluffs. While the newest point on Tyria’s map doesn’t appear to be the largest we’ve seen in a Living World update, the amount of content is a little staggering. I’m hesitant to even call these Living World updates anymore. At this rate the Living World update is beginning to bring incremental expansions to Tyria already. A Star to Guide Us is out now and you can get it for free simply by logging into Guild Wars 2 between now and the next Living World episode.