Nilfgaard, Northerners, Monsters, Scoia’tael, and Skellige, whatever your persuasion prepare to go on a brand new adventure this year. Gwent, the Witcher card game, is working on its first ever expansion. While we wait on the new update Gaiscioch had some time to chat with Jakub Szamalek, senior principal writer on the Witcher franchise, about Thronebreaker.

Thank you for talking to us today, what can players expect to see in Thronebreaker that makes it distinct from say, just another deck expansion?

So ThroneBreaker is a single player campaign that's five maps that you can explore and visit. Each of them shows a different part of the Witcher world and ThroneBreaker combines the card mechanic that you know from multiplayer Gwent. So from the content that’s already been released with a story told through a fully voiced, interactive experience and a non-linear story, that's pretty much the size of the Heart of Stone expansion.

What updates are we getting with Thronebreaker, other than this new story?

When you buy Thronebreaker you don't just get the story content and maps. You also get twenty cards, ready to use in the multiplayer, right away. To get the premium versions of the animated cards you have to play the PvE game, find secret treasures, and unlock them via side quests.

How does Thronebreaker tie itself into the wider Witcher universe?

It's set during the events described in the books. Thronebreaker takes place before the Witcher games. Characters known from both books and games will appear in Thronebreaker and new characters will interact with the characters that you remember from our previous titles.

How much freedom do you have in telling your story by placing the game in this period, rather than during the game’s timeline?

In some ways it gives us more freedom because we explore part of the timeline that hasn't been realized in the games before. However, on the other hand, we know that we don't have as much freedom in shaping up the outcome of the whole campaign. It has already been described in the books and this is canon. When we were making the Witcher series, which takes place after the books, we could decide which killed Kings were assassinated by hired killers; which countries fall; or which grow in strength, but once we get back to the events described in the books we have to stay true to the key facts. I would say there was still enough room for us to come up with a unique new story or even a welcome surprise for those who read the books. 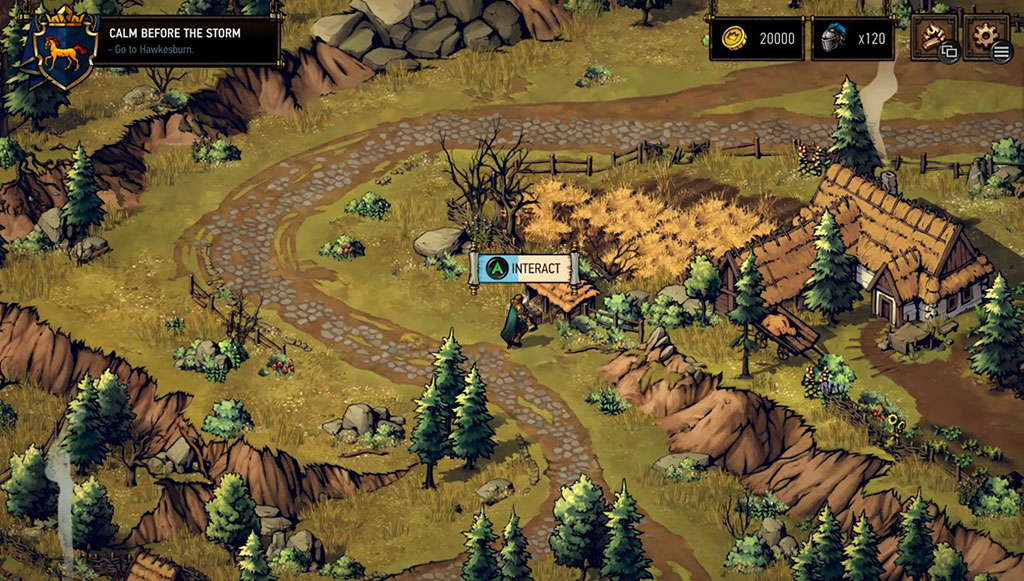 Was it a particular challenge to stay true to canon and keep continuity correct?

Well, we basically knew the final outcome of the story and we knew one important event, which is the battle for the bridge described in the books. We knew here that we had to stay true to the vision of the books and Andrzej Sapkowski, but in between these events we had a lot of freedom and we could come up with whatever story we wanted to tell so it wasn't too hard.

Was there a particular decision process in deciding to delve back into the books rather than say, jump forward in time?

We felt that our campaign should be set during a time of a military conflict and because, naturally, it’s a Gwent game you are leading an Army into battle which you want to grow in strength. Showing the same war we did in the first part would be revisiting the events that players already know. Coming up with a completely new conflict far into a future that's not supported either by the books or Witcher franchise, felt like a lot of work that's possibly unnecessary. We do have the other war that’s happening with Nilfgaard that took place before the books and is so well described by Andrzej Sapkowski. This felt like a natural fit for this Gwent campaign.

How important is individual character dialogue to building that world?

Oh, it's very important. Dialogue between characters and during personal stories is incredibly important. We at CD Projekt Red always take pride in the fact that we tell good stories. We strive for excellence when it comes to narrative. It meant that even though Thronebreaker is a very different game from the Witcher 3 and it operates with different mechanics, the story should remain as good as it was in Witcher 3.

Thronebreaker is fully voice acted, which is a huge endeavor. Was it crucial to do this?

Yes, we really insisted on this. I feel that once a line is read aloud by an actor it really comes alive. Of course, there are great games that don’t have voice overs but the emotional impact of those lines is sometimes less obvious. Even though it was a lot of work and it is hugely expensive, we were pretty strong about this. We felt that to tell a story it needed to be fully voiced. There’s a lot of content in Thronebreaker, including non linear stories and the voice acting of this is absolutely excellent.

Do you think that this helps convey the consequences of the decisions you take in Thronebreaker?

Absolutely. When you hear the emotion in somebody's voice, if they are relieved or angry about your decisions, it really helps to drive the point home and yes, there's a lot of consequences. Some of them are immediate and you know right away what you did, and sometimes we revisit the choice we made hours before to present a surprising consequence.

I take it not all of those are good consequences? Does that ever make you want to go back and change your decisions?

Sure, but if you feel that, it means that there was an impact and that you care about the story, so that's always good news. I, of course, sympathize with players who come to regret their decisions but I think this is what makes the choice interesting. You have to pause and think twice about what to choose and consider your choices. That's what really means that the story was well told.

When I read choose your own adventure novels, I always end up with my thumb between pages ready to flip back. Will players be able to flip back or replay scenarios to change their outcomes?

Well, at first when it comes to immediate consequences it is easier because you can go back to your latest save, but this is why the consequence of some of the decisions are only revealed after hours of gameplay. You have to be really determined to change the outcome because then you have go back a few hours and redo a huge chunk of the game. In most cases I think players stick to their original decisions and live with the consequences.

Does that add a level of replay value to the game and can the game diverge in different directions because of these consequences?

Yes, absolutely. Each of the quests have some familiar parts and some wildly different outcomes. There's another layer of non-linearity in comparison to the Witcher 3 in that Meve is surrounded by her advisers, officers, and champions. So basically you have a band of followers that are with you, but they are often in conflict with each other and can be mutually exclusive. If you follow somebody's advice all the time, others will get offended and might leave your entourage. As a result, you cannot go through the whole campaign with the maximum amount of followers because sometimes there will be irreconcilable differences between them. Their presence changes the flow of the quests. For example, you can avoid combat if you are accompanied by somebody who is able to convince your opponent to part on peaceful terms. In other circumstances when you try to avoid combat some of your followers are so principled and so determined to fight the enemy that they will charge in, forcing your hand. The makeup of your party really changes the flow of the game. 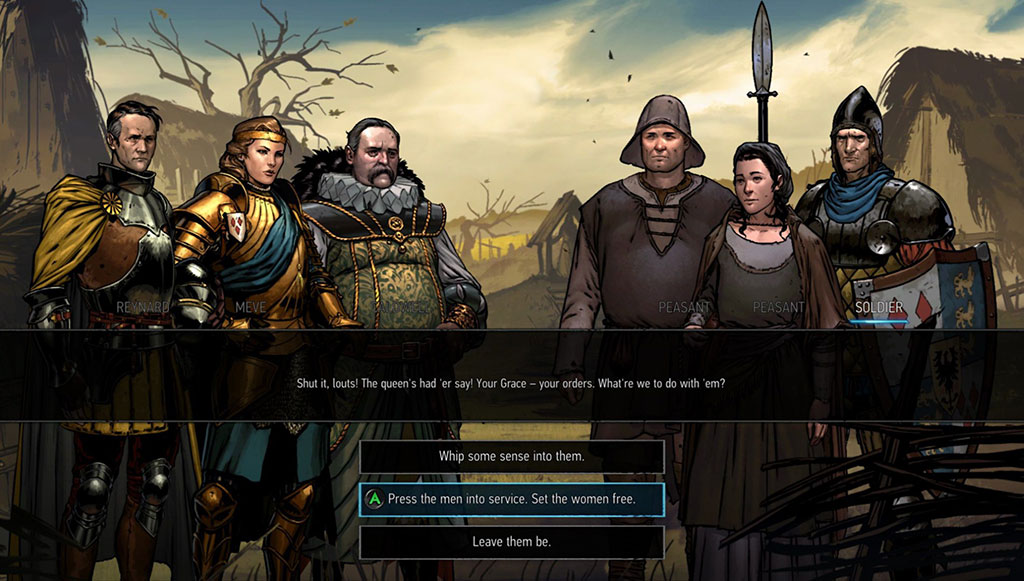 How many followers are you able to gather throughout the game?

If my memory serves me well, it’s about eight.

As well as followers, you can also collect new cards. How many new cards can you collect in Thronebreaker?

There are twenty new cards that you can use in the multiplayer and on top of that there are dozens of cards that you can use in the single player modes. This means that battles and combat may play out differently in the two modes. As a result we do not need to worry too much about balance between the two modes and we can create some cards that might seem overpowered but work to convey a sense of power. We can even turn some battles into logical puzzles where you have to figure out the particular way of playing. There's a lot of variability in terms of mechanics in comparison to the multiplayer, when taking this approach.

And when is Thronebreaker coming out?

Well, at this point I'm going to say this is coming out this year but we will have more information on playgwent.com as soon as we have it.

In Wild Hunt, you as Geralt embark on your most epic and dangerous journey yet. Your mission -- to find the child of prophecy, an ashen-haired girl, a living and highly volatile weapon everyone wants to control. The stakes have never been higher: the Elder Blood flowing in the child’s veins can bring about a final end. The fate of worlds lies with you.