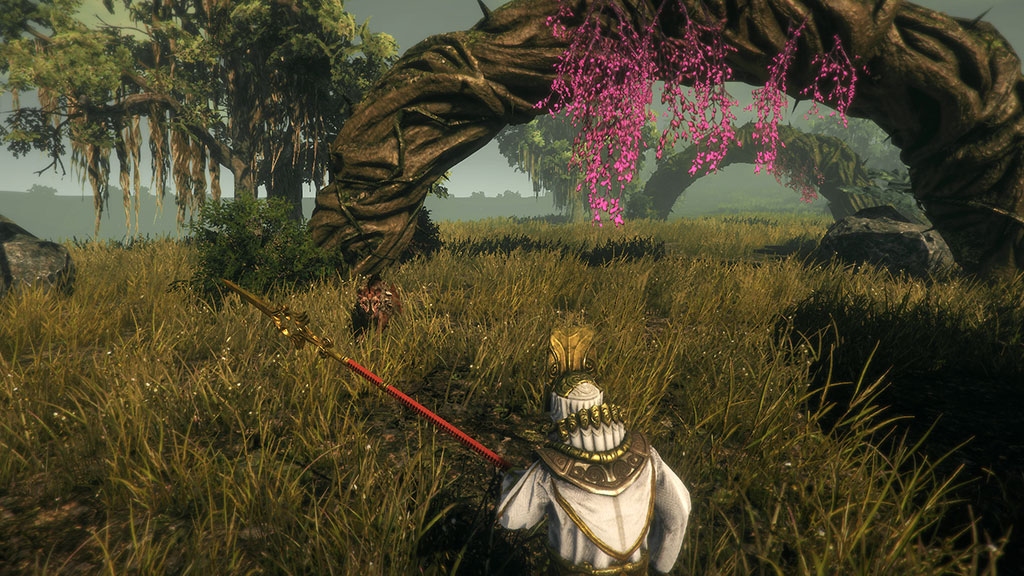 I will admit this, I knew little about Outward going in. I had just seen a press release a few days prior and it visually reminded me of the old Gothic series that came out of Germany in the late 90s. I'm a sucker for these style of games so this one I made a special request to score an interview with a developer. Little did I know, Guillaume Boucher-Vidal the President & Game Designer that I would be interviewing was actually a Gaiscioch member.

He joined me in a cooperative playthrough of a special dungeon map that they set up for the show, explaining the core mechanics as we went. The game felt like a cross between Dark Souls and Risen with a heavy Elder Scrolls Morrowind influence.

Guillaume lead me through a dungeon where I had to carry a lantern on my backpack to see where we're going. Yet, if I had my backpack on I was unable to dodge. To allow myself some mobility I had to drop my bag and lantern on the ground. There are a lot of subtleties in the game that bring an aspect of realism into the game.

After a while we defeated the boss and made our way to the surface. Once we were outdoors Guillaume showed my how to setup a camp and carry out some basic crafting. He tried to teach me how to cook but I went a little ahead of his instructions and ended up eating my meat raw. Not as effective as, you know, cooking it first but it got the job done.

The story behind Outward doesn't make you into some supernatural hero meant to save humanity. You're a simple adventurer and explorer out for survival. You can play Outward solo or with a friend both locally and online. In this game you will need to eat, drink, and sleep, and your foes will be more than just npcs. The weather will impact your gameplay based on what you're wearing. You can get an infectious disease, and you will find terrifying creatures that wander the night.

Outward also has dynamic defeat scenarios that place you in unique situations upon defeating. Some of these situations might include being held for ransom in a bandit camp or being dragged out into the woods, stripped, and left for dead. The game is constantly auto-saved, so there is no "woops, let me load my save." Every defeat forges your path forward.

You can learn more about Outward by heading over to https://www.ninedotsstudios.com/outward or follow them on Twitter at: @ninedotsstudio

Outward delivers an immersive RPG experience coupled with survival gameplay, offering a deeply-rewarding challenge for the most avid gamers. As an ordinary adventurer, you’ll not only have to hide or defend yourself against threatening creatures, but also brave the hazardous environmental conditions, protect yourself against infectious diseases, make sure you get enough sleep, and stay hydrated. Embark on perilous expeditions across untamed lands to reach new cities, undertake varied missions and discover hidden dungeons crawling with formidable enemies.