How-To Get Cooking in the Black Desert

It doesn’t take long to figure out you need cooking or money for the marketplace to buy what you need from other players. Most people have workers doing something and the workers want their beer! Not everyone wants to spend the time cooking, but for those that do, here is how I did it.

Getting Started in Velia

When I reached the second ‘city’ of my travels, Velia, I learned a lot of things about housing, workers and some of the life skills in the game. If you are not sure about housing and node management you can check out my Node Management article released in Issue 9 of Gaiscioch Magazine.

One of the things I acquired was a free ‘naive worker’ to do something with. I also got told my worker would need to be fed with beer. Obviously at least one worker was going to have to do some potato harvesting so I could make it myself. Any grain will do, but at this point in the game the main grain of choice was the potato. I never considered them as a grain, but they work in cooking just like wheat, barley, etc.

Beer is easy to make, but goes beyond simple cooking. I needed a cooking utensil to make it. I then needed a residence to put the cooking utensil into. Are you starting to feel the complexity of this game yet? This was day two of my adventure.

So now that I have my house and a worker filling up a storage space with potatoes, where do I find my cooking utensil? Go to the inn and talk to Chef David Finto. He will not only have a starter cooking utensil, but you will visit him a lot for the basic ingredients for cooking that you can only buy. Every city has someone that supplies these ingredients for cooking. Also, quests may point you to the chef for the cooking utensil. Shelley, who is doing the dishes behind him will start giving you cooking quests as you progress through Velia life quest chains and level your cooking.

You do not have to do any quests to start cooking, just get the utensil and figure out the recipes. The fastest place to find an easy recipe guide is at http://www.blackdesertfoundry.com/2015/05/03/all-recipes/ where Tansie has been doing a wonderful job keeping lists of cooking and alchemy recipes.

Take your new utensil to your house and enter place mode via the button at the top of the screen. I can’t remember if there was a quest in Velia to teach you the basics of this or not. You will see a list of a lot of things along the bottom that could be added to the home that can be purchased with Pearls. The cooking utensil should show up as the first item you can place as new to the home. It may come after a bunch of items with red check marks, which are items already in the home. I am up to making and using my own advanced cooking stations, but the icon in the list will look the same as it does in your inventory.

Left click the cooking utensil icon on the list and you should see a shadowed out version of it in your house. You can use the directional controls to move it and spin it around how you want, like any item you place in your home. I pulled mine out for a screenshot and when I tried to put it back, my character was standing too close and it told me I could not place it on top of her. Also, make sure it is not next to a wall if you want to spin it for aesthetic orientation, as the walls physically stop the motion. It is usable in any position, but you may want your place to look cool too! 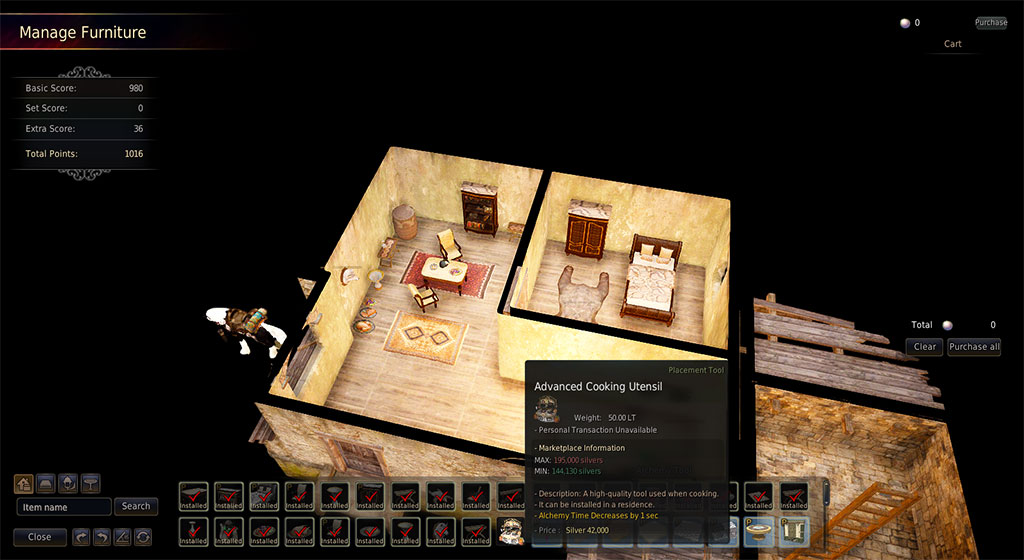 What do I need to make beer? 5 potatoes, 6 mineral water, 1 sugar and 2 leavening agents combined in your utensil will do a one-time cooking of beer. As you level you will start getting more than one or two beers. At upper end of skilled, I can get up to four beers with one combination of the ingredients and have some good chances at getting Cool Draft Beer, which restores a point more to the worker consuming it than regular beer. It will also take one energy point for every time you cook.

The nice thing with the cooking utensil is that multiple recipe completions can be set up. Say I want to continuously cook beer 100 times. I would need 100 energy on the character plus: 500 potatoes, 600 mineral waters, 100 sugar, and 200 leavening agent. I would put in the amount of materials it takes to cook it once and then click the continuous production button. Say yes to continue if you are sure you have the right number of items in the cooking utensil. A keypad will pop up and you can click the maximum button near the bottom and it should tell you that you can make 100 if you have the amounts I listed above in your inventory. Your character will continue to cook until done, they run out of energy, or the utensil durability runs out. It takes a lot of cooking to wear out the utensil, even for the starter one. If you are new to the game, your energy will be the biggest restriction on how much you can do at once. 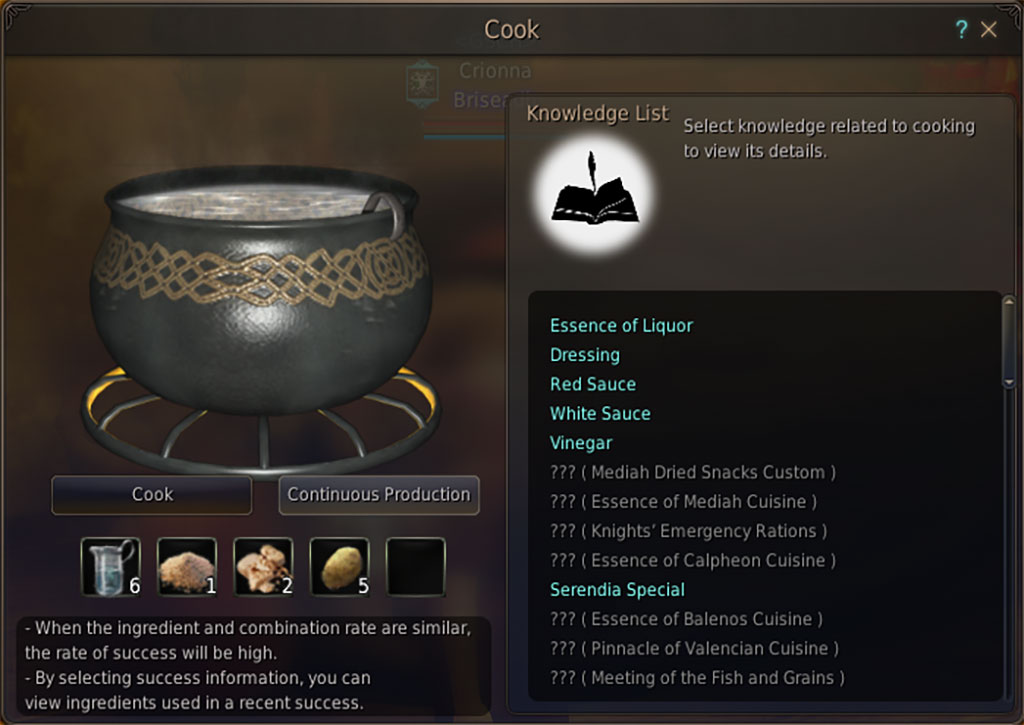 You will also acquire five different side dishes while cooking, so keep inventory room open for these as they appear. These can be turned in mostly in Heidel although one is out at Aljendro Farm, to get cooking experience, contribution points, milk, beer, and money. If you right click on the side dishes you will see an option called ‘NPC Location’ that will give you a path to the person wanting that side dish.

Cooking for your workers will help level your skill easily in the beginning. However, there are some good food and drinks for buffs to help you with both your fighting and your gathering. I like the gathering food because it can add speed and experience boosts to the gathering process. The variety of fighting food is plentiful, with buffs that will help the various classes. If you have pets, guess what, they want food too.

If you truly want to master your cooking you should do the quests you find on your journeys. The quest givers in Velia will send you off to Heidel when you are ready. The other way to find quests for life skills is via the Black Spirit’s guide. He will be rude about it, but he will tell you who to see. All quests from him give the wonderful guided path to follow. I guess he doesn’t want you getting lost trying to find the person.

Completing quests will lead to acquiring things that help with your cooking. Certain cooking skill milestones will give you achievements to claim. When I reached Professional level I got a cooking outfit that added 10% experience to my cooking if I was wearing it at the time I cooked or handed in my cooking quests.

Many of the quests will give you cooking ingredients for which I usually take the milk. I can do the milking game pretty good, but I know people that have issues and if you have lag it can be terrible to play this mini-game. I use a lot of milk making oatmeal since it feeds my workers faster and it is also used in the better organic pet food. Changing to oatmeal when you can rather than sticking to beer will also level you faster.

Why do I need this for cooking? Some of the ingredients are only acquirable through farming. You can hope someone puts some on the market to fill a preorder, but a lot of times onions go rather fast. You need them as part of the oatmeal recipe. Pepper is another good item to be growing for cooking. If you are into making some of the good teas they have, one of which comes with an experience bonus, you could farm flowers. I usually just go to the Northern Wheat Plantation near Calpheon and gather as I don’t have a huge farming production.

You learn about farming at the Northern Guard Camp just before you reach Heidel from Velia. This will give you a plot that will allow you to do one plant that fits in one space. From there you will need contribution points to rent more plots. The plots will stay down for a week and will renew as soon as you plant something new in them. The largest plot will allow for up to ten spaces of farming.

You will need a tool shop to do this. The nice thing with all the workshops is that you can check out the materials you need before hand to make sure you have them in storage. This ensures your worker will actually do something. The game nicely tells you if your worker’s storage does not have the required items. The worker will only work with the storage in his hometown even if he will travel to workshops in other towns for you.

When I first started I acquired the tool shop in Velia and made it a level 2. I could at least make an intermediate cooking utensil. If you want to make advanced cooking utensils, the next closest location to do so is Glish, south of Heidel. A level 3 tool shop can be acquired there.

Cooking is a great thing to do in the game to feed your workers, pets and yourself. It does take some coordinating, but is well worth your time. You will benefit when you go into battle and via the money you save on worker and pet feeding.