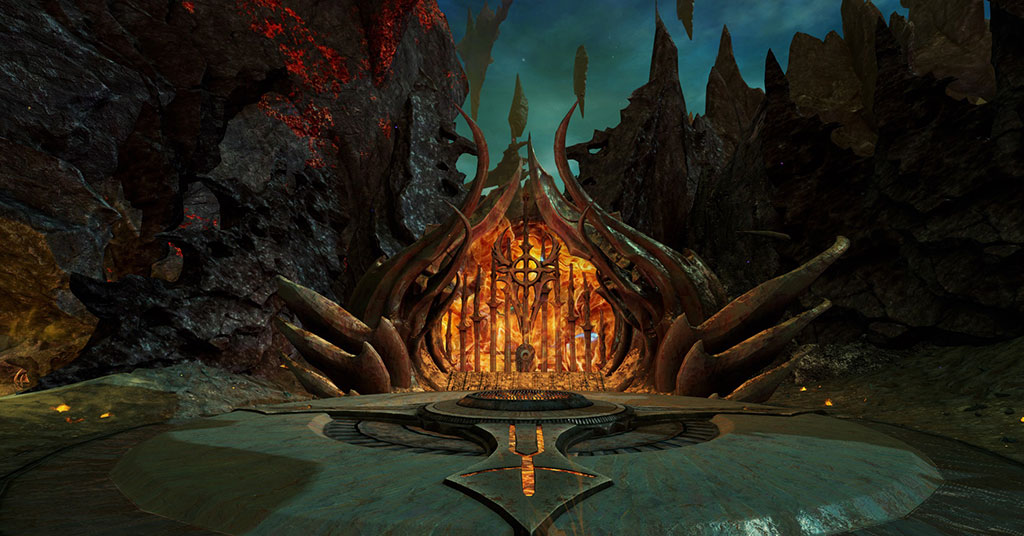 I expected something similar, but with a brand new flavor. I am not disappointed. The new zone is gorgeous. The monsters have cool ways of trying to kill you, let alone never seen before additions. There are multiple challenges to getting masteries. Let’s not forget mounts!

Every class has a new specialization they can add. I decided to use my elementalist as my exploration character, so I installed the Weaver specialization on my build. This proved interesting because with it you are not in only one element. Each time you change, the one you select is your primary and shows on skills 1 and 2 and the previous primary becomes the secondary in slots 4 and 5. Slot three is a new combo skill based on which two elements are up.

I hardly play with it other than to see how it rotates and plunged into the Path of Fire. I, however, decided to stick to my staff rather than trying the new sword. At least, I knew my skills.

To get to the new content you have to do a story quest called the Prologue that starts in Lion’s Arch, with you requesting a ride to the Crystal Desert alone to go beat up Balthazar. I found this amusing because I’m off to kill a god, not just a dragon.

Due to issues we can’t land in a safe place. No, we must help clear out a mine and then the village beyond. The fights are soloable, though I died about six times and in part due to my disabled hands. Weaver helped me solo it. The fights flowed nicely and then helping the villagers all made sense to the story. I enjoyed myself and laughed through my mishaps.

Once through the Prologue you will have your first mount, the Raptor. You will also find yourself in the city of Amnoon. From here you can explore and continue your story at will.

There are four mounts: Raptor, Springer, Skimmer and Jackal that have masteries and are listed for you to see. Each one can be trained up to do more skills via Mastery Insights. On your mastery page you will find Path of Fire. When first starting the only open one to work on is your Raptor. Mounts work a lot like gliding from Heart of Thorns in that you get more skills and can get more places. Most of them have a skill that makes them much stronger in their primary use. The Raptor will jump further, the Springer will jump higher, etc. This skill is the third one that can be mastered. Once I had the Raptor through the training of its third skill, a note popped up about where to go find the Springer. I liked this tooltip and glad it could be rechecked of where I needed to go when ready to do so.

The fun thing with the Raptor mount was using the tail swipe to damage things. It dismounts you, but it is one way to run into a fight and get some minor AOE on your enemies before you jump into your own skills. All of the mounts have some form of attack that dismounts you in the process.

Even better, once one character has done the Prologue, all the characters on your account have access to the Raptor mount. All of the other mounts can be acquired as you progress through the Crystal Desert zones and are account wide usage upon acquisition. You will have to pay for the mounts you find after the Raptor.

There is a mount, the Griffon, that is not listed in the PoF masteries, but he is the fifth mount you can acquire while exploring the new maps.

Mounts can be used in most PvE areas outside of PoF, as well. This brings a new dynamic to the game.

These all work like they do in other areas. However, PoF adds some new dynamics to reaching some of them due to the new mounts. Many in the first map can be reached without more than the basic raptor, but there are enough where you will want the other mounts. I like that they make you need to acquire them all over time, just like you had to level up gliding and other things to better traverse the Jungles of Maguuma.

The vistas do a fine job of showing off the artwork of the new zones. A couple of my screenshots for this article are from viewing a vista. I love how the area has its own unique look. The only place that gave you a minor taste of the Crystal Desert was in Blazeridge Steppes.

I think the most challenging mastery and the first one I ran into was being a sous chef. For one, my hands don’t work well so I do hit the wrong button more often than I want. I still, despite being frustrated many times, had to laugh as I tried to grab the right food and throw it at the head chef, who did not stand still long and had several places he would move to. Figuring out where over a dozen food items were and then getting them to him on time proved infuriating at times. I doubt I am alone in wondering if it could be done because I was not the only one that took several tries at it. This seemed appropriate for a mastery in Amnoon.

You can roam solo, but as a group you can beat on champion level content that occurs quite regularly. I think in a two hour run of an event around Crystal Oasis, we killed at least 7 or 8 champs. One of them will run around rampaging at certain health intervals and the only way to stop him is by at least five people getting close enough to lasso him. In our group of 25 or so, this proved quite easy.

Everything scaled well to the number of players entering the event area. It made the champions still feel epic, even with 25 of us beating on them.

Like any addition that ArenaNet has added to GW2, there were new things to dig up, uncover, loot, etc. I recommend an inventory with lots of space when you first explore and start acquiring them. Thankfully most of these new things stack and many are consumable. I found it easier when running with the large group for a couple hours to let them stack up and consume them when I was done.

Several of the new items are consumed for various amounts of karma. I have seen around five or more different types of consumables of this type. I have also noticed that the second map had some new names for them compared to the first map.

There are also new item drops that are unidentified which are salvageable. You don’t have to identify them unless you want to. I found it easier to just salvage the blues and greens, but did identify the yellow grade items out of curiosity despite salvaging them, as well. 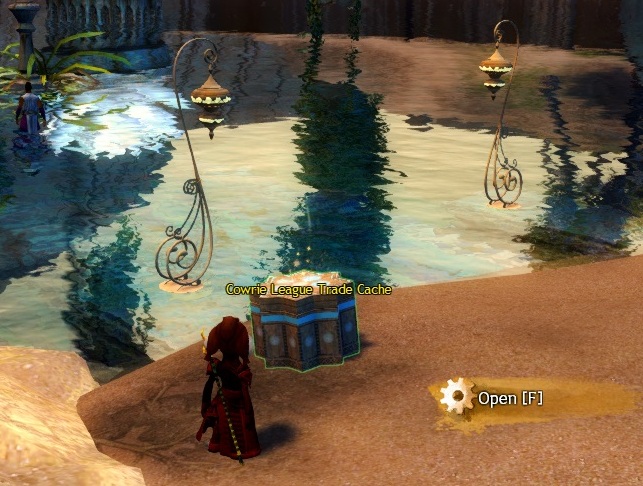 Another important item are Trade Contracts. These are the new currency added for PoF. You will either have it directly deposited into your currency wallet or you will find consumable ones in your inventory. I’m not sure why they went with a combo of direct to the wallet and with a consumable. However, it makes sense that completing hearts and missions gives you direct deposit and loot off mobs out in the world give you a looted item version to consume later, like having to change a banknote into money.

Then there are the Trader’s Keys that will open up all sorts of chests throughout the Crystal Desert. In the first zone you can find these keys in piles of bones. You also may get keys when you open chests. You can also buy the keys from heart vendors for a cost including Trade Contracts. Though initially it is best to not buy them and save your currency to pay for your mounts. Go hunting in the Crystal Oasis and don’t forget to check out them bone piles for more keys as the cheapest way to get them, though it may be more time consuming.

I found this new expansion thoroughly enjoyable and a delight on the eyes. I find it better than the Heart of Thorns, though I did enjoy it and still have some things left to clean up there. I am only through the first two zones upon writing this, but will probably have most of it done by the time this is published. I hope you enjoy the Crystal Desert and all its new wonders as much as I have.

Thank you ArenaNet for the opportunity to enjoy another great expansion to the game and I’m looking forward to how the next chapter of the Living Story ties in with this. 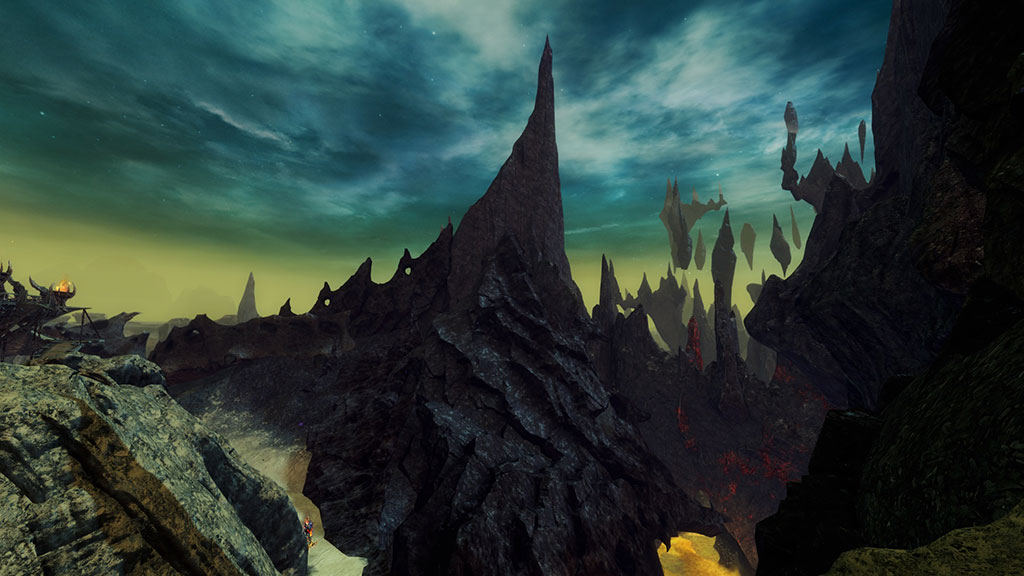