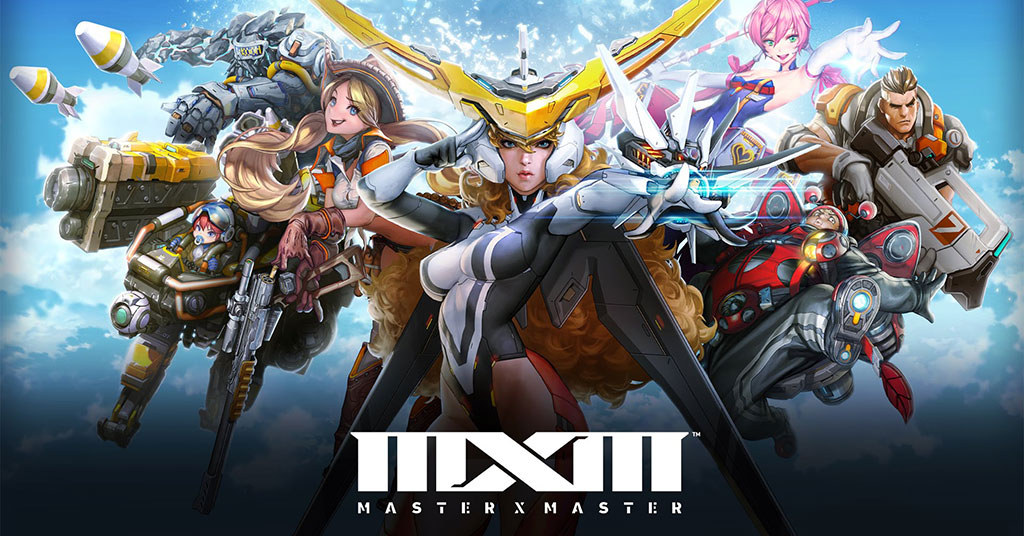 Recent years have seen an almost insatiable appetite for MOBA games. With its already massive player base, Korean publisher NCSoft has now developed their own take on the trend with Master x Master. Developed by team Bloodlust, it brings together elements of various genres and melds them with a host of familiar faces. Already confirmed are Rytlock Brimstone, Mondo Zax, and Jinsoyun. Featuring a full roster of 30 characters on launch, it presents an array of original heroes as well as other fan favorites from Aion, Wildstar, Blade & Soul, and Guild Wars 2.

Master x Master is currently undergoing open beta testing in Korea and has received generally positive feedback since it was unveiled last year. Although it initially presents itself as a highly polished MOBA, it has far more to offer than just three lanes of stylized destruction. Players can take part in a number of PvP battles and PvE encounters, taking on a massive roster of enemies, some of whom are familiar adversaries. PvE dungeons include several iconic villains from NCSoft’s vast library such as Blade & Soul’s Vice Admiral Powaran Boss. who has already been introduced in Korea. Full details of the PvE encounters have not been released, but NCSoft has confirmed that they are working to bring as much of the game to western audiences as possible. Unfortunately, I didn’t manage to delve into Master x Master’s dungeons or face Powaran when Gaiscioch was invited to take a hands on preview of NCSoft’s new MOBA. 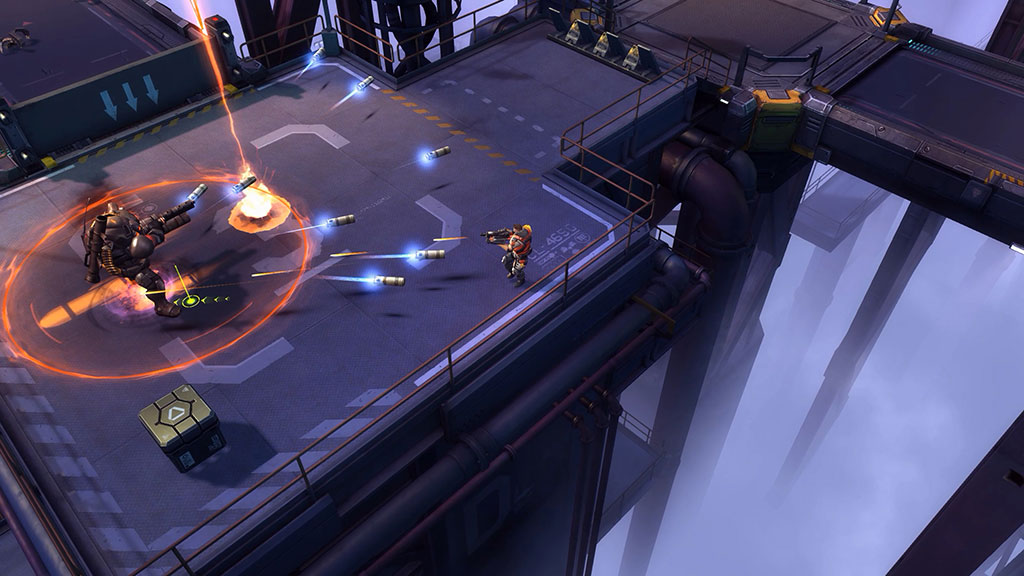 Starting out in the game’s lobby system, it is clear to see that Master x Master draws inspiration from a variety of sources. A top down, isometric view is reminiscent of several ARPG titles and it is heavily influenced by established MOBA trends. Bright modern graphics are predominant that will likely run on a broad variety of systems, while NCSoft has struck a good balance between accessibility and aesthetics. The user interface is decidedly uncluttered and has numerous visual cues similar to several other NCSoft titles. It is unsurprising to learn that NCSoft has taken this MOBA and added their own expertise to the experience.

Moving on from the lobby, the opening tutorial gives a clear overview of the game’s core concepts for players unfamiliar with Master x Master. Both WASD and click to move are available when navigating the map and combat skills are controlled using a combination of keyboard and mouse triggers. Players can choose to vault obstacles by jumping over them and even dodge serious threats, by dipping into a stamina reserve. This action combat approach to movement will feel familiar to many of NCSoft’s existing player base while adding plenty of emphasis on movement and situational awareness. 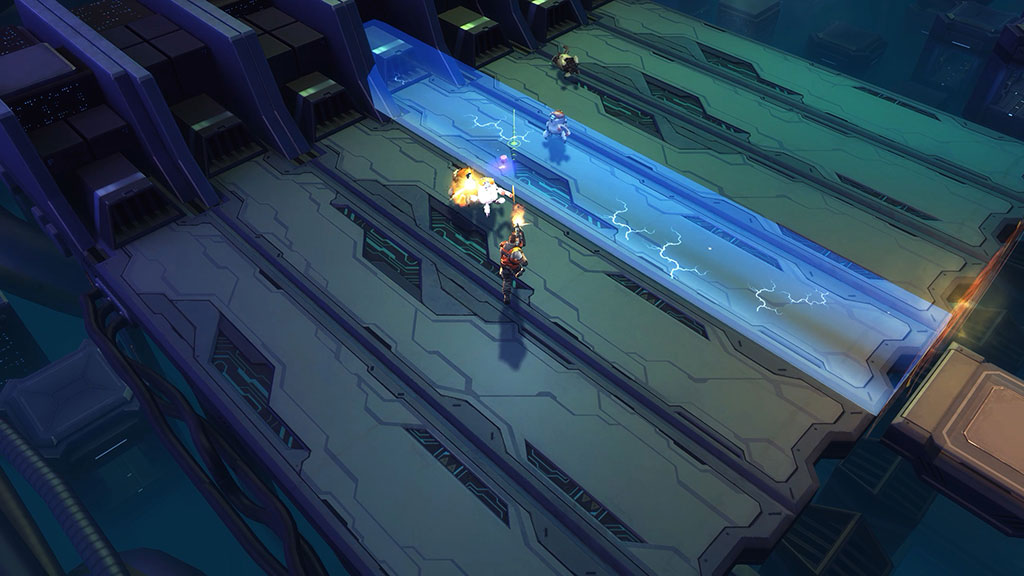 Combat skills are limited to a set of three active utilities and an auto attack. These skills can be upgraded and customised as characters gain experience using systems that do seem to allow ongoing character progression. The decision to limit players to three skills actually manages to enhance the whole experience with their scarcity. Rather than lobotomize gameplay, this limited action set adds significance to some of the game’s more unique features and clearly defines the role each hero plays. With a restricted set of combat skills available during any encounter, flexibility comes in the form of additional, hot swappable heroes. Prior to entering any engagement, players can select a secondary character to play and alternate between these at the click of a button. I found that this allowed me to react to the changing tide of battle and remain effective throughout. Alternate characters provide a second pool of health and even made draft selection feel less constrained by traditional meta than other MOBA games.

After cutting a swathe of destruction in the tutorial and learning to play as part of a unit, the remainder of my time was spent in one of Master x Master’s PvP arenas. Similar to much of Master x Master, PvP encounters initially seem typical of the MOBA genre. Towers, creeps, three lanes, and jungles are all present and functional. Creeps spawn, towers defend, and players clash in a familiar dance across the map. Getting started was easy enough for this newcomer but it didn’t take long for the game to spring some surprises. After quickly massing one hundred points, my team spawned a gargantuan, rock titan. These behemoths enter the fray at hundred point increments and carve a path through enemy defences, wreaking havoc all around them. With a massive health pool and a tendency to charge straight towards objectives, they present a serious risk to your enemies and can completely sway the tide of battle.

Titans are not a player’s only ally in team combat. Smaller, mini titans can also be called to your aid. Interacting with contested monuments, which are dispersed across the map, allows players to spawn smaller doses of destruction. These act in a manner roughly similar to titans, aiding your push towards the enemy’s base. Each monument is guarded by NPC characters, providing a ready challenge and an objective that specifically suits players who prefer to roam. The diversity of roles and subtle depth that PvP entails should only assist the game’s longevity.

Unfortunately, time was not on my side and this glimpse ended before my team could claim any real victory. Master x Master is a game that has a low barrier to entry, intuitive systems and subtle depth. Team dynamics can change in an instant, and each of the thirty characters has a definitive role to play. Whether you enjoy competitive play or just want to see Rytlock Brimstone face off against Jinsoyun you will find something in Master x Master.

Keep a close watch for more on Master x Master as 2016 progresses. 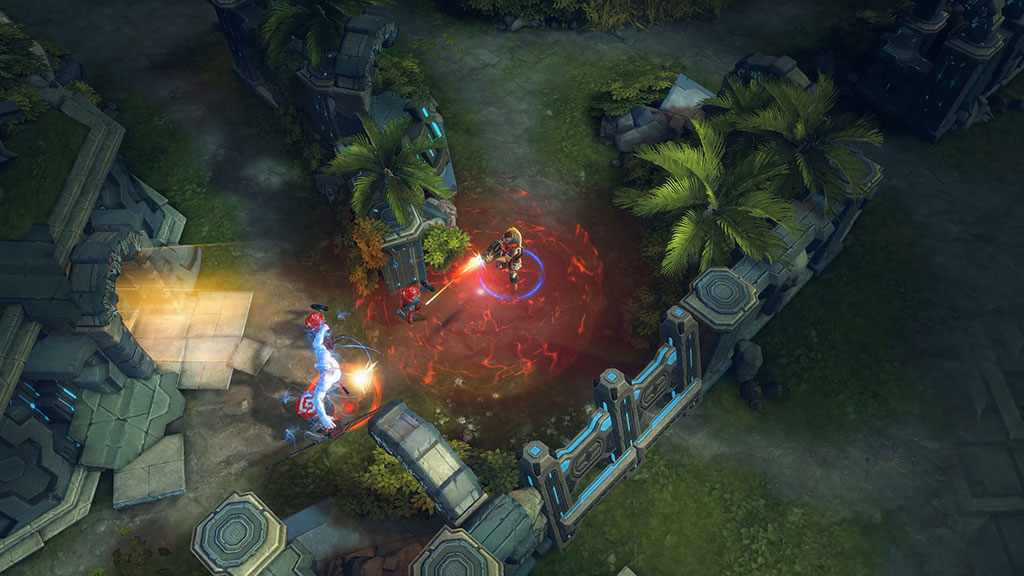 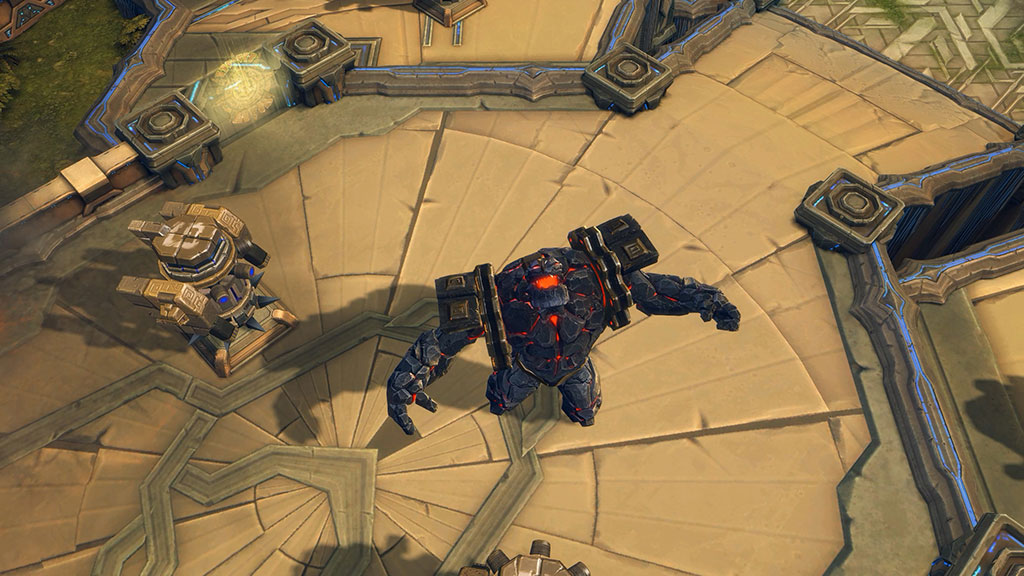 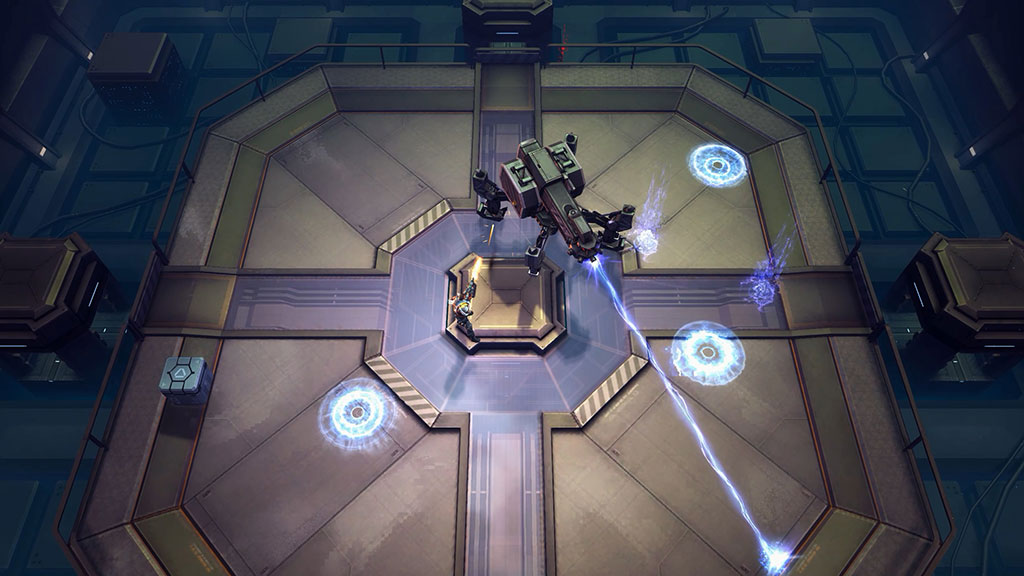 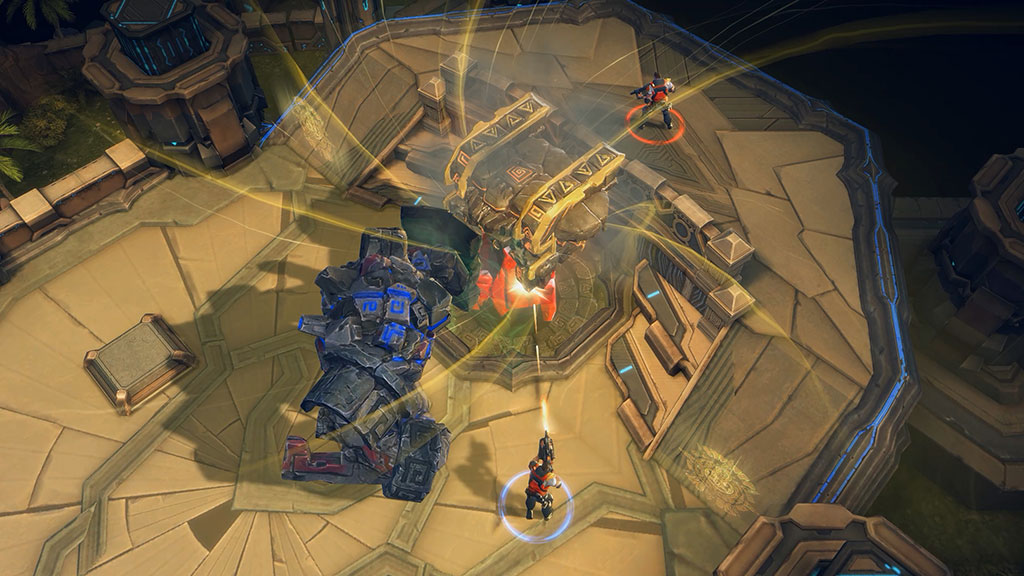 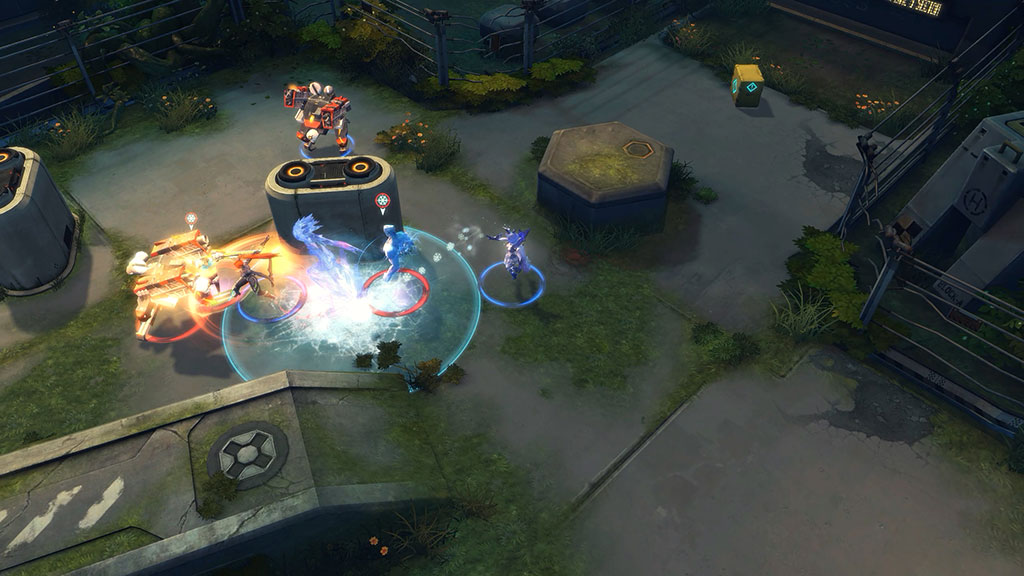 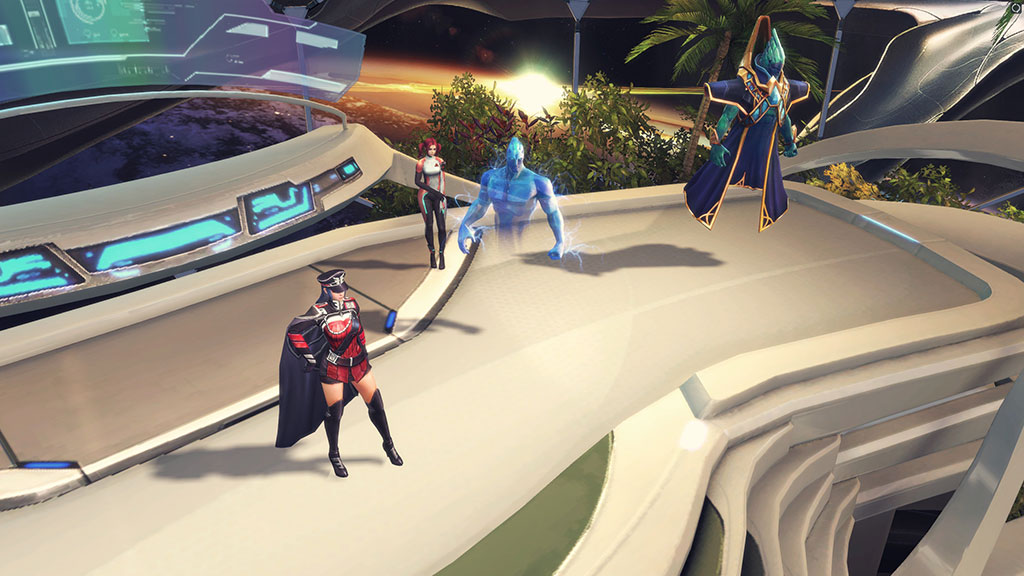