Guild Wars 2: Path of Fire is almost upon us. We’ve already had a glimpse of the expansion content. We’ve all felt the Crystal Desert beneath our feet and galloped across the sands on a raptor, but the expansion is more than that. It continues to follow the remaining members of Dragon’s Watch as they battle the rising power of Balthazar. Facing mighty adversaries and personal crises on unfamiliar shores will challenge our heroes like never before.

We got some time to quiz Matthew Medina, Content Designer on Guild Wars 2, on crafting Path of Fire’s story and how it will unfold.

With Living World it became evident that ArenaNet has had a massive story arc in place for a long time. How far in advance did you have Path of Fire planned?

Matthew Medina: Thematically, we knew even from the launch of Guild Wars 2 in 2012 that we would at some point be returning to the story of the human gods. As a result, we knew at least the high level story beats of Path of Fire, before Heart of Thorns shipped, as the Living World team was already beginning work on Living World Season 3 when we were finishing up that expansion. This enabled us to have a roadmap for Path of Fire’s narrative even before we began pre-production.

In many ways the writing team has done a fantastic job with Braham. Everyone seems to hate him right now. How are his actions likely to impact the rest of the characters during Path of Fire?

Matthew Medina: Braham is focused right now on the things that most concern him, and he won’t have a role to play in Path of Fire.

How does the old world of Tyria and The Crystal Desert intertwine with the new world? Will we see any of these legends again?

Matthew Medina: We’ve taken great pains to ensure that the regions of the Crystal Desert and northern Elona feel familiar and yet also like brand new places we’ve not yet been to. We worked very hard on incorporating important landmarks into the present time period, while ensuring that players can see just how much things have changed since the time of Prophecies and Nightfall.

One of the biggest problems that we see with ensemble casts is balancing the demands of multiple larger than life personalities in a given time. How do you manage that?

Matthew Medina: It’s always a challenge, and with this expansion, we set out from the beginning to focus our cast to a smaller, more condensed group that we could spend more time with and who each have unique things to add to the story.

The change from Living World to Expansion seems not unlike a move from a television series to the big screen. How did that change the way you told the story and paced content ?

Matthew Medina: Our format bears a lot of similarity to the film and television format, and by employing this strategy it’s continued to push us to make our story chapters more meaningful and concise, while also allowing us to focus more on characters and their bonds, relationships and growth as individuals. As a team, we’ve also had to greatly improve our own communication and to grow ourselves as we work to mature the medium of our story to meet ever-improving standards. 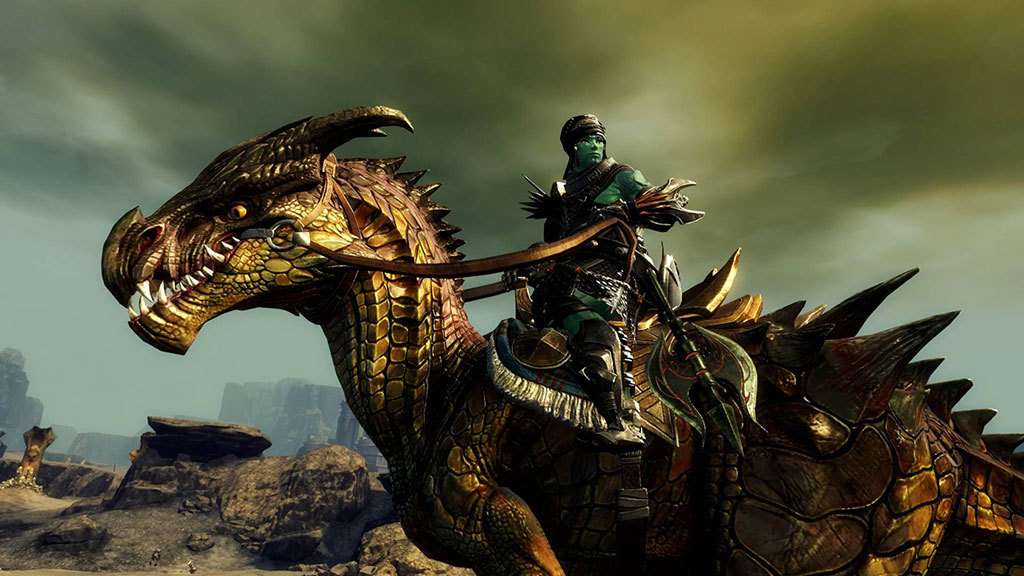 While the Path of Fire leads us even further into Tyria how do the characters that we leave behind influence the story both in the Crystal Desert and back in core Tyria?

Matthew Medina: We will get a small taste of what’s happening back in central Tyria at certain points in the story, but as with our other stories, we really want players to drill down and focus on the immediate threat that Balthazar poses to the region, and to the world at large.

It’s not just writers that tell a story in games. How important are the other aspects like environment and audio to selling a narrative idea to players?

Matthew Medina: Every element is critical to us, from the smallest detail of the audio track to the biggest game mechanics and encounters. At ArenaNet, a story chapter is a truly multidisciplinary effort, with designers, writers, artists, and all the other departments contributing in some way to the implementation of our story. A lot of work goes into every story instance, and we go through copious rounds of feedback and iteration to ensure the highest possible quality for each moment.

Balthazar and The Crystal Desert are a jackpot for those fans interested in the lore surrounding Tyria. How do you live up to the expectations of those fans and drop in lots of lore without excluding newer players?

Matthew Medina: I think it starts from the fact that the people building the story are fans ourselves, so everyone on the team takes their part in crafting the story very seriously. Our devs are constantly looking for opportunities to imbue the content they’re working on with that level of care and polish that we want to be known for, so we are always researching and reading up on what expectations would exist for a given release or piece of content, and we do as much as possible to meet and exceed those expectations. In particular, Path of Fire has a lot of nods to the lore of our world that we think fans both old and new will greatly appreciate, and we will lay down some new information as well.