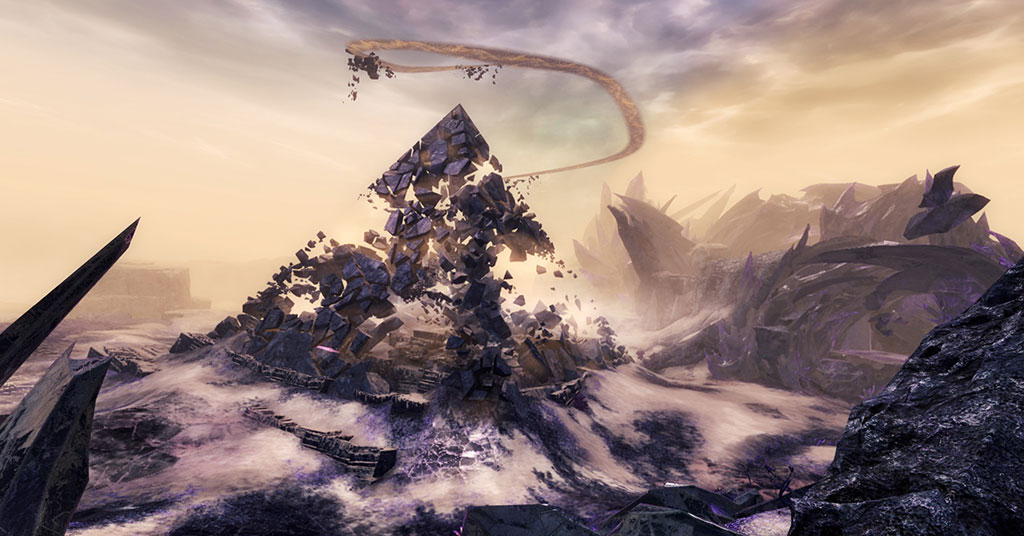 Sounding Out the Crystal Desert

The first time I stepped outside Amnoon, I took a rare moment of respite to just sit under the stars and listen to my surroundings. The wind that graces the sands around the port city brings more than a cooling breeze for those who take a moment, it delivers promises of a sweeping adventure, new exotic encounters, and a grandeur that Guild Wars 2 sorely needs. This was my first moments in the reimagined Crystal Desert and I quickly discovered Guild Wars 2’s Path of Fire is more than beautiful landscapes. While the beautiful vistas and incredible graphics included in Path of Fire might be worth a thousand words, the music of Guild Wars 2 really communicates in ways that dialogue cannot.

From the bombastic opening moments of the very first loading screen, through the quagmires of the Maguma Jungle, to the launch of the latest adventure, the Guild Wars 2 soundtrack has accompanied players on epic adventures. Now, ArenaNet release the latest edition to their musical adventure, the Path of Fire Soundtrack. The work of Maclaine Diemer, Wilbert Roget, Stan LePard, Brendon Williams, and a host of collaborators, this sweeping expansion was recorded across the globe, taking In performances from Seattle, London, and across Europe.

We had some time to chat to Maclaine Diemer about the music that make the Path of Fire. 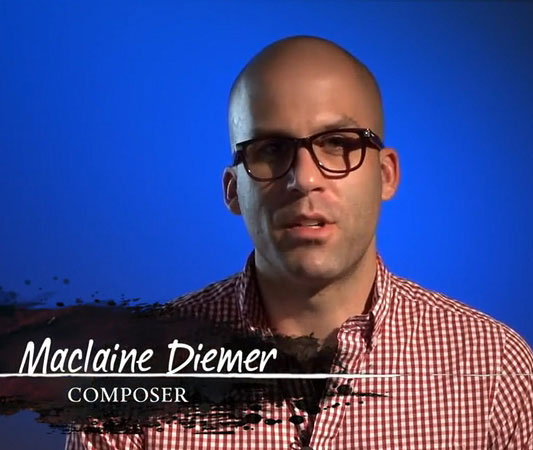 When the player steps into Path of Fire one of the first locations to set the tone of the expansion is Amnoon. Aesthetically it borrows a number of cultural ideas from the real world. How did you go about setting this scene and building a musical canvas that you could represent this with?

Two of the pieces that play in Amnoon were actually the first two pieces I wrote for the game, about a year and a half before it was released. I was asked to set the tone for the map and the expansion itself, and it seemed like a good opportunity for me to establish the palette we’d be using and breaking away from the Heart of Thorns sound. At that point, the game itself barely existed. If I remember correctly, there was only a very early version of the Crystal Oasis map. It was barely populated with anything beyond a few structures and some rough terrain. There was, however, lots of concept art. Concept art and ambient music serve a similar function, in that they are designed to convey the high level emotions of a map or scene. The tone of the map was very clearly established in that art, with grand architecture, sweeping desert vistas, and vibrant and exotic color combinations.

From the real world, there was clearly an influence from Morocco, North Africa, and parts of the Middle East. Musically, that led me to featuring types of percussion that are common in those areas like the djembe, frame drum, riq, and a bunch of other fun stuff, as well as some wind instruments like the ney and duduk. For the orchestra, there’s already a kind of musical language we in the western world associate with that type of setting and landscape. A lot of it starts with Maurice Jarre’s music for Lawrence of Arabia, which I listened to a lot when I wasn’t feeling inspired. For the music nerds, a lot of it revolves around the Phrygian mode with a raised 3rd scale degree. In layman’s terms, it’s a variation on the normal minor scale that instantly gives a sense of mystery and exotic locales. Another sound I really wanted to use was entire string sections playing in octaves, with heavy use of portamento (a technique where you accentuate the leaps between two notes by sliding between them on the string). It’s like an instant recipe for “desert music”. Sometimes the old tricks are the best ones.

Much of the game play in Path of Fire seems to have moved back towards the kind of sense of wonder and exploration that ran throughout the core launch. Was there a move to replicate this in the soundtrack?

Absolutely. The soundtrack for Heart of Thorns intentionally mimicked the map setting and level design, i.e. dense, dark, and claustrophobic. One of the very early things that was discussed for Path of Fire was that the maps would be huge, bigger even than the core game. This was specifically so you could have a lot to explore with the newly added mounts. Guild Wars is no stranger to epic, sweeping music, but over the years I’ve tried to take it in a slightly more stripped down direction. Some of the music in Heart of Thorns, like the piece called Rata Novus, has a big cinematic feel to it, but the music itself is pretty minimalistic. I think it works really well for that game, but I knew we’d have to go back to big, soaring string lines, bold brass, and heavily layered percussion in a way that we avoided with Heart of Thorns. If you’re sailing across sand dunes on the back of a flying manta ray, you need music that matches that feeling, and “stripped down” isn’t quite the right vibe.

While the locations play a huge role in the soundtrack, characters and creatures also have their own distinct part to play in the game. How to you infuse the soundtrack with these new faces?

It was really important for me to make clear distinctions between the various creature armies you face in the game. I spent a lot of time (maybe too much) thinking about how to convey the essence of these creatures musically.

For instance, the Awakened are essentially undead, and their design incorporates elements like sand, tar, bones, and scarabs, so their music is slow and ominous, with dissonant passages of strings going slowly in and out of tune. It also features brass instruments played with mutes, which gives it a thin, hollowed out sound.

For the Forged, the idea is that they are souls captured in suits of armor. For their sound, I combined violin harmonics, which have a scratchy, whispy quality to them, with crotales played with a violin bow. Crotales are like tuned metal discs you normally play with a mallet, like a xylophone, but if you play them with a bow, you get a sharp, metallic ring that’s almost a little painful to the ear.

Even though these kinds of details don’t usually stand out to most players, I think it’s important to put some intention and thought into the musical choices for every piece. It helps solidify the connection between the music and the game, and that’s always my primary goal.

What, if any, influence did existing pieces for locations like the Silverwastes, and even the first Guild Wars soundtrack have on Path of Fire?

I wanted to separate the Path of Fire desert from the Silverwastes desert a bit. While they’re both desert locations, they’re pretty different beyond that one connection. The only thing that really crossed over was a heavy focus on woodwind instruments, particularly flutes. They are sorely underutilized as a section in movie and game soundtracks in general, in my opinion, so I think they instantly stand out when you hear them now. They blend together so beautifully and also shine as solo instruments, and to me they also do a great job representing a desert breeze shifting and shaping sand dunes in a wide open landscape.

There is also a good amount of thematic and melodic material from past Guild Wars games sprinkled in here and there. It’s primarily from the Nightfall expansion, however, since Path of Fire is set in a lot of the same locations, I didn’t want to completely recreate some of those old pieces. I felt I owed it to fans who spent time with the original game to pay homage when appropriate. Sometimes I would try to use a melody as a starting point or an anchor for a piece, and sometimes it would just be a chord progression to hint at the previous music. There are a few really sharp eared listeners out there who are good at putting the musical clues together, so I’m curious when and if they find the little bread crumbs I’ve left for them.

With the Heart of Thorns piece there's always one track I find sticks out as unique among the rest. The Jaka Itzel in particular. What was your stand out moment from the soundtrack?

There’s definitely a spiritual successor to Jaka Itzel on the Path of Fire soundtrack. It’s called Pricklepatch Hollow, and it’s the theme for the Choya, who are these goofy looking but dangerous little cactus people. I always like when I can do something a little out of the ordinary for Guild Wars, and those two pieces are it, almost completely lacking in orchestral instruments and relying more on percussion and silly or fun sensibility.

For me, one of the most fun tracks to work on was Maws of the Ruptured Heart. It might not be as in your face as some other ones, but it was a lot of fun to work on. It’s written as a bass flute solo, which is an instrument you should look up if you don’t know what it looks like. It’s massive and has such an amazing, unique sound. The soloist who we recorded is an expert at just about every kind of flute, and she came in with a lot of suggestions for additional techniques for playing the instrument. We ended up recording the piece as I wrote it and then just letting her go nuts. She would do things like growl in the back of her throat while playing a note, which made the flute sound alive, or hum the same note she was playing and then go slightly out of tune with the flute, so you would get these crazy, dissonant notes rubbing against each other. I ended up taking those pieces and manipulating them with effects to use as sonic textures in that piece and several others, so it was a very fruitful session for just one piece!

Looking back would you have done anything differently, with it being such a monumental project?

The only problem I have, and this is the problem I have with every Guild Wars soundtrack I’ve been a part of, is that I wish there was more music. Guild Wars is a game that you can spend a lot of time playing, and it’s easy to burn through all the music in a relatively short amount of time. In a perfect world, each game or batch of content would come out with two or three times as much music, but that’s just not feasible.

I will say that I had some wonderful collaborators on this project to help me bring the soundtrack to life. They are Stan LePard, who I’ve worked with for years both as a co-composer on occasion and orchestrator for every live recording we’ve done. He wrote four of the five pieces associated with the various mount creatures and did a terrific job. The others are Wilbert Roget II and Brendon Williams, who split the duties handling all the combat music. In a couple instances, I handed them a theme and they ran with it, but for the most part they just went nuts and did an incredible job. I love collaborating, since I think it makes the final product that much better, and these three gentlemen were about as good of collaborators as I could hope for.

If you want to hear the drums of war again or simply hear the songs of the desert then Path of Fire’s Digital soundtrack, it is available at Amazon or iTunes, while the stunning Vinyl version is available to preorder now.