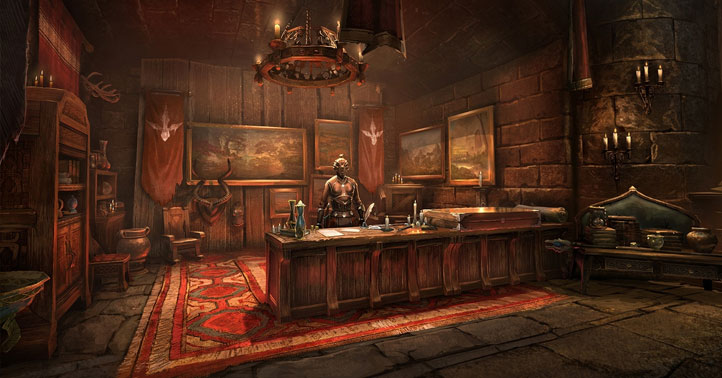 With the release of patch 1.6, there is a brand new justice system in ESO, or at least there is a portion of a justice system.  Now that all those sacks, barrels, crates, and other lootables are no longer yours to loot at whim, you may be wondering how the system works, and specifically where you can get some of the best loot.

To start, the random containers still contain many food items, worthless gear, and random low value crafting materials.  However, they may contain any of the stealable items available in the zone, which means that occasionally you find something of value by looking in them.  That, however, is a huge undertaking without much relative payoff.  Instead, let’s focus on how you can find items with high value regularly.

First, you can pick pockets to get items.  Generally, picking a pocket rewards a decent item worth 100 gold or more, although occasionally you get your 30 gold items here, too.  Still, odds are in your favor for a decent haul when you pick pockets.  However, starting off your success rates will be somewhat lower.  I’d suggest only trying to pickpocket easy targets when your success rate jumps at first, and only when you do not have many goods on you (because the guards will take these if they kill you or you pay your bounty to them.)  Still, picking a pocket or two to start isn’t a bad way to get a couple items when first hitting town, and even getting caught once or twice is a pretty small bounty.

The big money, however, came from strongboxes.  Finding them can be a little tricky, as they do have some random spawning habits, but there are certain rules you can follow to find them.  When you do, you generally get some direct coin, and at least 1 item worth 250 gold.  A few strong boxes a day can earn you 10,000 gold in a week easily, and checking them takes very little time.

Post the population surges from buy to play, and people figuring out strong boxes, you need some other tactics to make it rich.  Thus I proudly present weapon and armor racks as your alternative at higher levels.  These items will net you 30-60 gold average, and are found in large groups which makes a single point worth several hundred gold in many cases.  For lower levels, just go to places with a ton of crates, sacks, and barrels you can steal from… and pick up the theft specific items. 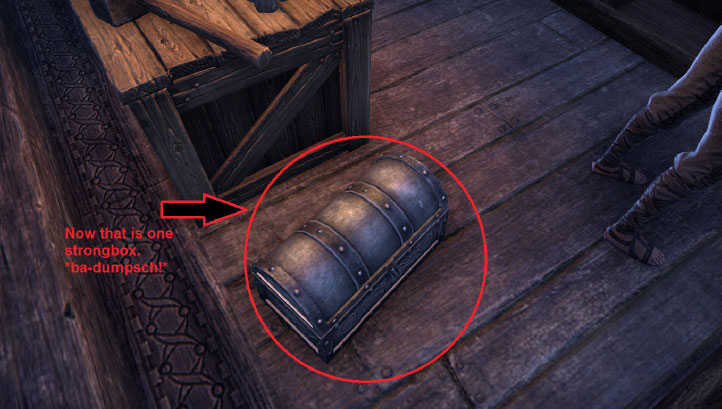 The rules to strongbox picking (should you care to hunt for them) are as follows:

First, to find them you must know where they can spawn.  Strongboxes can spawn at any inn, shop, or private home.  When searching, private homes are locked, so they will raise your ledgerdemain skill line, but they also take more time to enter and find what you are looking for, especially since the boxes are far rarer inside homes than inns and shops.  When you are at a shop or inn, search near counters or back corners to find the box.

However, as the population of the game has found stealing to be fun, the lockboxes in the stores and inns have become so over-farmed, that houses may well be a better bet! 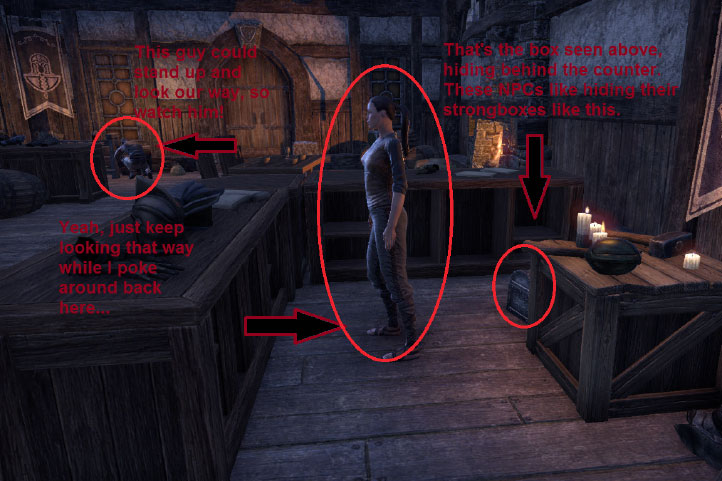 Second, observe.  There will be at least 1 NPC in the room.  Your task is to learn a little about how they move.  Most NPCs will have a few points they stop at randomly.  What you need is for none of them to be looking at you from relatively close, and for them all to have moved within the last 5 seconds.  This gives you enough time to pick the lock and loot the contents.  Alternatively, you can pick the lock and exit really swiftly, waiting for a second chance to loot what you have found.

Third, plan wisely.  You can almost guarantee that if you aren’t careful, the guards will notice you.  Thus, if you have a fair amount of loot on you, it is wise to go and turn it in before attempting to tackle some of the tougher strongboxes.  Even worse, most of these boxes are indoors.  If you get caught, you can’t step outside while in combat.

When you do find yourself dealing with the guards:

First, look to see if they have a grey hitbar rather than a red hitbar.  If they have this grey hitbar, you can’t kill them, so be extra cautious.  This covers most of the guards at this time, but there are still a few around that you can murder.  Just remember that this makes you even more wanted.

Second, if you are caught, you may flee or pay the bounty.  Waiting for 15 seconds automatically starts you fleeing.  This turns your bounty way up, and makes guards attack you for a while.  Guards take your stolen items, but fences will not when you pay them your bounty.

Third, bounty goes down over time, so you can do something else to let your bounty run down before you go back to town to deliver your goods.  Remember that some NPCs will not talk to you if your reputation is really bad, so if you are planning on going hunting for certain things out in the wilderness, save it until after you do any skullduggery.  This gives you that time to let things cool off, reducing any bounty you do pay to the guard or a fence.

Finally, you have options with your loot.  Some of it you will sell, but there may be some items that you want to keep for whatever reason.  These can be laundered, allowing you to keep the item.  This is also a quick way to help level your skill line with junk items.

In some cases, Guards and people can be distracted.  This requires either the use of a sacrificial pickpocketer who simply pays the penalty, or has some other means of engaging their attention.  It isn’t a 100% thing, but in some spots it really helps.

Friends who loot together can monitor movements for each other, and larger groups can have a designated lookout who is tipped by the parties that take the loot.

Combat inside prevents you from leaving, at least normally.  However, invisibility potions can give you the chance to escape outside from one of the overpowered guards.  To successfully escape, you will want something to purge yourself with (DOT damage disrupts the potion) and the potion ready to quaff.  Additional effects like a short stun can be helpful here.

Don’t go AFK on a patrol path with a bounty.  Guards hate paper towels.  You’ll die.  *My apologies for the bad pun.*