Rise & Shine: A Boy, a Quest, and a New Breed of Smart Weapon 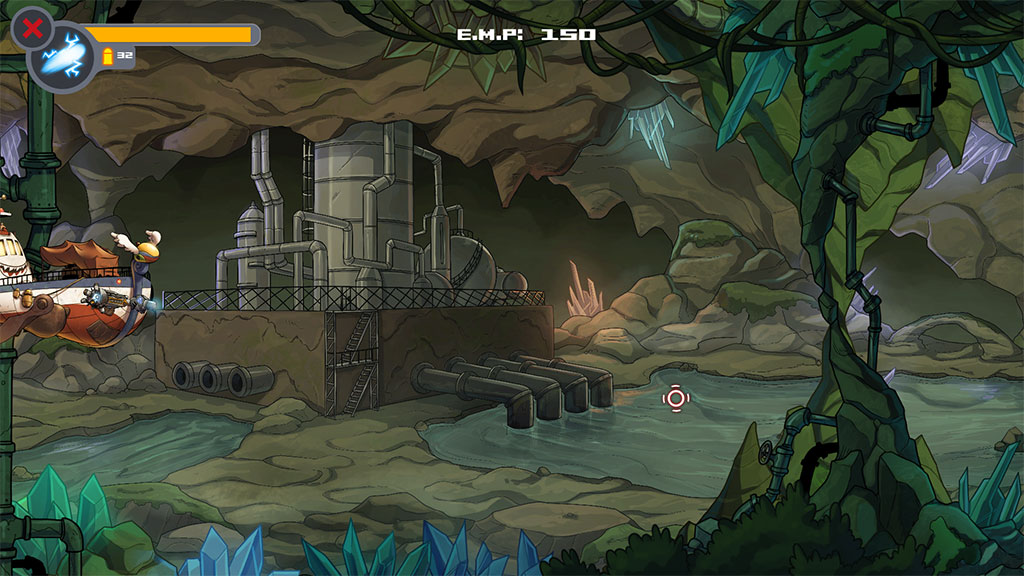 A boy, a quest, and a new breed of smart weapon

Super Awesome Hyper Dimensional Mega Team definitely cannot be labelled as a boring studio. Their small but unique catalogue already includes a cute, story driven bubble popping puzzler and Pro Zombie Soccer. Now, a new duo join the line up with the release of Rise & Shine. Published by Adult Swim Games and out now on Steam, this adventure aims for glory with a blend of personality, puzzles, and platforming that might just make it stand out amongst a myriad of other indie platformers.

This 2D side scroller follows Rise, a child of the planet Gamearth, as he is thrown into the midst of a brutal planetary invasion. Through a series of rather calamitous circumstances, that might send the best of us into therapy, Rise is paired with Shine, a weapon of legendary power and importance. Burdened by destiny, and with no responsible adult willing to relieve this unfortunate child of his fate, Rise & Shine takes the protagonist on a quest to find the King, use an ultimate weapon, and save Gamearth from certain doom.

On his way to find the King, Rise needs to survive an onslaught of space marauders, killer robots, mines, zombies, and the odd brain teaser. Early levels in Rise & Shine are a straightforward run and gun experience where players get to blow their way through some fairly untaxing enemies, avoiding the odd ledge, and getting to grips with the basic control systems. As with any side scrolling platformer the fundamentals of movement are instantly intuitive, and a thirty second tutorial covers the remaining combat mechanics. Keyboard and mouse controls are satisfyingly accurate, responsive, and suit the precision targeting required later on. Controller support, however, is not quite as sublime. After attempting to make use of the advertised controller support I found that analogue control sticks simply bludgeon the game’s aiming system, lacking the finesse of a mouse and turning the game into a frustrating mess as it progresses.

Precision quickly becomes paramount as Rise ventures further through the ruined cityscapes of Gamearth encountering an array of bigger, nastier, and more perplexing villains. Sporting bigger guns, more armour, smaller hit boxes, and a variety of phases, this flow of cannon fodder keeps progress interesting and forces players to utilize Shine’s expansive arsenal. Shine sports a number of options when blasting their way across the screen, which can be electrified, detonated, and even propelled around obstacles, allowing players to circumvent line of sight issues. 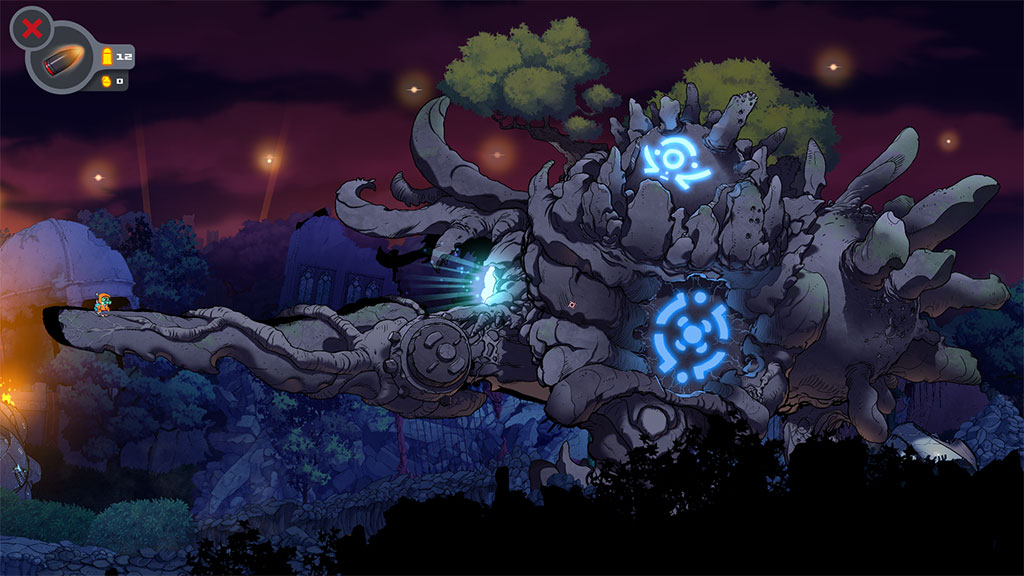 Although blowing away monsters is always an enjoyable romp, Rise & Shine’s puzzle elements are where it really excels. A variety of boss encounters and environmental head scratchers are dotted across the horizon, that require the right ordnance, some precise timing, and a steady trigger finger. A pattern of trial and error quickly develops that is only broken by victory or, more often, death. This is clearly intended as wielding Shine imbues Rise with infinite respawns, allowing players to dust off their mangled limbs and adapt. An abundance of save points also make death fairly inconsequential without undermining the challenge of each encounter.

The venue to this life and death skirmish begins in a rolling Gamearth skyline decorated in destruction and eventually ventures into a pleasing mix of other backdrops. The team at Super Awesome Hyper Dimensional Mega Team set out to illustrate entire levels rather than rehash library assets and the result is a setting so enthralling you might forget it is a war zone. The opening cityscape is incredibly detailed, with a stylised architecture that gives the crumbling metropolis its own distinct personality. Following levels are just as intricately illustrated and character models are equally impressive. The art team’s experience in traditional animation shines through in this endeavour. Everything from the game’s hero to the gargantuan killer robots are big, bright, and appear to have escaped from a bold comic book adventure. Rise & Shine is simply stunning to look at. 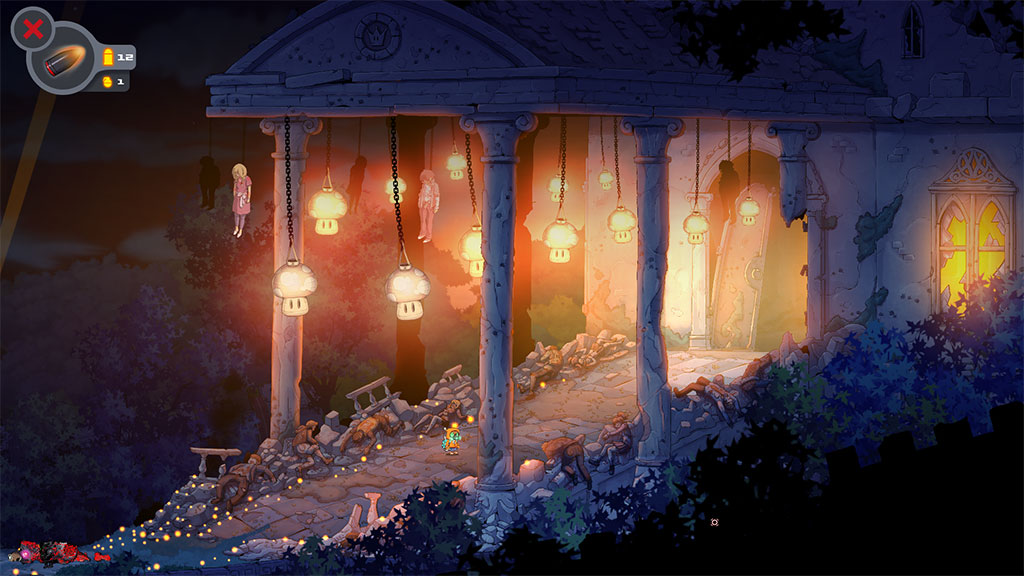 Visuals aside, Rise & Shine is not perfect. The entire world is utterly lathered in references to classic video game culture, making for some really fun moments. NPC island is a particularly inspired creation, taking an RPG trope and contorting it into an entire level filled with quirky mini games. Some of these, however, just do not wash. The game’s Legendary Warrior and King are obvious examples that just feel like an unnecessary intrusion on the game’s story. In fact, much of the game’s faults lie in the story telling. I had trouble with a largely perfunctory plot that sends a child out to die repeatedly with just a revolver and tried to simply hang a lamp on some serious logical inconsistencies.

Rise & Shine clearly never really sets out to be an epic tale. At three or four hours of gameplay, it has enough challenge to keep anybody interested for the duration and its mechanics manage to propel it above its rivals. It is my first must play game of 2017 and at $11.99 £10.99 on steam, you can absolutely afford to give it your time, too. 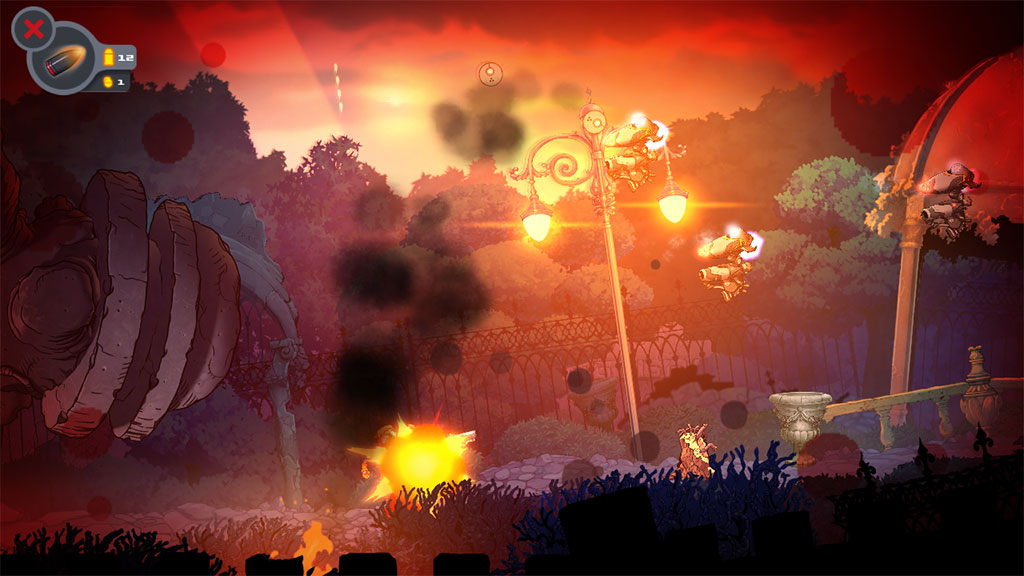