With the release of Elder Scrolls Online, ZeniMax and Bethesda Software will take Elder Scrolls enthusiasts into the realm of MMO’s and player versus player combat for the first time. This is exciting news in many ways, since the Elder Scrolls franchise has such a large number of fans worldwide. It will expose many of these fans to player vs player for the first time since previous releases have been first person shooters.

Many players that have previously experienced pvp will attest to the somewhat addicting nature of this style of play, while others may not have had such an enjoyable experience. Those that did not enjoy pvp previously may find that the ESO version will be a much more enjoyable experience. Many of the current MMO’s suffer from a very small landscape for battles allowing smaller groups of players little chance for significant gains before the dreaded zerg runs them over. ESO promises a huge battleground that will, from all reports, take as long as 30 minutes to run across on foot. This will permit smaller groups of player’s ample time to take a keep or outpost without the worry of being overrun by a vastly superior force.

ESO also promises missions that permit the solo player the opportunity to gain Alliance vs Alliance (AvA) experience, as well as, gold and loot. These missions will provide exciting opportunities that many other MMO’s ignore.

Part of the ESO AvA experience is centered on the taking of Castles or Keeps, and their associated resources such as outposts, lumber camps, mining camps and farms. Those familiar with previous MMO’s such as Dark Age of Camelot and Guild Wars 2 have experience with siege equipment and their use in MMO battles. Let’s take a look at how the ESO franchise envisions and executes siege warfare.

There have been several other games that have employed siege as one of the central foci of their pvp experience, most notably Dark Age of Camelot, and Guild Wars 2. Both of these games provided the option of several types of siege equipment. Elder Scrolls Online has a wide variety of siege equipment available to the player. 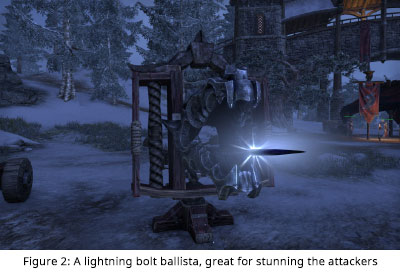 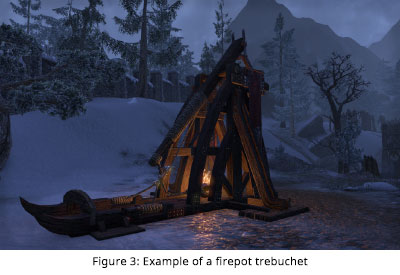 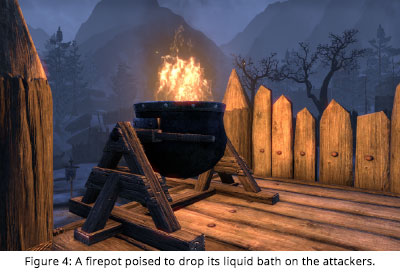 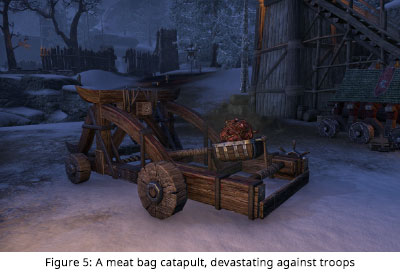 Several of these offer variations including stone projectiles, firepots, and lightning bolts, all of which provide unique damage capabilities. You can, for example, buy a stone trebuchet, a firepot trebuchet or a lightning blast trebuchet and equip them for use. Forward camps are a nice addition in ESO and provide the players with a remote respawn point. This can be a great advantage since running across the battleground on foot can take over 30 minutes from edge to edge. They are however limited to 25 player uses and then they disappear, unless repairs are performed.

In some other games the use of blueprints is required for the deployment of siege engines. This requires the player to have not only the blueprint, but the resources to build the equipment. This may require input from as many as 15 other players to build a trebuchet or golem. ESO does not require the use of blueprints to build, nor does it require supply to build siege, which is a welcome change. What ESO does require is that the player purchase the siege equipment from a vendor that is located in most keeps, and towers prior to the battle. They may be purchased using AvA credits or gold.

In real life situations, the siege that was left in a keep or castle could be used by the capturing force unless it was destroyed by the fleeing force. In many other AvA and PvP games siege is simply abandoned when you have completed the capture of an objective. This abandoned siege could not be used by the capturing force. In ESO this will not be the case. Players who place siege can retrieve it once it has served its purpose by stowing it until they need to place it in a new location for the next attack. Abandoned siege is a problem of the past. 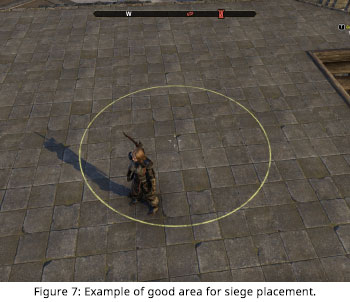 Siege equipment in ESO sustains a small amount of damage each time it is fired. Siege may be repaired by other players during the heat of battle, if they have the proper materials, or by the user if they leave the equipment first. This helps to extend the useful life of the siege. The high cost of repair materials does not always prove worthwhile, however, since repair materials are minimally effective. Sometimes it is cheaper to simply let the siege die, and place another.

Siege deployment is a bit cumbersome, but once you have done it a few times it is ok. In order to place siege you must first equip it in your hotkey function. 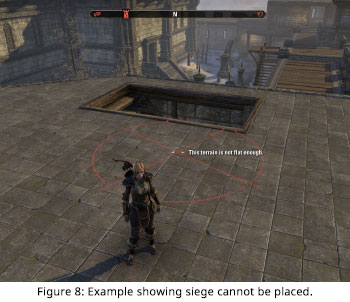 This “hotkey” allows you to have potions, repair materials and siege ready for quick deployment. After the items have been placed in an appropriate spot from the players inventory, the player presses and holds the “Q” key and uses the mouse to pre select the desired item. Once it has been pre selected in this manner, it is placed by simply pressing the “Q” key and moving your mouse pointer to the desired location on the ground. During the heat of battle this is cumbersome, until you train yourself in its mechanics.

The number and placement of siege equipment can play a central role in both the attack and defense of castles and keeps. There are limitations on the maximum number of siege engines that can be placed, but since the siege is easily moved this has not proven to be a problem during our testing.

Additionally, there are terrain limitations on the placement of siege, which make sense. You cannot, for example place siege on rocks, or too close to another piece of siege. Figure. 5 shows an example of the area necessary for siege placement that must be relatively flat. The circle will turn green when you find an area that will accept your siege equipment. Zenimax has done a good job of providing many places where siege can be placed inside and outside of objectives and should not pose a problem for either offensive or defensive players. 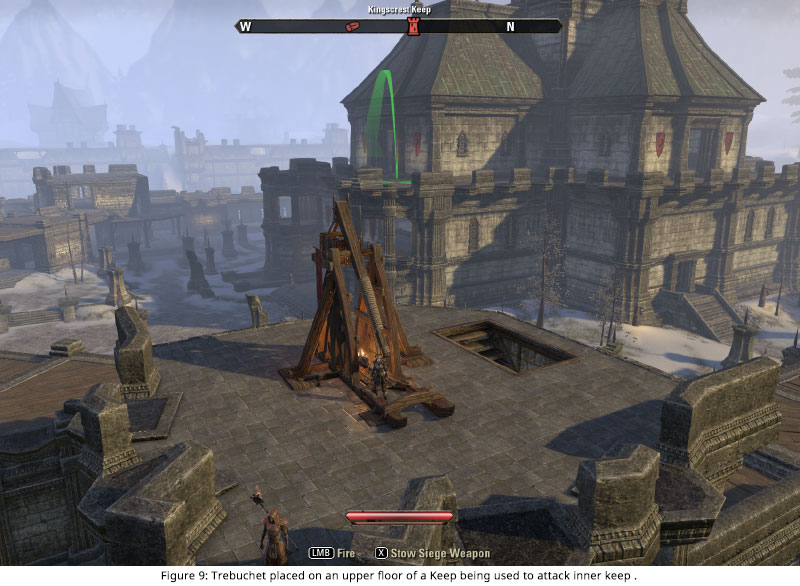 During testing I did not experience any problems with “collision” that is present in some other MMO’s. What happens in some games is that siege equipment can “penetrate hard surfaces” and still do damage to the player on the other side. Arrows shooting through castle walls and gates is a prime example that occurs in some games. Thankfully I did not encounter this trait in AvA testing in ESO as this was a most frustrating trait in other MMO’s.

Finally, I know during my research for this article that I found that many different types of siege engines were put into use during the medieval era. An example of a trebuchet accompanies this article. The way siege equipment looks is a big part of the implementation during the game design. You will find several examples of the siege in ESO accompanying this article. I think the designers and art department did a great job with making these seem like they are right at home on the ancient battlefields of Cyrodiil, and that only adds to the enjoyment.

ESO certainly promises to be many things to many players. For the devoted Elder Scrolls fan, it provides a glimpse into the past of Elder Scrolls. It provides the player new to the Elder Scrolls experience a polished high definition world, complete with magic, sorcery, epic creatures and yes even player vs player content. Siege engines in pvp is only one small aspect of the Elder Scrolls Online experience. We invite all of you to give AvA a try in ESO. We look forward to seeing you all in Cyrodiil very soon!