My son first brought this game to my attention as something that we could play co-op on our two evenings per week play together.

Grounded is an action-adventure game that can be played as a single gamer or online co-op for up to four persons, and was released as early access on 28th July 2020.

The game starts with you standing by an abandoned toolbox in a little hollow, and it only hits you how small you are when you venture towards the light and the first quest marker, with the grass seeming like it is ten feet tall.

On your way to the first quest you will see an enormous baseball on your left, which can be climbed on with the help of a convenient stick leaning against it. There are lots of highlighted things that you can pick up, ie: peblets (small pebbles), sap, sprouts and fibre, and these things will be the makings of your first tools and weapons. 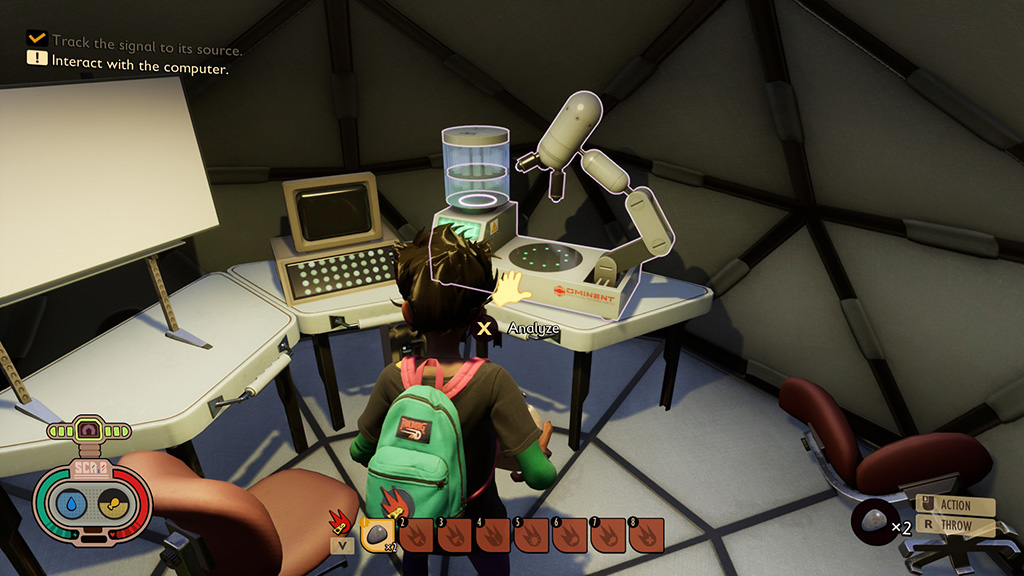 The first quest marker is at a field station where you can analyze the items you have picked up and will gain knowledge of what can be crafted from them. You will be able to analyse up to three items per half hour, game time, and will give you Raw Science, which I will explain later.

The first things you should craft are a pebblet axe, pebblet spear, a pebblet hammer and a torch for when it gets dark. With the axe you will be able to chop down clover and grass to gain grass planks and plant fibre. The fibre can be crafted into crude rope to help craft more items. 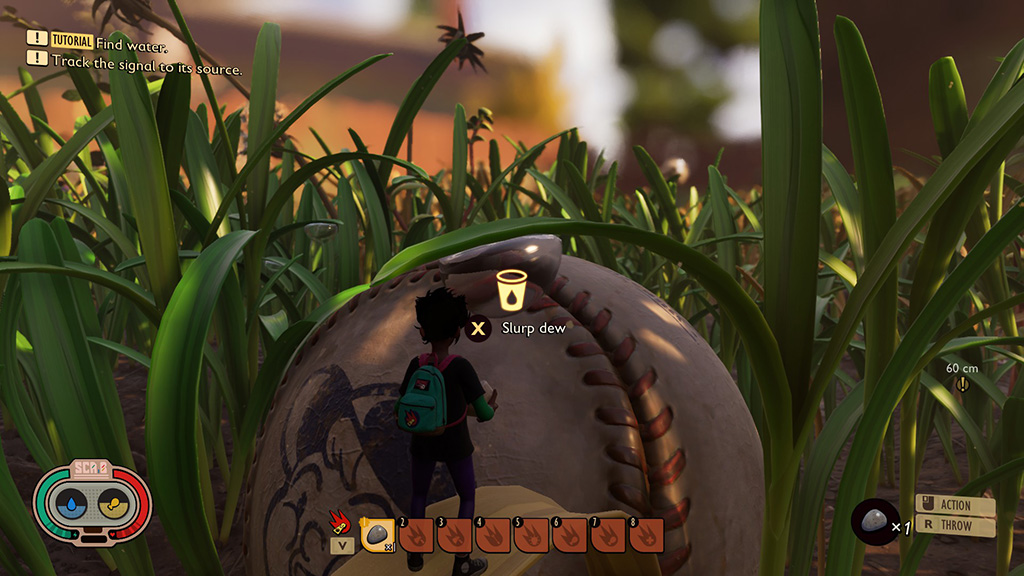 At the top left, the tutorial will tell you to find food and drink. Food is easy as there are quite a few mushrooms to eat, and you can also kill gnats and weevils etc., then cook them on a roasting spit. Clean water, at first, will be from dew drops on the tops of grass and throwing a pebblet at them will cause them to drop to be slurped.

A lean-to should be crafted early on as that is where you can sleep and set a respawn point. You can set up any number of lean-tos about, but building a base near an upturned juice carton (which there are quite a few) will give you regular drips of liquid to quench your thirst. This crude base, made from grass planks and weed stems, houses a lean-to, a spit and most importantly a workbench which is required for crafting better tools, weapons and armour. You will also be able to craft a dew catcher, which will provide at least four drops of dew to drink per day. 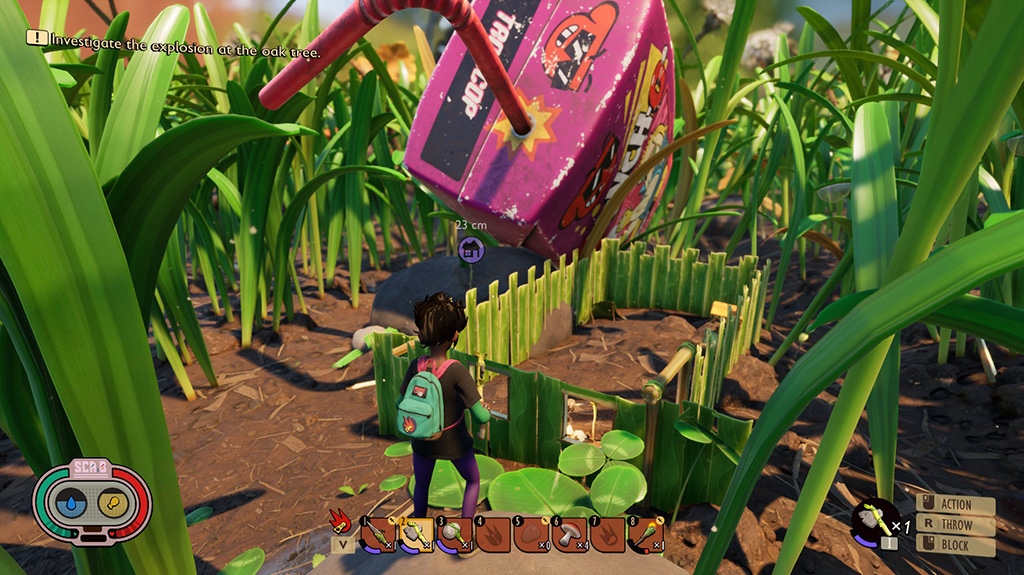 The map in the game is not too inspiring, but as you discover things you will be able to see the field stations etc on it, set trail markers where you have your bases, or other places where you need to revisit often.

In the following quest you will be told to investigate the Mysterious Machine, but nothing on it seems to work until you activate the flashing Target button. There are two puzzles to solve, and when you have solved why two beams are not hitting the contacts, you will then need to press the flashing Activate button to start a cut scene showing an explosion at a nearby oak tree. Your next quest will be to investigate the site of the explosion..

On the way to the big oak, the terrain is full of creatures bigger than yourself, which include gnats, aphids and weevils that are easy to kill and eat. Ants and Ladybugs are non edible and are quite mild mannered, until provoked, and then they will attack. When you see a mound of earth moving a hit with a weapon will reveal a Grub that will give you crafting items. The enemies that should be avoided at the beginning will be the Stink Bugs, Bombardier Beetles, Larvae and also the Orb Weaver and Wolf spiders, because they will attack on sight and kill you. On a recent update they have introduced Bees, Mosquitos and Fireflies. Bees and Fireflies will only attack if shot at with an arrow, but Mosquitos will attack on sight. For these creatures, good armour, weapons and a shield are a good idea as they hit hard.

When reaching the oak tree, you can go either clockwise, where you will need to stay higher and jump from roots to leaves avoiding the snoring spiders on the ground, or anticlockwise where you can stay on the ground for most of it, but it is a little longer distance. 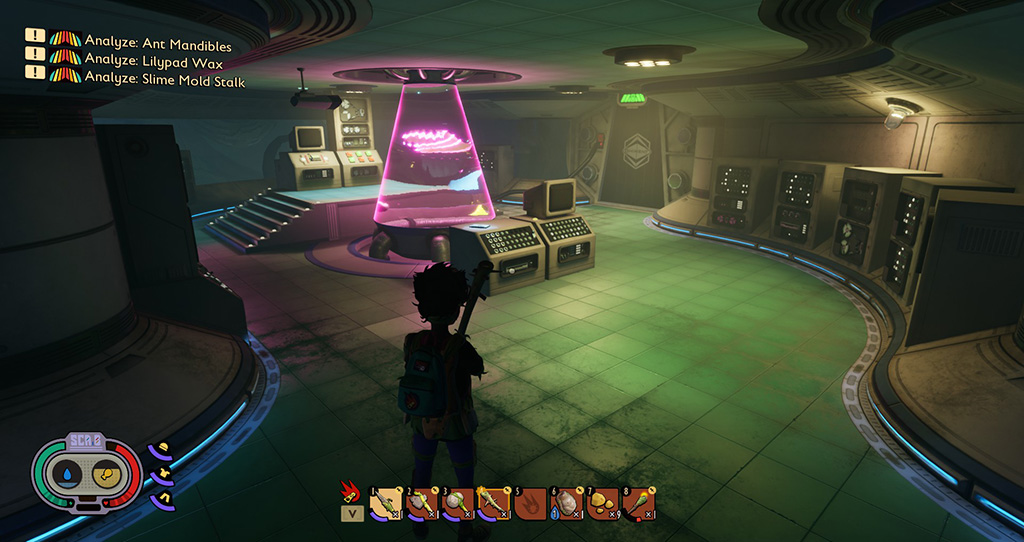 When you reach the entrance to the oak tree lab and have ventured down into it, the first room you see will be a brightly lit lab with various bits of equipment, a chip to be picked up and two locked doors. In the centre of the room there is a panel, where you can push the buttons in a sequence to light them all up. Beware, after you have done that, one of the doors opens and a rogue Burgl will appear and attack. Once you have defeated him you will then be able to venture further into the lab and meet the friendly Burgl who will chat with you, supply you with three quests a day and exchange any Raw Science you find into items that will help you to craft better armour and weapons.

The Raw Science I mentioned can sometimes be found in the open, under a grass stalk, but more often they are hidden or searched for via a Burgl quest and looks like a pink orb, which will disappear when you move onto it.

The map is not the best I have encountered, but at least there is a lot to explore on it, as well as areas where you can venture, but are still under construction and you will find nothing but grass at the moment. Each area has its own enemies to contend with, for example, dry areas will have mostly ground walking creatures, but in swamp areas you will encounter the flying creatures more often.

In the area where the weed killer spray is constantly creating a green fog, you will need to craft a gas mask as it is poisonous and you will not survive for long without it. Unfortunately, Infected Mites and Infected Weevils inhabit these areas as well and will jump out and attack you as you walk by them.

There is also the Koi pond area where you encounter Tadpoles and Water Boatmen, who are mild-mannered, but also beware of Water Fleas and Diving Bell Spiders, who will attack on sight. The foe to stay clear of are the Koi fish as they will eat and kill you if you get too close to them. It is a good idea to craft a breathing tube to start with, which can be refreshed from air bubbles escaping from underwater filtration hoses. 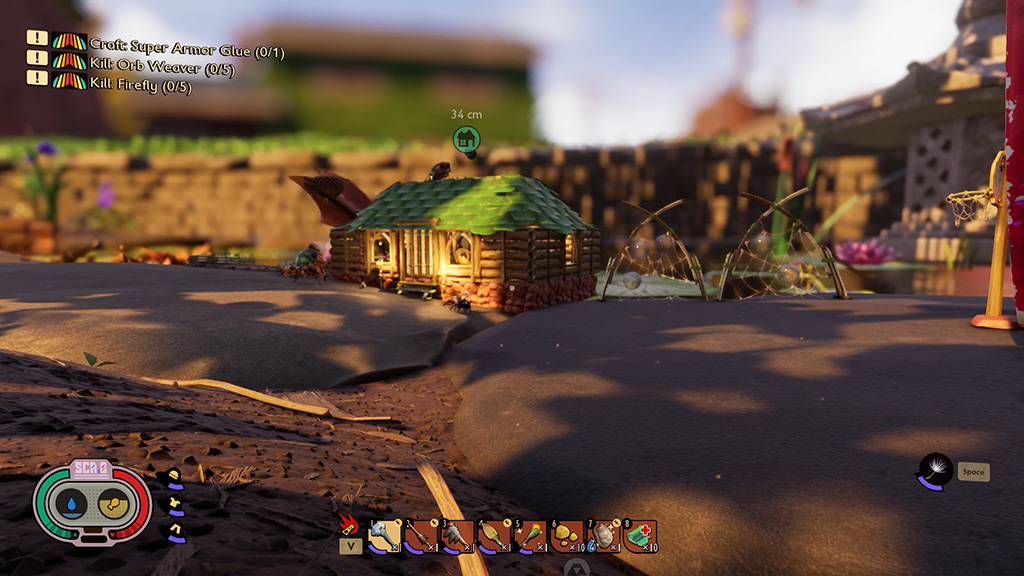 As you progress with the game you will find items or kill creatures that you will be able to analyze the parts you harvest and craft better weapons and armour, which will enable you to build better bases and explore for longer without being defeated by stronger insects and spiders. A nice area to build a base is by the side of the Koi pond, which is nearer to the oak lab and obtaining your three quests a day from Burgl.

I am enjoying playing this game very much and will be looking forward to more areas opening up and future updates to test my ability, armour and weapons to the max.

The world is a vast, beautiful and dangerous place – especially when you have been shrunk to the size of an ant. Explore, build and survive together in this first person, multiplayer, survival-adventure. Can you thrive alongside the hordes of giant insects, fighting to survive the perils of the backyard?