Back in my day things weren’t so different. The Epoch Barcode Battler is my earliest memory of the smart toys market, a section of the video game market worth billions of dollars every year, according to Juniper Research. True, the graphics were binary, the gameplay was chronically repetitive, and decapitation of supermarket cereal boxes was a real threat, but technology has moved on tremendously and now a close knit indie team, based in the north of the UK, is bringing a little bit of their own 90s nostalgia to the market with the launch of Swapbots. 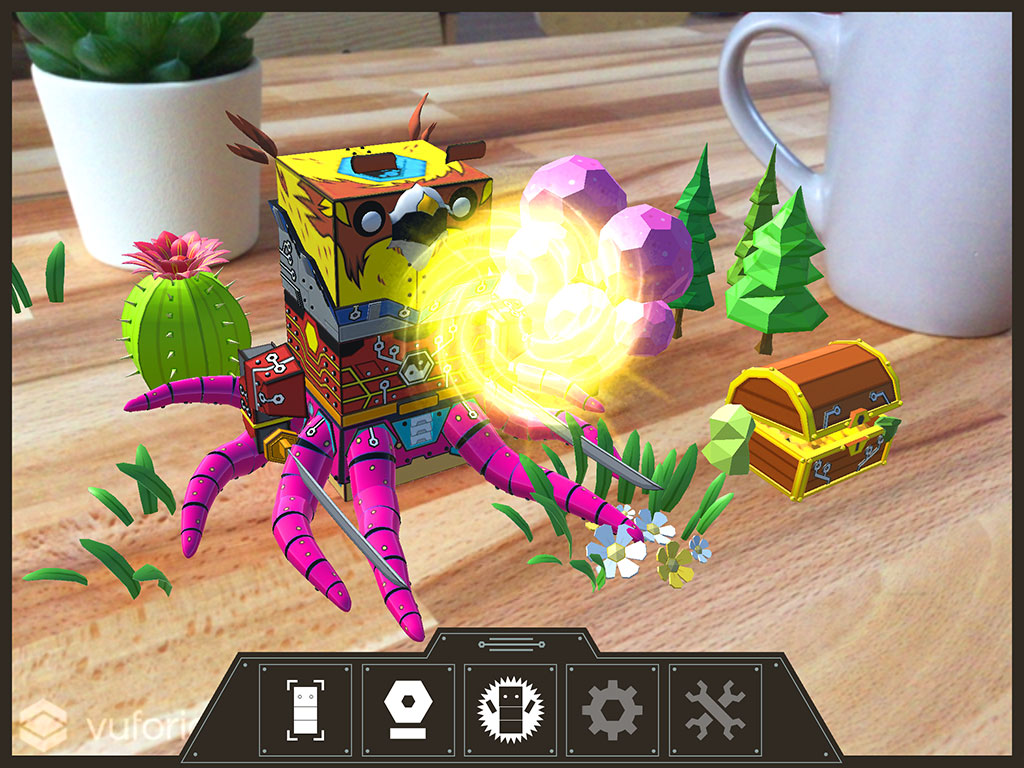 We had the opportunity to speak to Andy, one of the founders of Draw and Code, the team behind Swapbots, about their inspiration.

“So we've been working on Swapbots for just over a year now. And if I'm to be honest Swapbots has been bubbling around for awhile. Just under three years as an idea. As a team we were talking about how Swapbots, as a concept, could be something that combines the joy and magic of augmented reality with the fun of playing games. We were talking about childhood games, and story books, and kids being able to play with augmented reality so it's more than just a novelty. It's something that actually enriches the experience and gives them something really exciting. And it's not just like it’s one moment. You go to school. You give it. You seem to keep coming back to it and it provides just as much fun and challenge every time. One of the things that we talked about was the first germ of of an idea around two players and this little robot character made up of little blocks.”

Those blocks became Swapbots, a fusion of physical product and augmented reality aimed at reproducing the extended experience of the major toys-to-life franchises without the shackles of a home console. On their own, these toys might appear to be fancy colored Lego, but just like the Barcode Battler handheld, when combined with their companion app they really come to life. An augmented reality app, for both Apple and Android devices, allows players to dive into the Swapbots world or add a new layer to our own.

It’s a concept that seems to borrow elements from a range of toys, old and new. Swapbots draws parallels with the recent success of Pokemon Go, more traditional toys-to-life franchises, and even good old Top Trumps, as Andy pointed out.

“Some of the stuff that we really loved inspired us into making Swapbots, like Top Trumps and arcade games. It was just fun trading stickers and cards and toys when we were kids in a playground. So we created the idea of swapping these little robots that came to life. What if we broke them up into their different pieces so the blocks that have been cut change their function with the different parts you use.”

Delivering a collection of nine bots into children’s pockets, these collectable cubes stack together to make a range of neon minions. A single Swapbot is the combination of three cubes which can be rearranged in any imaginable order. From Griff the griffon to Kubuto the samurai, there are 729 possible characters for players to use. Wings, weapons, and tentacles all sprout from the Swapbots when placed in front of a smartphone camera, running the companion app. As players collect, build, battle, and play they can earn game currency, called bolts, from all of the app’s game modes, be it battling other botters, campaign modes, or even completing minigames in the companion app.

“We've developed a lot of mini games for the app because we felt that the initial emphasis was on battling Swapbots. Since then we've developed a lot of fun minigames, for example a bug busters game where you have to stop these little robot bugs stealing your hard earned bolts. There's this one that you can play on your own or with other players. There are various battles you can complete with or without the Swapbots to customize your different accessories. So, when you play a single player or multiplayer, all those stats that you collect as a character will have an impact on your game play both offensively and defensively. And the more you play the more you can upgrade them.” 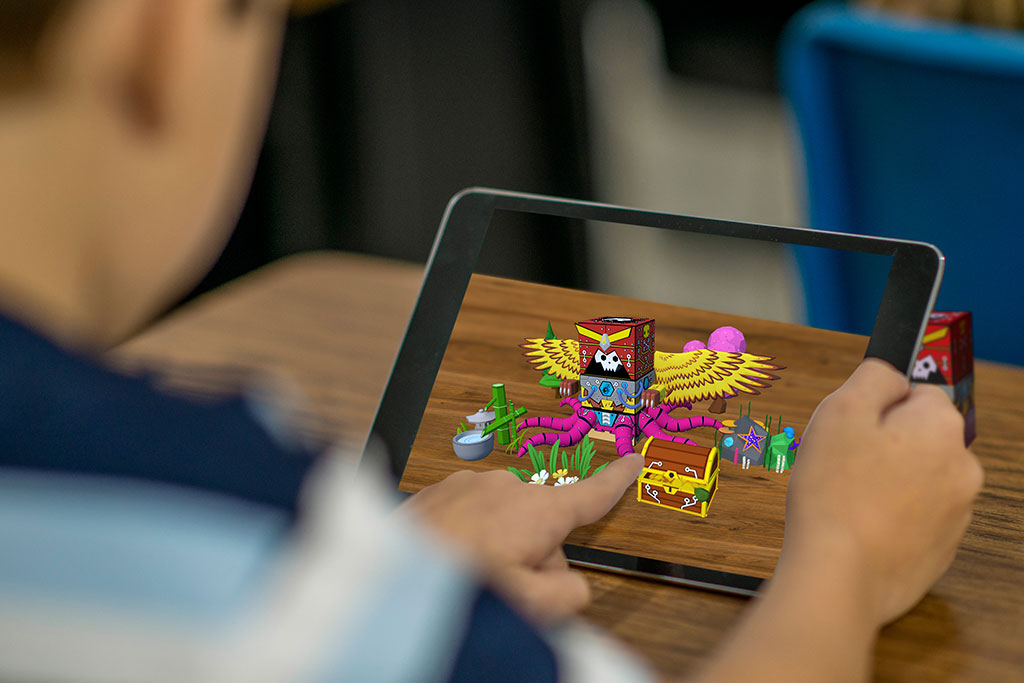 With the ubiquity of the smartphone and tablet, as well as the flexibility it provides, Draw and Code seems to have settled on a hole in the market. With so many children using a smart device, Draw and Code has priced Swapbots directly for this target market. The bots will come in at around £5/$8 depending on pack sizes with absolutely no in-app purchases. All game currency is earned in the Swapbots app. Andy gave us a bit more insight into this decision when we spoke earlier today

“We're all big fans of the toys-to-life arena as it is. We like the beautiful characters and feel like a lot of the games that have been made are really awesome. We kind of feel like there was this hole in the mobile toy market where we could slot in. When Pokemon Go launched everybody loved playing that and the use of augmented reality but there's no representation of that on the shelves really. Everybody could play Pokemon Go and it became so popular because it was free. You just wander around your street and play it. That's what it felt like and that's why the community was so fun to be a part of.

We feel similarly that we want something that you don't need to sit down and talk about how expensive this is going to be and this has to be a big Christmas present or birthday present. It can be something that the kids can buy with their own pocket money or the parents don't feel like it's something expensive. They're not worried by it. The stuff that really frustrated us were the the kind of purchases in other games, the credit card having to be put in there, and the advertising kids have to watch. All that stuff. I mean we were really keen to to make something and coming up with this idea of this swappable toy and video game. It was very transparent for parents and kids so it was very much like if you get this toy you're buying." 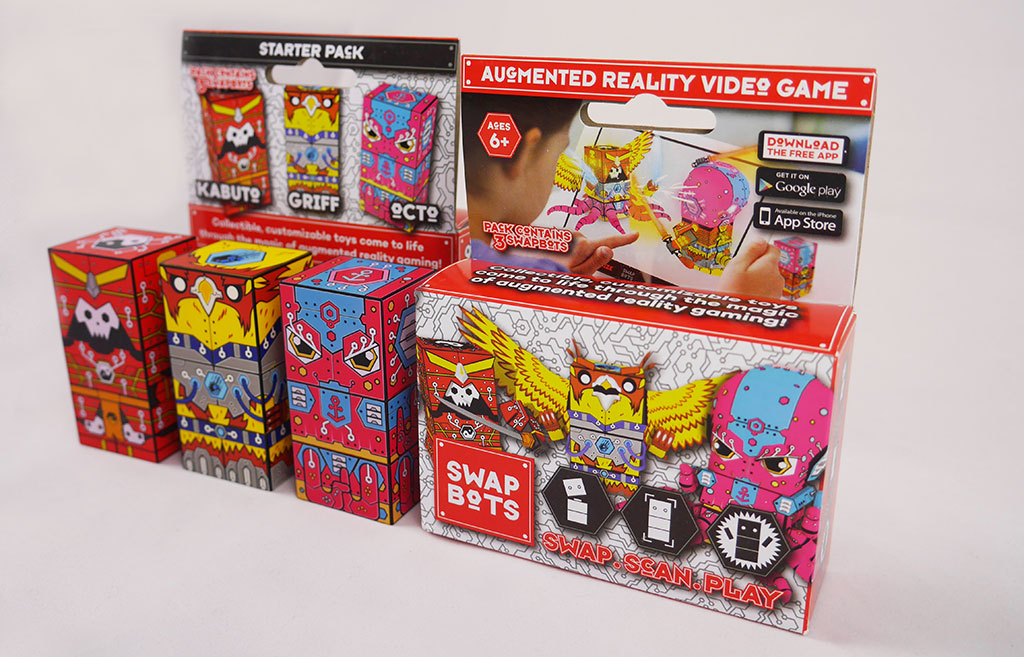 While it might be financially safer to develop Swapbots and hand it off to a big toy company, Draw and Code are bringing their idea to Kickstarter. We asked Andy why they wanted to use Kickstarter rather than pass the idea onto a major global brand.

"We were really excited about producing Swapbots as an independent and being able to drive the creativity and passion through from where we were to where we are now to finally getting it on the shelves. We've been able to talk to some really exciting people. We’ve made some really great partnerships without having to have a big toy manufacturer looking after Swapbots. We partnered with Vuforia, who provide the augmented reality platform, and we’ve partnered with Unity as well,  and they are really excited about the fact that we're making this and that we're independent in this space and that doesn't happen very often. So, we're really excited  to take our dream and our crazy idea out to the wider gaming community. We all support amazing Kickstarter ideas and we wanted to open it up to that community of people that I love supporting a really passionate innovative fun silly ideas and help it get to fruition.”

If you have a soft spot for Top Trumps, Pokemon Go, and the legendary Barcode Battler then you might want to head over to Kickstarter and have a look at Swapbots.