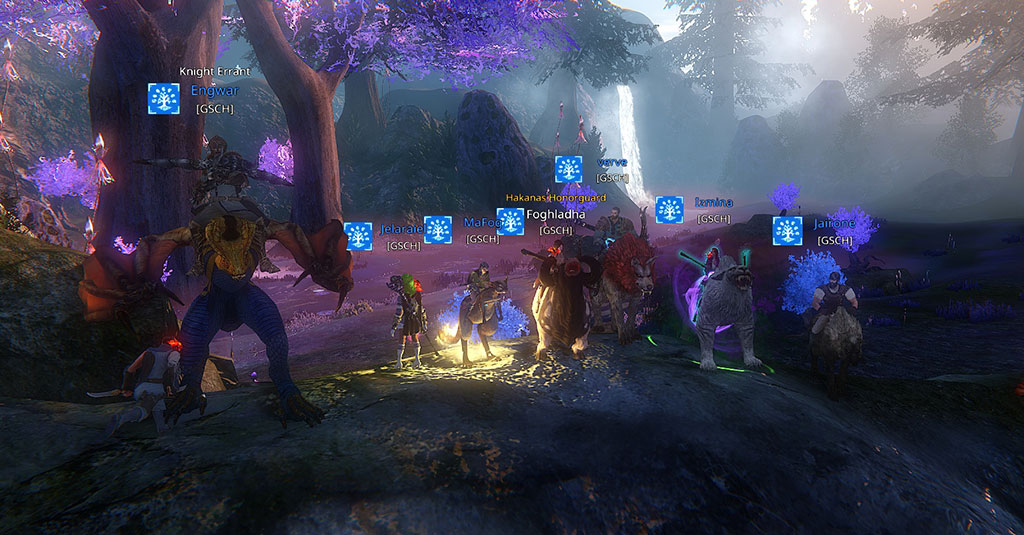 There is an unseen plague developing in the MMO industry today. One that is being pitched as a feature, yet is making a very big shift in player mentality. This shift turns old allies into enemies, friends into forgotten. If left unchecked this trend will prevent the new generation from experiencing games the way their parents did.

Many major MMO titles are now limiting guilds and clans to under 100 players, some as low as 20. While their messaging will speak of creating fairness in guilds, balancing content, and preventing mega-zerg guilds from existing, the truth is that the real people who will suffer, are the grown adults who grew up paying a monthly subscription to play back when communities were embraced, not punished.

As a father, a manager of a small team of programmers, and as a guild leader, time is something I once possessed. It is a currency that any working adult is constantly lacking. For those of us who used to play Dark Age of Camelot, Ultima Online, Everquest, or Runescape, we can no longer spend 8+ hours a day playing games. Instead, we are left with bite sized playtimes that have to be scheduled around our day to day life.

This is a demographic that is at risk of disappearing from modern MMO's. The casual gamer has an increasingly difficult time finding a guild that will offer them one of their precious few spots. It simply isn't feasible to have 1 of the 100 spots in the roster filled by someone that doesn't play every day.

In 2016 the Electronic Software Association reported in their annual “Sales, Demographic, and Usage Data” report[1] that the industry average player actually spends just “6.5 hours per week” with a majority of players being over the age of 35.

Another industry metrics giant SuperData reports that the average MMO player is 33 years of age and plays less than 10 hours per week.[2]

From our internal research about playtime within the Gaiscioch Community’s player base, we found that the average age of our members was 41 years age and the majority of our membership were working parents that typically spent less than 12 hours a week playing video games. [3]

This places the majority of the gamers available on the market, as working parents with tight schedules and life responsibilities. 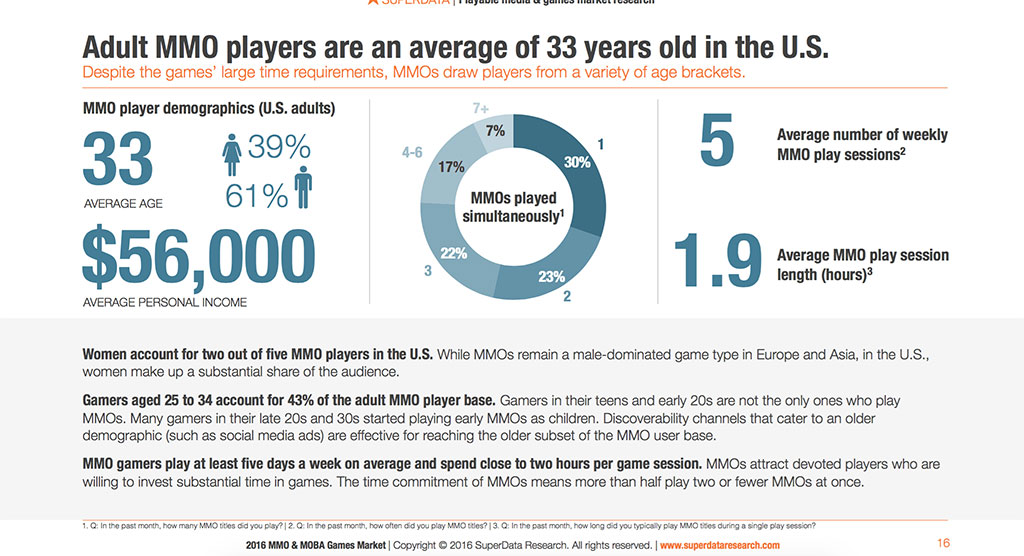 As a baseline example we will base our numbers off the poll of Gaiscioch players which is generous compared to the industry averages noted by the ESA and SuperData.

For the purposes of our example we will take a standard 100 person guild from Black Desert Online.

If 50% of the 100 guild members were spread evenly between each type of gamer you would end up with:

With a community that only played during the hours of 3PM to 11PM you’d have roughly 50 players that would be regularly on during those hours and another 50 that would be on for 2 hour periods within those hours leaving about 13 casual players on at any time during that period. So your regular roster would look like 63 people average online during your guilds playtime. Good, right?

But what happens when your community grows beyond the single timezone? Let's take a look at a global community that plays across all 24 hours of the day instead of 8. With a 20% coverage, you would be left with an average of 20 people online at any given time.

20 People isn't that bad right? But what happens when the game, for example Black Desert, makes it so you can't play with people more than 5 levels either way of you and there's a total of 50 levels. If the hard core group rushed to the top that would make 10 of those people level 50+, while the casuals would be spread across all of the levels. So 10 different buckets of eligibility, those other 50 players will have a total of 10 people in the 100 person guild that are their level. Now spread that across 24 hours, and guess what? You're alone with nobody to play with.

It's easy for game developers to assume that a 100% guild all plays at the same time, but from a diverse communities perspective that includes over 500 active players spanning 67 nations. A game that has a 100 player cap simply doesn't allow players to be casual and still enjoy the experience. Most guilds in Black Desert require an activity level to keep membership. Most casual gamers can't find guilds to be a part of because they're considered wasted seats in a roster.

This in turn prevents, the casual many, the ones who paid to play MMO's in the days of old, the ones who have money to spend on games, the ones who remember the community spirit that many guilds shared, from being able to share that feeling again.

Guilds like Gaiscioch who have a 75% casual playerbase, who were built from players that were outcasted from other guilds for not playing enough, are in serious danger of either sacrificing everything they stand for, or fading into the history books as "that guild that you were once apart of, that took you in even though you couldn't play every day."

This is a serious threat to the social nature of MMO's, and if left unchecked will ensure that the psychological standpoint of our younger generation is to cut out those who can't commit 8 hours a day to play. Forcing my generation to say farewell to MMO's and leave the fond memories in the history books.

We play MMO's to play with others. When your game starts preventing people from playing with others, it can no longer call itself a MMO.

Will Gaiscioch survive this epidemic? Nobody knows. But one thing is for certain, unless games start making a change, the casual gamer will be extinct. Left with a feeling of being unwanted, unaccepted, and isolated, they will be left with no choice to look elsewhere for kinship.

In my personal opinion, this is why games like Everquest, Dark Age of Camelot, World of Warcraft and Ultima Online are still online today. Community is a powerful thing and with the right people, a community makes a game playing experience and a lasting memory.

Today's MMOs have a flashfire audience. Look at Aion, ArcheAge, Black Desert, Skyforge, and Blade and Soul. All of which released with small guild sizes, all of which lost the majority of their players in the first few months. The longevity of players is directly correlated with their ability to enjoy the game and find a place within the world. By making your games anti-social, you cripple its potential to succeed.

For a guild to succeed it needs a healthy player base for players to join others for adventures. When creating a guild size limit, please take into consideration that your player population will be divided into:

A diverse audience will take a full 100 person guild and turn it into a handful of people with nobody their level to play with. All game companies should try to create an environment where all players feel they belong, and all players are welcome. This would in turn support the longevity and health of the game. 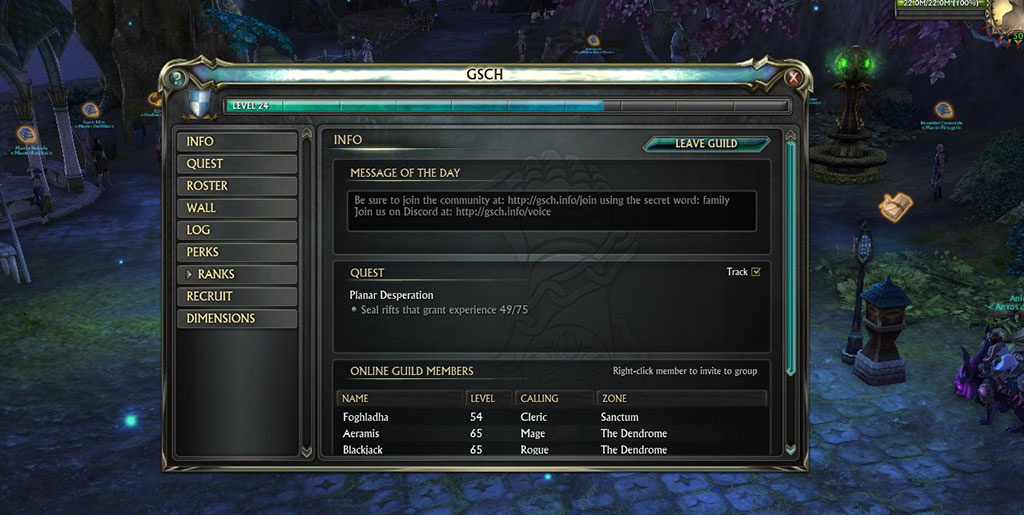 Over the past 4 years we've seen a major movement to shrink guild sizes. Let's take a brief look at a few of the games limited guilds to less than 100 players at launch.

What do all these games have in common? They all experienced massive reduction in player base shortly after launch. Could it be that players would rather not play a game that doesn't allow casual players to belong? Now let's compare that to titles that don't limit guilds to less than 100 players:

All of these titles have crossed the 5 year mark, some even the decade mark. All of them are still profitable and active.

If you provide an environment the majority of players can feel welcome and needed, it will create a better environment for your game. Take some time to analyse your data on how players are using your game. Look at the demographics of your player base and watch the average playtime of your player. If your demographic is under 35 years of age, you are missing out on the majority of the players available. Statistics and demographics are essential to your success and understanding the player base is absolutely imperative to the longevity of your title.

I ask every game developer to please, think about the single mom that wants to throw herself into a game for an hour or two after the kids go to bed. Shouldn't she have a place to feel welcome and needed? These are the Heroes we need in games.