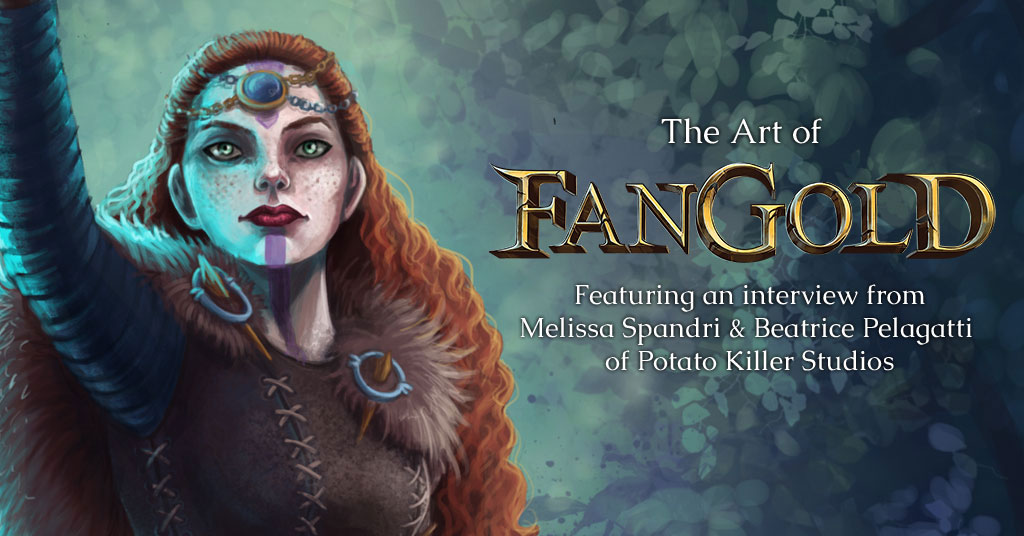 Today we are interviewing Melissa Spandri (M.), Lead 2D Artist and Beatrice Pelagatti (B.), 2D Artist, of Potato Killer Studios (PKS), about the artwork involved. PKS will have an early access of Fangold: The Eventful Adventures of Land of Britain in Q2 2017. The game is a multi-platform free to play digital card game with MMO style adventures to help you acquire items and craft new cards for your deck. You can even decorate your own tavern for a place to relax after battling other players in the card game.

First tell us a little about yourself, how you became interested in art and what led you to join PKS.

B: Drawing has always been part of my life, since I was a child pencils and pastels were my favorite play, but I remember the day when something changed: I was around my 20s and a videogame/fantasy addicted girl, working as a shop assistant in a book store. I had just started to doodle again, after a year of doubts about my life path. One day I was browsing a collective book of fantasy artists, before putting it back on the shelf, when I understood that there were people out there that draw and paint for a living and that it is a proper job. My dream job! Then I moved to another city, started an Illustration class and there I met Melissa. We became close friends during the school years. I remember one of our teachers saying that the relationships that we were building, could become the start of great collaboration and he was right! She actually led me to PKS. Our friendship and sharing the same passion push us to grow and work harder every day.

M: Yes, I'm the Lead Artist and started working at PKS after being contacted by another artist via Facebook. The project was at its very first steps and PKS was a small group of people from many Italian cities. When the studio started to grow and needed more artists, I brought Beatrice aboard. And many other artists followed.
As for my passion for art, well, it is something strong that I have had since I was a child. I studied architecture in high school and then I took the path of Comics and Illustration, at the same school where I met Beatrice.

I know several steps occur to get an idea through concept and into a 3D format. I have seen PKS share both 2D and 3D art through social media. Can you elaborate on the process that PKS uses?

B: Our process is made of three basic steps: first of all the writes put down in words their ideas. We have a strong lore behind our products and the "roots" for any concept are connected to it. Then they add practical information about the details and features to give us a base to work on.

M: When the written concept comes to our department, the artist assigned to it, produces many rough and quick sketches. Then I choose the best one and he/she defines it, doing all the studies that it requires. We usually provide at least a front, back and side drawing.
After the concept art is ready we send it to the 3D department that proceeds with the digital sculpture and texture, to get the final model.

When creating an idea, do you use a mix of traditional mediums and digital or do some of you prefer to go fully digital?

M:  We work both with traditional mediums and digital ones. I often sketch with real pencil and then transfer the line art onto the computer for the coloring phase.

B: Me too, especially when I come to draw for an illustration for a card or a banner, I prefer to feel the paper and the pencil under my hand. While others prefer to draw directly with digital supports.
What has been the biggest hurdle in getting an idea through the process?

M: To me the most important and hard thing to do is to keep a balance between the personal view of a single artist - 2D or 3D, we all put a piece of ourselves in what we do - and a visual unification for the whole project. It's beautiful that we add a personal touch to the final result, but we have to keep in mind that the design needs a strong identity to be recognized everywhere.

B: Since we are an indie and don't have a physical office yet, working from home with 20 other people, can be something big to deal with. We have a weekly online-meeting with all the team, then, during the rest of the week, we keep in contact with the people involved in the asset we are developing.  It isn't always easy, believe me! - laugh-

Has any design come as a surprise in how well or quickly it was produced?

*Melissa and Beatrice look at each other smiling*

B: They are like children for us, so it's a hard question.  Almost all of them were happy surprises in a way or another, and when a design doesn't make us happy, we usually keep working on it, until we are.

Was there anything which really challenged you because of the origin of material here? Maybe some aspect of the legends which was outside your normal art set?

M: I found those challenges interesting. Since we are a team of five artists, we have to do many different things and there is so much to learn when you have the chance to get out of your comfort zone!

B: Yes, indeed! And I like that the lore is rich of legends from the European folklore and influenced from many different cultures. It can be challenging to put them together and design things that don't seem matched by a clown, but it is in that moment that we can create something new.

On the topic of the legends involved with Britain, was there a particular influence for design from classical works?

M: Not a single one indeed. As Beatrice said, our lore is based on a mix of cultural influences. This applies to anything we design. We usually take inspiration to those real cultures and their typical designs involving classical art and architecture, fashion and handcraft. Then we make a step further mixing them with our imagination.

What is your favorite work done so far? Can you share it with us, or is it part of something PKS plans to save for game launch surprise?

B: I particularly enjoyed drawing a series of portraits for some of Fangold's cards. They all have classical composition, but the subjects are creepy fairy characters from the game setting. Also I really like to study and sketch a character's concept and equipment.

M: My favorites are the character designs of the 9 playable characters. It's something that I've never done before and it was great to have the chance to test me on them!
I want to thank you for taking the time to share with us about the art of Fangold. Are there any parting words that you have for our members and readers?

B: We are all professional artists, writers, sculptors, graphics, programmer, game-designers and so on, but first of all, our team is made mostly by gamers, in fact, many of us started doing our jobs just because we wanted to create something we've always dreamt to play at.

We are very grateful to be on this journey together and to have this chance to create our own game, hoping that people like us can have fun with it and, maybe, find inspiration to believe in their dreams and work hard to make them happen, as we are doing right now.

To find out more about Fangold: The Eventful Adventures in Land of Britain go to https://fangold.potatokillerstudios.com.