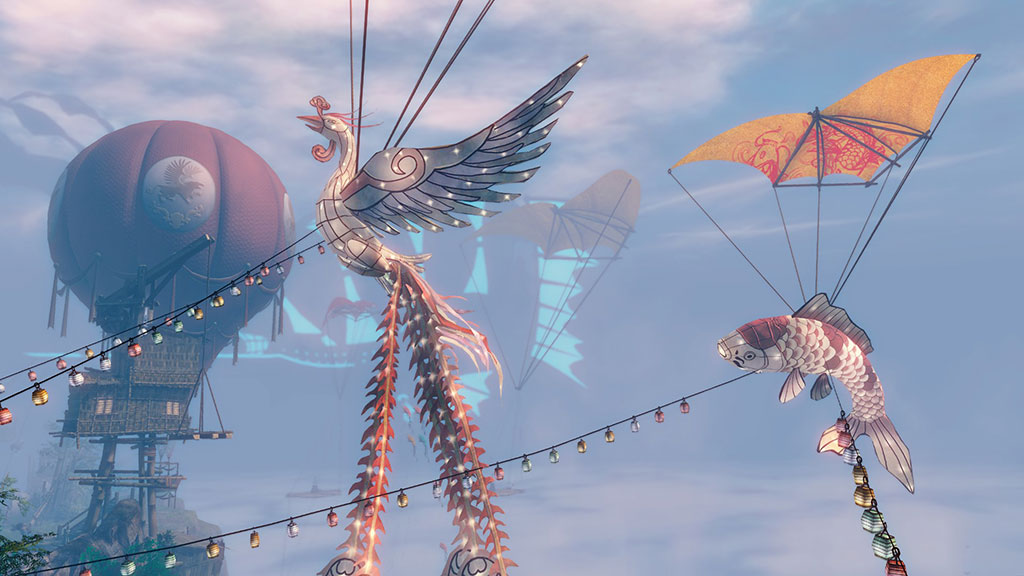 In the closing moments of the latest Living World episode, we reached a natural pause in the battle to save us all from imminent destruction. The struggle to defeat Elder Dragons, banish false kings, and save the world from immoral immortals seems unrelenting. Thankfully we appear to have a little respite from this onslaught and a more festive moment has arrived in Tyria. Today, ArenaNet announced the return of the Festival of the Four Winds to Guild Wars 2.

The original Festival of the Four Winds might even elude some of the game’s newer players. Originally a temporary content update back in 2014, it brought a whole host of activities, rewards, fun, and frivolous distractions at a time when Tyria was a much brighter place. Now ArenaNet invites players to return to Labyrinth Cliffs to take on challenges old and new.

As an added bonus, the Crown Pavilion in Divinity’s Reach has reopened, showcasing challenges against some of humanity's greatest foes. If you never got the chance to tackle Boom Boom Baines the first round or just want to be the fastest Asura around Sanctum Sprint, then Festival of the Four Winds is returns July 24th.

We had a chance to chat to Joe Kimmes and Matthew Medina from ArenaNet about the return of the Zephyrites.

Why bring back Festival of the Four Winds in particular?

Joe Kimmes, Team Lead: Looking at our current yearly festivals, we had a large gap across the summer months. There’s been interest for a long time in filling that hole in the schedule, and Festival of the Four Winds was the natural choice. It has a variety of activities for different types of player, and the individual components of the festival have reoccurred before, showing that it has the depth to repeat yearly.

Matthew Medina, Designer: As the team looked at adding a summer festival to our annual rotation of festival events, it seemed like the perfect opportunity to return to one of our most beloved “summer playgrounds”: The Festival of the Four Winds.

What new challenges are we going to see with the return of the Bazaar?

Joe Kimmes, Team Lead: I see the Bazaar and Labyrinthine Cliffs as being all about movement and exploration. We’ve added multiple adventures, races and scavenger hunts to the zone for players who want to climb around the vertical space, as well as a new meta event modelled on Amnoon’s Casino Blitz.

Matthew Medina, Designer: There are a number of new activities, adventures, events and exploration challenges throughout the festival.

Guild Wars 2 tech has moved on significantly since we last saw the Zephyrites. Did this pose particular challenges with the new and old content?

Joe Kimmes, Team Lead: A large portion of our work on Festival of the Four Winds has been to bring the old content up to modern standards, as well as fixing bugs that have built up over time. In the Crown Pavilion, for example, one of our programmers rebuilt the Queen’s Gauntlet queue system almost from scratch due to engine optimizations that had unknowingly broken it while the content was shelved.

Some things worked out more easily than expected, however – we changed Labyrinthine Cliffs to allow mounts and gliders, and since the freedom of movement in that zone was already very high, it didn’t need as many fixes as some other maps have required to accommodate the highly mobile mounts.

Matthew Medina, Designer: Yes, as a matter of fact we did have some challenges adapting the Aspect skills to play nicely with mounts (we ended up re-building them), but it was also a boon to us because we were able to modernize a lot of the scripts and technology that was years out of date, such as those for certain events, but we were also able to add new types of content to the map that didn’t exist before.

Tyria has moved on just as much. Glint is dead, The Master of Peace is no longer around, and the Zephyrites suffered a massive loss just prior to Heart of Thorns. Do we get to find out how all this impacts the Bazaar and its inhabitants?

Joe Kimmes, Team Lead: Yes! Matthew Medina did an incredible job adding new scenes, dialogue and life to the Bazaar; you’ll find a number of characters to learn about the state of the Zephyrites from, as well as memorials to their losses over the course of the story.

One of the other elements that appealed to me about revisiting the Festival of the Four Winds was the Zephyrite presence in the festival – they’ve been in a slightly nebulous state since Season 2, and it felt like a good opportunity to revisit them and let players discover how they’ve been recovering.

Matthew Medina, Designer: There is a light story wrapper for the festival that definitely catches players up on what the Zephyrites have been up to since Dry Top, and there’s some additional lore and character moments that touch on the main storyline, but for the most part we constructed the festival story content to be standalone, since it is available to players from all over the game.

Are we going to find humanity has any new enemies in this round of the Gauntlet?

Joe Kimmes, Team Lead: Indeed, and this was another opportunity we saw based on events in the living story. When the Crown Pavilion ran previously, it claimed to showcase triumphs against the enemies of humanity and Kryta, but there was a notable absence. It may have been a wish to not disturb the peace or meddling from the ministry, but the Pavilion didn’t feature the notorious White Mantle cult, who have since returned from the shadows and been roundly defeated by the players. They’re now present in historical recreation form in the Pavilion, taking over a section from the ogres.

We’ve also added a new tier of challenges to the Queen’s Gauntlet, five one-on-one bosses that players will be able to challenge in any order once they’ve beaten the first normal tier. These bosses are tuned to be obstacles for even players who’ve been diligently training their skills since the last Gauntlet, and I’m looking forward to seeing them in action from the spectator ring!

Sanctum Sprint has still got to be one of my favorite activities. The question is, who out of you has the best time?

Joe Kimmes, Team Lead: We may have to schedule a team playtest to settle this, but since Guild Wars 1 I’ve had a strong affinity and track record for the racing activities, so I humbly ask for your support!