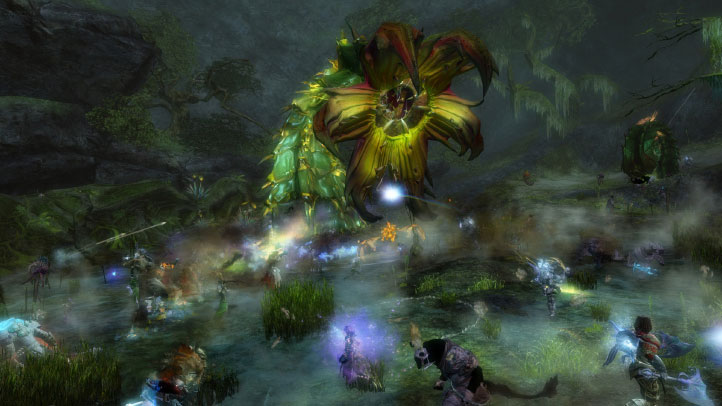 “The heroes of Tyria face a battle on two fronts; their beloved land is imperiled as never before. From under the sun-baked sands of Bloodtide Coast a gigantic, three-headed jungle wurm has arisen to threaten all who come within its domain due to Scarlett’s search for the magical leylines. In the mountains of Lornar's Pass, Scarlet's latest creation — a towering, mechanical monstrosity — is wreaking destruction.”

Triple Trouble was released in conjunction with the Living Story: Origins of Madness and the Twisted Marionette. While Marionette is no longer available, the three headed wurm rampages through Bloodtide coast every 4 hours. The fight itself is essentially 3 boss fights going on simultaneously that are split into 3 Phases. The escort phase, decapitation phase and kill phase. All three wurms must be decapitated within 60 seconds of each other to progress from phase 2 to phase 3.

Weapons: Sharpening stones or tuning crystals are required to max out everybody’s dps.

Since all 3 wurms need to be dropped at the same time it is important to make sure the dps is spread evenly between each wurm. The basic set-up is as follows:

Once set-up is complete, each wurm should have between 45-55 players in order to ensure a good chance of success

Condi teams are in charge of taking out any husks that spawn during phase 1. Teams are usually made up of Necromancers and Engineers with the goal of pulling husks away from the main zerg. Then a Necro’s Epidemic is used to spread condi to all the husks, essentially melting them. Husks have very high armor and low vitality meaning straight dps will do next to no damage to them while conditions will practically melt them.

Reflect teams are in charge of stopping the Wurm from spitting out eggs. Eggs that land and spawn will hatch into Veteran Wurm Grubs after 30 seconds. Grubs have ranged aoe’s, hit like a truck and are incredibly hard to kill. 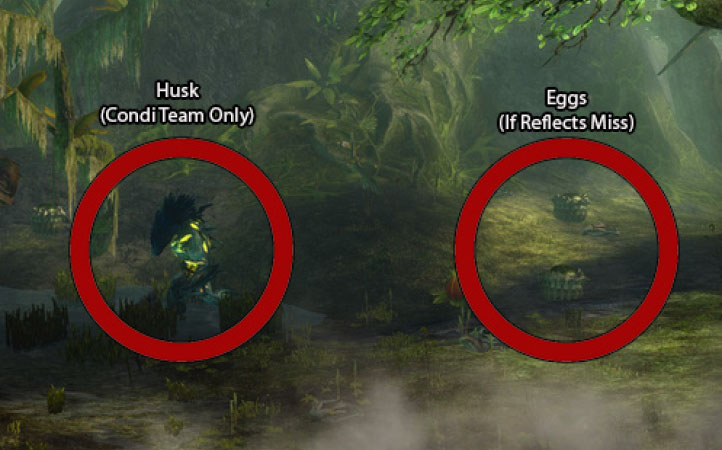 The Reflect Team generally consists of a group of 5:

Anyone interested in learning to reflect or call is highly encouraged to watch this reflect strategy video by GW2 player Kalak. https://youtu.be/A88iwlpx_U8 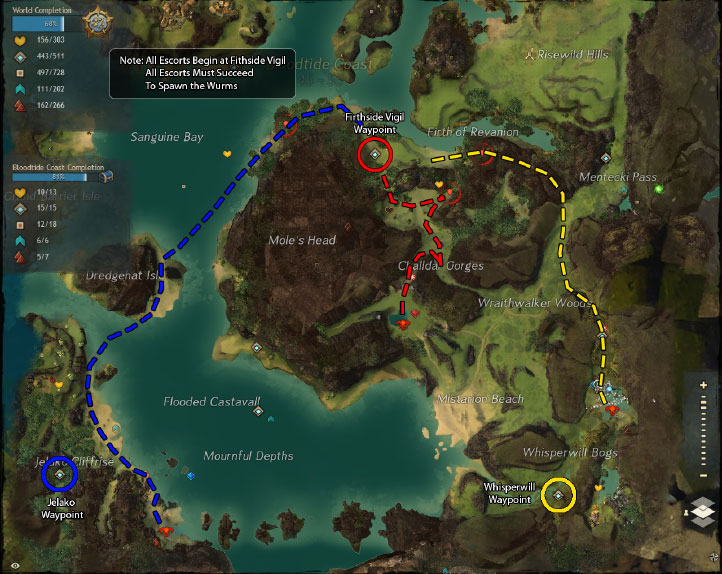 For each wurm an investigator will be making their way from the Vigil camp to each of the three spawn areas. Along the way they’ll encounter eggs and veteran wurm heads which need to be killed. Should the investigator die, the escort team will have 4 minutes to rez the investigator before the event fails. Note: All escorts must succeed for the Evolved Jungle Wurm to spawn.

Each Wurm will need a 5 man team to run the escort. Escorts scale, so any more than 5 players will make things more difficult. This also gives commanders an extra 5-10 minutes to finish instructing the zerg on how to successfully decapitate their wurm.

When Escorts arrive at their designated wurm, players will have about 1 minute to do any final prep work before the fight begins. Generally this will involve popping sharpening stones/tuning crystals, dropping food/banners, as well as assigning war banner numbers (usually done right after the commanders explanation).

Once the wurm arrives, players will have 14 minutes to take the wurm heads to 0 health and decapitate them. When the first head has been decapitated, the over-all timer will reset to 60 seconds and the other two heads must be decapitated during this window to proceed to phase 3.

The basics of each wurm is to:

All wurms have the following basic attacks: 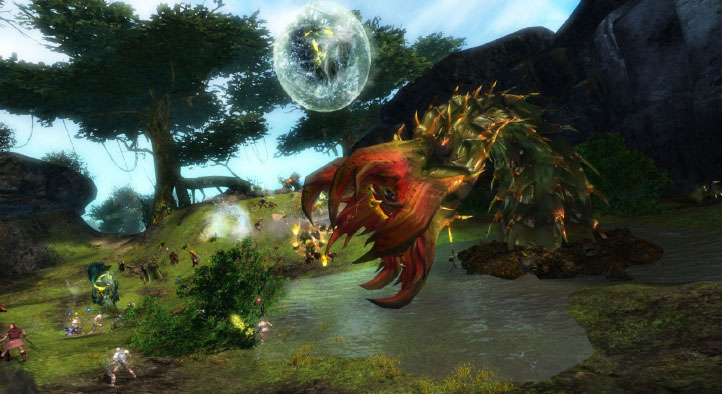 Crimson is considered the easiest out of all the wurms mechanic wise. Around the wurm players will see 3 phytotoxin extractors (see mini-map for location): Red, Yellow, & Blue.

Players will need to run in a counter-clockwise direction and pick up the various colored clouds that will randomly spawn and take those clouds to their corresponding colored extractor.

For the final burn of phase 2, Crimson will usually fill both yellow and blue extractors and then wait for the call to fill red. 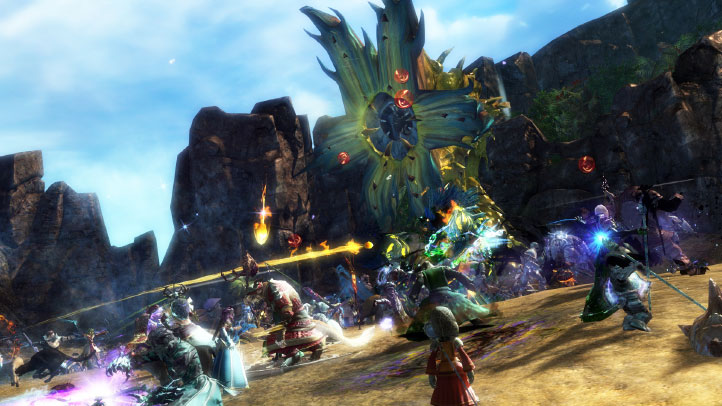 Cobalt is arguably the most difficult of the three wurms as it requires quite a bit more coordination and the individual players carry a lot more responsibility on this wurm. There are three keg locations around the map: Easy spawn, Medium spawn, Hard spawn.

Kegs will spawn randomly at one of these three locations every other minute. The goal is to run 20 kegs from these locations and place them on the giant arrow in front of the wurm to trigger the burn phase.

While the overall concept seems simple, the execution of the mechanic can be difficult and a lot of issues can come into play when running kegs. Veteran Wurm Heads will spawn around the map, and if focusing on kegs/keg runners, they can rapidly reduce the number of kegs dropped on the drop spot. Husks, if they are in the keg drop area, can destroy kegs with their launch attack. Another thing to keep in mind is the hard/medium keg spawns can also be hard to run if players are not adept at doing jumping puzzles. Kegs can be lost by people falling into the water. Also, the Wurm’s aoe’s can cover the keg drop point and land on the zerg so players need to be on their toes and dodging as needed to avoid losing their kegs. 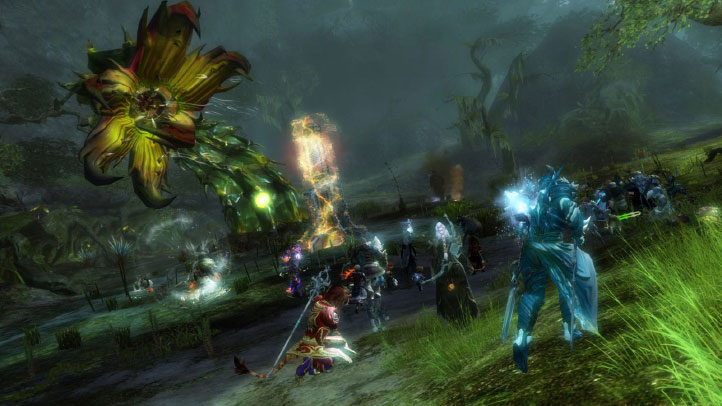 While the mechanic is fairly straight forward, the Amber Wurm is by and far the most unforgiving if mistakes are made. Players will need to seek out and destroy a special Abomination to get the required buff to be eaten.

Once it dies, it will explode, but instead of dealing damage the explosion will provide the Wurm Attractant, or more commonly referred to as the “eat me” buff to all players in the white AOE circle. The buff allows players to be eaten by the Amber wurm and enter it’s stomach where they will grab harpoons, bust their way out & trigger the burn phase. It’s very important that all players are listening to their commander and working as a solid unit. It takes 20 harpoon shots once players are spit out to trigger the burn phase.

Once all 3 of the wurm’s heads are decapitated, phase 3 will begin. This is the hardest part of the fight and it requires the most player skill. Players will only have 2 minutes to DPS their wurm head down while trying to avoid the Wurm’s attacks and making sure they are stacking in the correct position, buffing, and dropping consumables. This part is a very frantic, fast paced, adrenaline filled fight.

During phase 3, the wurms have the following attacks:

Break Down of Phase 3