We've seen a fair share of survival games over the past few years. Building a game that separates itself from the pack is increasingly more difficult as more are released. But that hasn't stopped Richard Svensson from pushing forward on his vision.

Valheim is set in the 10th Norse world, where you must face off with mighty beasts to win the favor of the gods. You'll explore the mountain peaks and beautiful forests as you fight for survival in some of the toughest conditions. Craft powerful weapons, gather your friends and create massive unyielding castles. You can even create longships and take to the seas for your brethren.

Today we have the pleasure of sitting down with Richard Svensson to discuss his upcoming game. 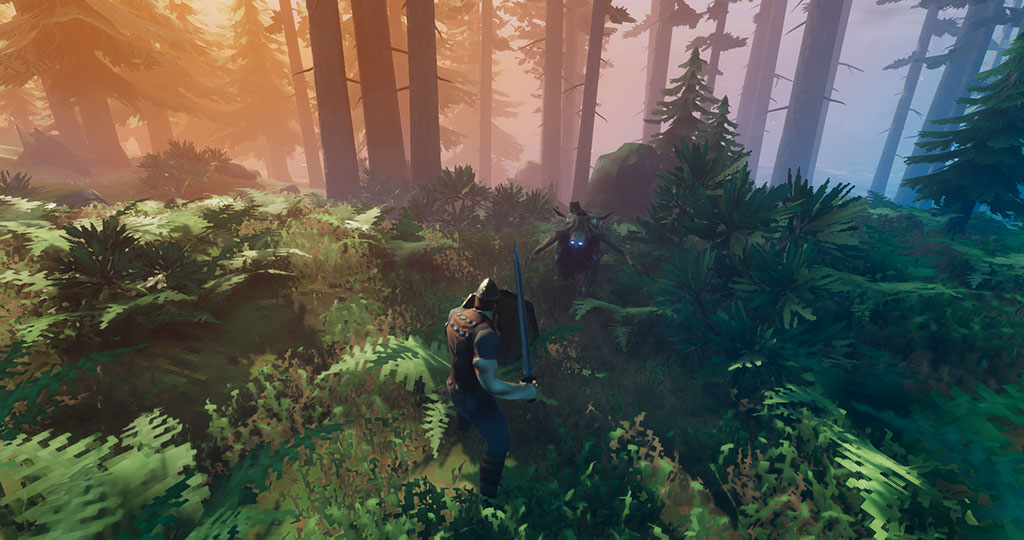 Thank you for joining us today. Before we get started can you tell us a little about yourself and what inspired you to create Valheim?

Hello my name is Richard Svensson, I live in the small city of Skövde in Sweden. Skövde has become pretty famous for having a large number of game studios, especially for such a small city. Just to mention a few of them: Coffee stain studios ( Goat simulator ), Redbeet interactive (Raft), Pieces Interactive ( Titan quest expansions ), Stunlock (Battlerite) , Ludosity (Slap City) and a lot more, so you could say I’m in really good company over here.

I have worked in the gaming industry for about 10 years, foremost I worked at a company called Piece Interactive here in Skövde. My primary role these 10 years has been as a programmer but I have also had a hand in some design work over the years.

In my spare time I have been working on my own games for as long as I can remember, starting out with doing games in QBasic back in like 6th grade. Before I started working on Valheim I worked on a game called Tolroko for a few years. Tolroko was a John Carter / Dark sun inspired sci-fi survival game with some similarities to Valheim. With Tolroko I also wrote the game engine from the ground up, there was always a balance between working on improving the engine versus working on the actual game. When I eventually ran into a, I guess you could call it a designer-block, I didn't know where to go with the main design for Tolroko. I eventually gave up.

After a few months I started experimenting with doing a peer-2-peer network backend for server-less mmorpgs for fun. I chose to use Unity instead of my own engine since I didnt wanna get distracted by working other engine features. I managed to get the p2p system working and figured I should make a game with it. So I started making some kind of fantasy setting that eventually turned into a viking setting. I came up with this pixelated art style that I really started to like. Eventually I kind of dropped the whole p2p-mmorpg idea and just focused on making a multiplayer viking survival game. It has really been a very organic gradual development from a network-test into a viking survival game.

I have never been much for competitive games and very much prefer single player or coop experiences. The main inspirational sources for Valheim would probably be games like Skyrim, Minecraft, Terraria, and maybe a few spoons of Ultima Online, as well. Oh, and lets not forget viking metal bands like Amon Amarth! 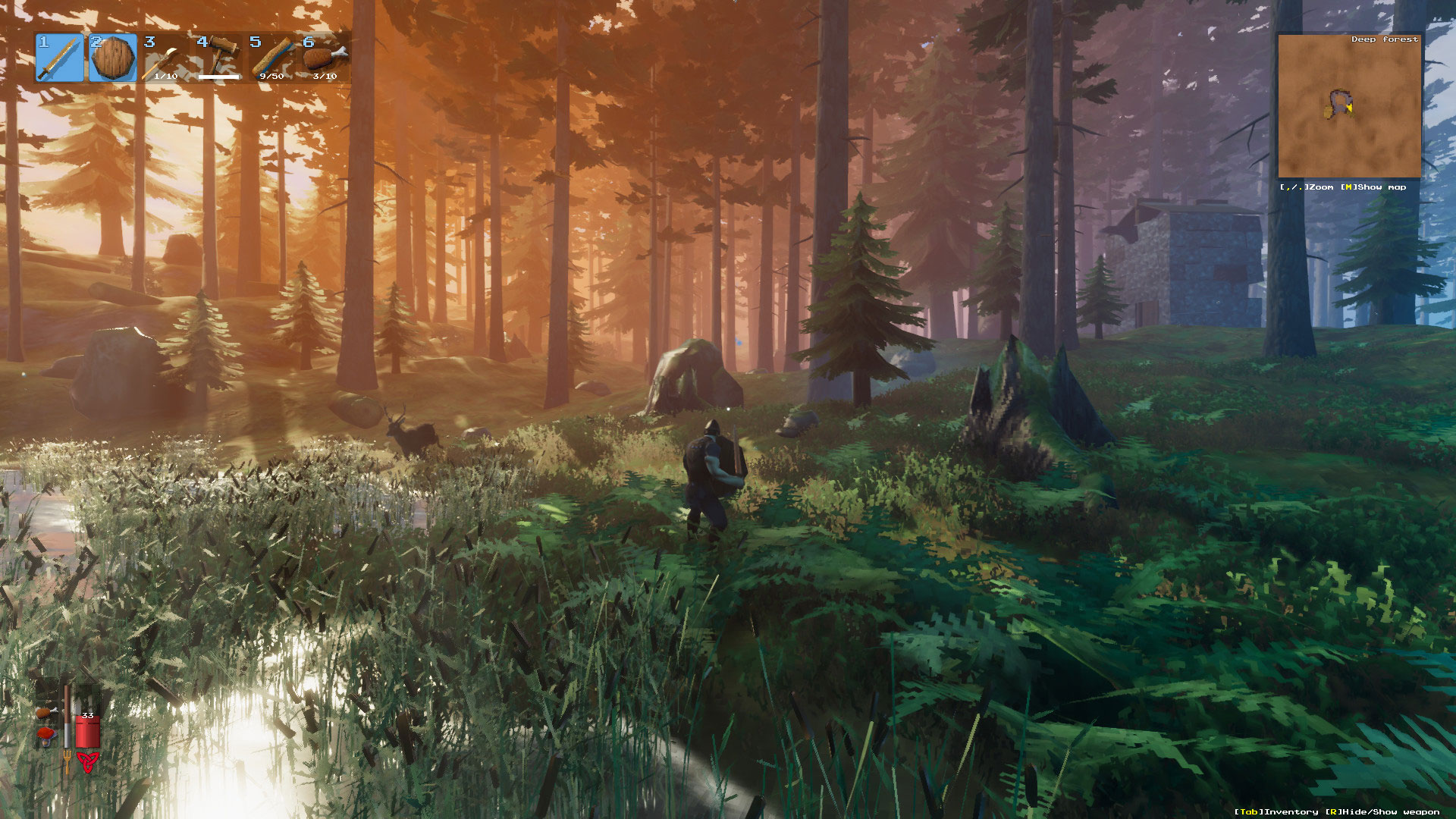 Can you tell us a little about how you created Valheim as a mostly one man show? What engine did you use and are there any tools that helped make the development process easier?

I use Unity 3D as the core engine. One nice thing with Unity is that it’s very easy to customize and extend with whatever you need if you have the know-how. I have created a lot of custom systems on top of Unity for Valheim like networking, terrain and world generation systems.

Did I mention that I do all my development on Linux? I do. I prefer to use open source software wherever it’s possible. For example I use Blender for modelling and animation, and Krita for texturing. I also try to buy assets from the Unity store to save time with varying degree of success. I often have to put time into customizing what ever assets I buy to make them match the style of the game.

Making the alpha version of the game available on itch.io has helped a lot with building a community around the game. The Valheim community has been really supportive and is helping out a lot with things like bug testing, localization, ideas and suggestions.

Other than that it's mostly just hard work, also it helps a lot with supportive friends that give you a hand now and then :) 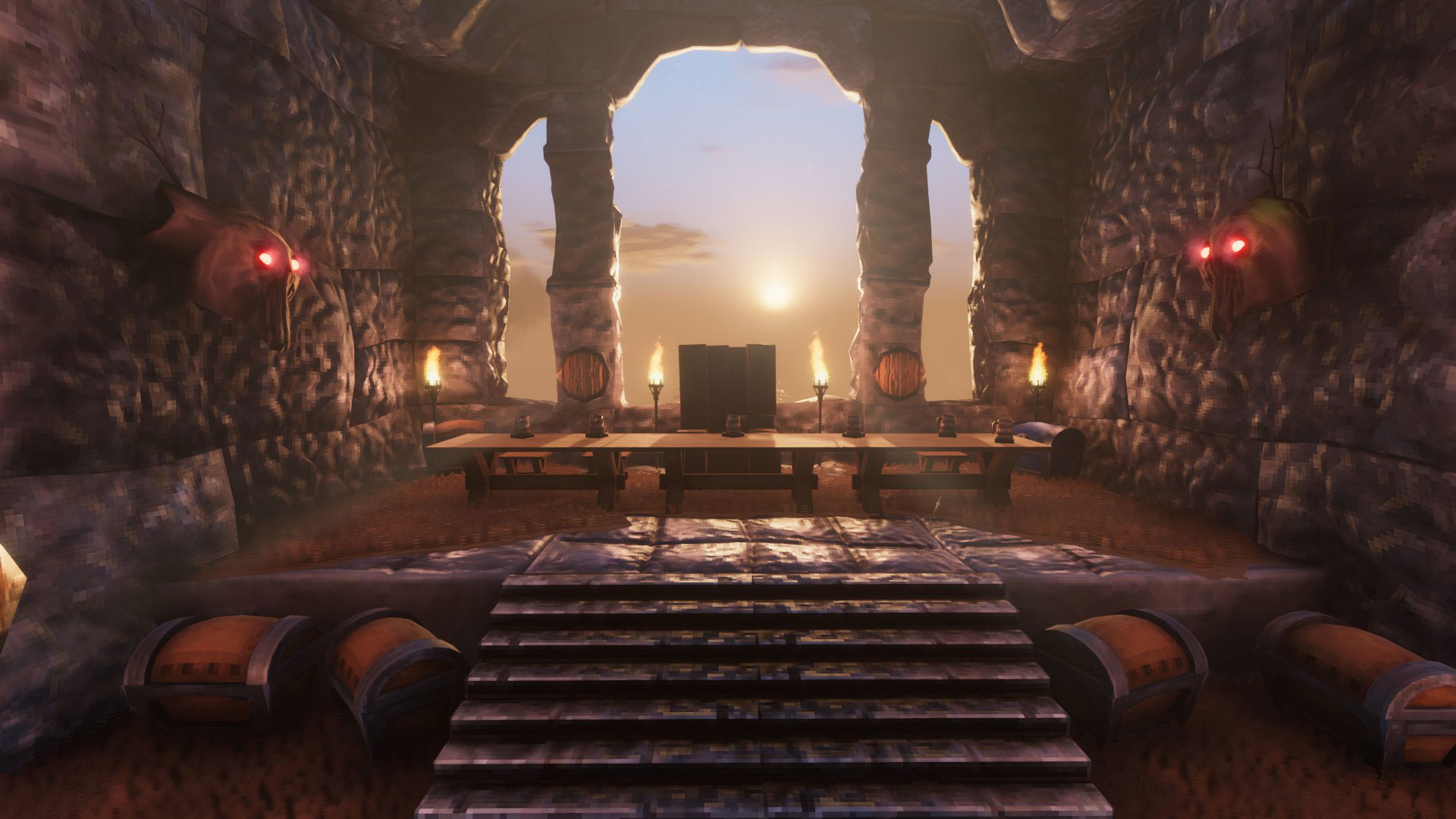 Most survival games have a love obsession with forced full loot pvp. I mean, literally, there are hundreds of them. What made you choose to go against the grain and create a cooperative experience instead?

To be honest, I have no idea what you are talking about, I had to google “full loot pvp” because I had no idea what that was until now. Basically I made no conscious decision to go against anything, I simply make the game I want to play myself. And as I said earlier, pvp never interested me that much. Also creating a PVP game when you mostly work alone is very very hard. It would simply be too hard to playtest.

Now I hear that in Valheim, we don't simply crash into beaches to make our grand entrance. How does the player arrive in the 10th realm?

Yes, that is correct. You play as a viking that has died, and for some reason the gods are not certain you are worthy to go to Valhalla. So instead you are sent to Valheim to prove your worth once and for all. The aesir gods have kind of taken over the world of Valheim and converted it into a proving ground for warriors. You, thus, arrive in the claws of a giant valkyrie and are dropped off wherever it feels is a suitable location for you to start your adventure.

What kinds of ferocious monsters will we be able to face off against in Valheim?

Will there be some monsters or challenges that you'll need to rally some friends to overcome?

Yes, definitely, there will be a few different boss creatures scattered around the gameworld. You often have to figure out some kind of puzzle to be able to summon these mighty beasts. It would be wise to prepare yourself and your party before you go into these battles.

Once defeated you will get a trophy as a testament to your success in battle. The trophies can of course be displayed on the wall of your meadhall. Defeating boss creatures will also give you access to special items and materials.

How will ships come into play in Valheim? Will there be PvE battles on the high seas?

The world of Valheim is a flat & circular world. You always start your adventure in the relatively safe area in the center of the world. The further out from the center you go the more difficult biomes you will encounter. Ships are an effective way to get to more exotic biomes far away from the starting area without having to travel through dangerous lands. At this stage in development sailing the seas of valheim is pretty safe unless you get shipwrecked far away from home. But in the future I really hope to add some huge and creepy sea-serpents and similar creatures that you can encounter while out sailing.

I understand you can build castles. Will there be PvE sieges and siege defense or are castles simply a place to call home and take a break from the battle?

Yes, in a way there will be, depending on your progress in exploring the world, what bosses you have killed and so on. Different types of random events can be triggered. For example, if you have killed “The Elder”, the king of the Greydwarfs (Spoiler), the Greydwarfs will launch attacks on your present location now and then. The safest place to be would probably be inside your fortified castle. 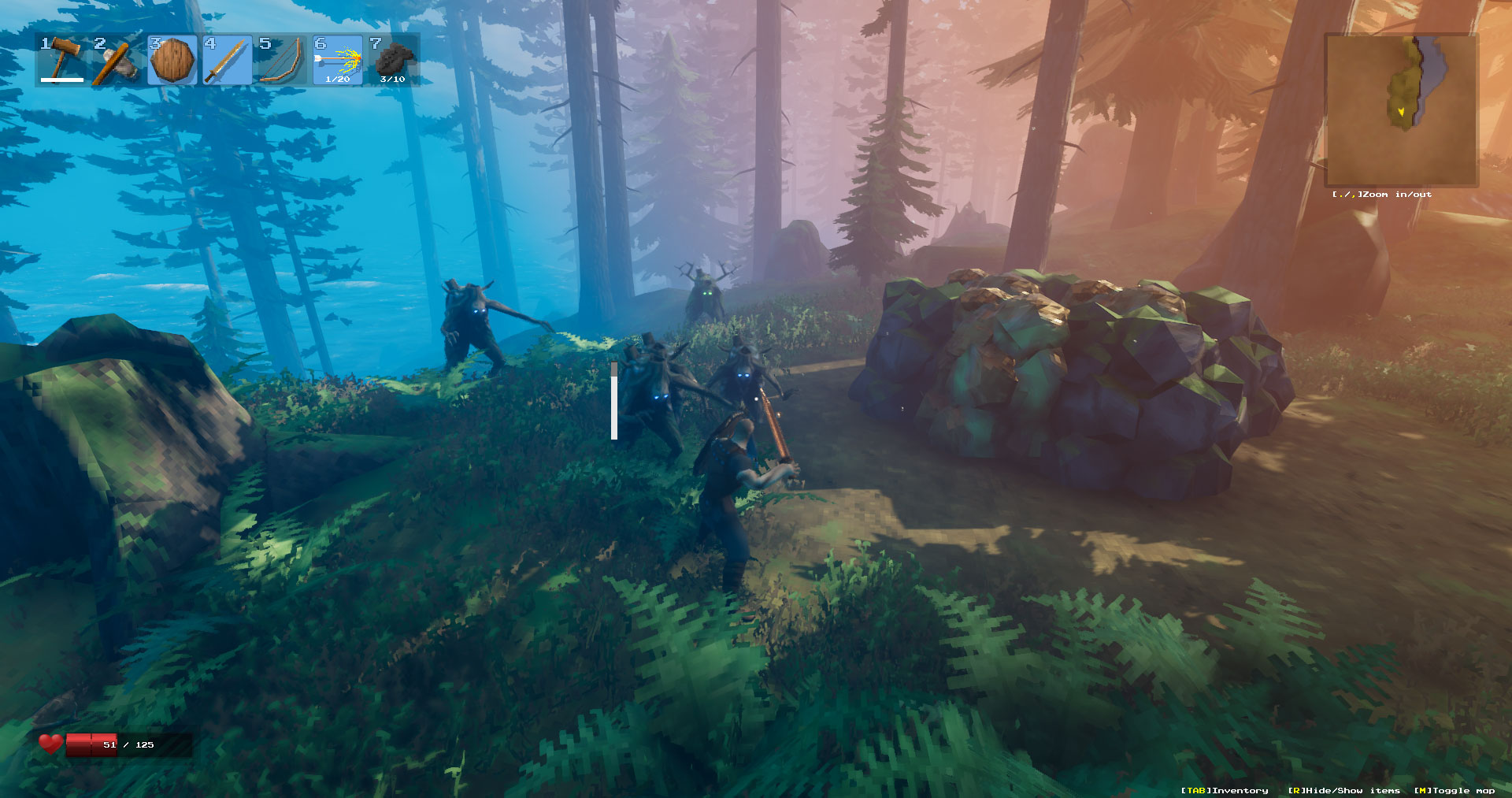 Do you have any inspiring words for aspiring game developers looking to pave their own path in the industry?

Start chasing your own dreams instead of someone else's.

Learn More About Valheim On:

I highly recommend you join our Discord chat:
https://discord.gg/44qXMJH

You can read about and download the now pretty old, alpha version of Valheim at:
https://dvoidis.itch.io/valheim

There is also a “coming soon” Steam page, don't forget to add it to your wishlist:
https://store.steampowered.com/app/892970/Valheim/ 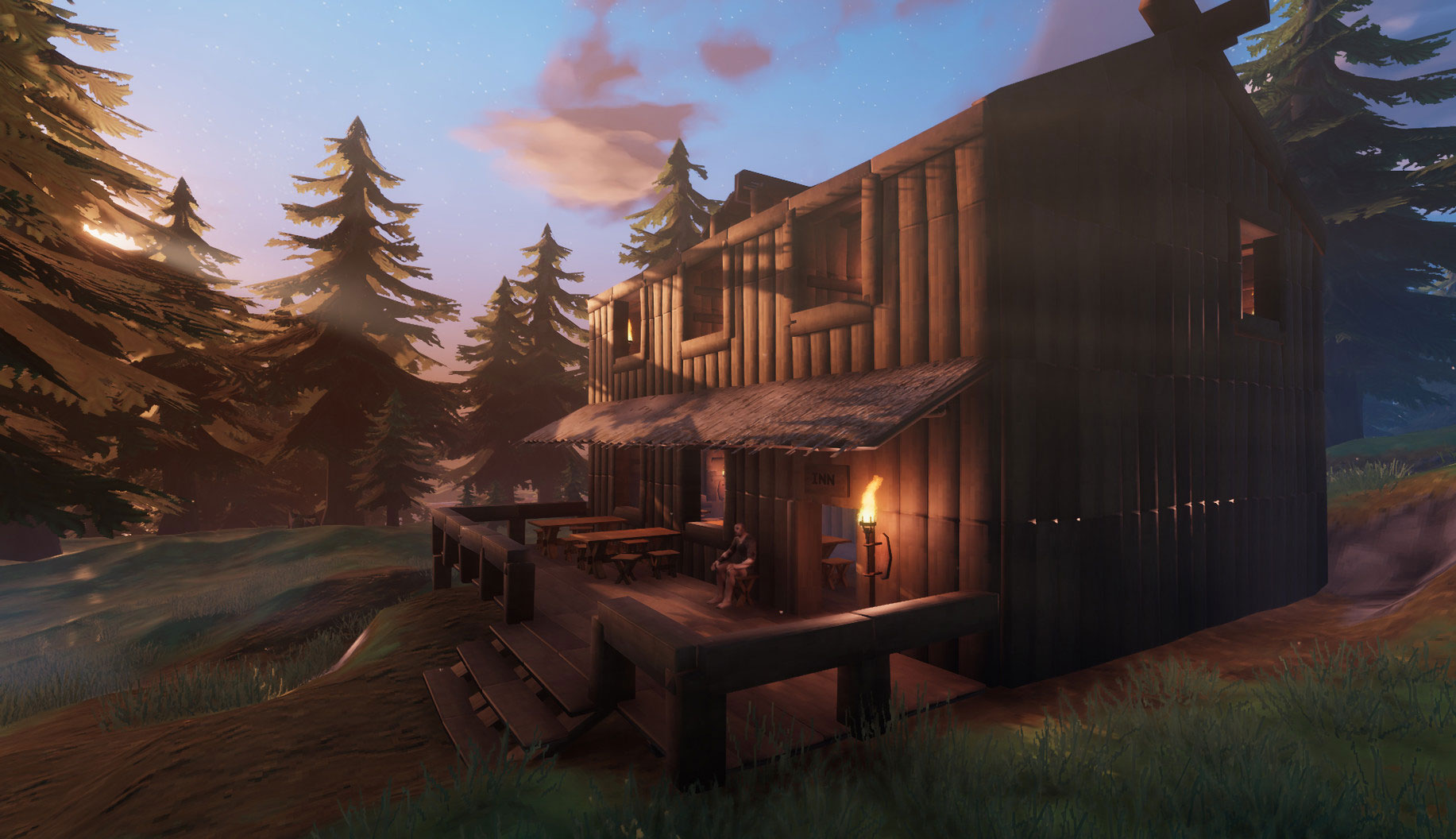 Valheim is a game about exploring a huge fantasy world inspired by Norse mythology and viking culture. You start your adventure at the relatively peaceful center of Valheim. The further from the center you travel, the more challenging the world becomes. But you will also find more valuable materials that you can use to craft deadlier weapons and sturdier armor. You will also build your own viking strongholds and outposts all over the world. Eventually you will build a mighty longship and sail the great oceans in search of exotic lands … but be wary of sailing too far...