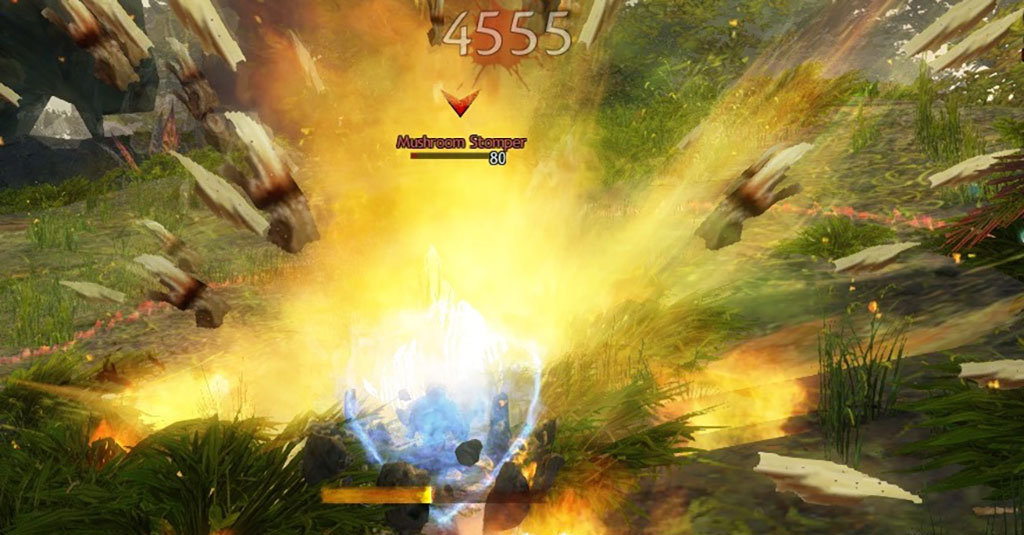 Tinte Rois had grown up in the jungles of Maguuma though she had spent a lot of time in Rata Sum and the influence of the Asura could be seen for miles. What could go wrong deeper in the jungle when plants got a mind of their own? Sylvari were plants after all. Okay, they were weird and many times made no sense at all, but one could manage to deal with that. You just remembered, never try to re-compute any of it.

She trekked into the Verdant Brink far enough to realize Mordremoth had twisted the plants enough to make great vines reach into the sky and take out an armada of airships. Not a good thing, but now it appeared rather stagnant. The uprooted land with the massive vines went onward, unchanging. She had to check out the aftermath, but did not wind up alone.

“Ah, this place smells quite delightful.” Marfach took in a deep breath as if trying to suck in the very energy of the place.

Tinte frowned. Something noxious permeated the air. “You would think it smelled good. Only a necromantic plant could. If you even think of succumbing to Mordremoth I will have no issues raining fire down on you, twig.”

Marfach laughed. “No, this place needs a good pruning so life grows more abundantly. Let’s find something to snip.”

Tinte refrained from face palming as the purple Sylvari danced off into some denser foliage. A squeal made her run after her friend. She watched Marfach spin into the air laughing. She felt dizzy watching the flight of the Sylvari until she landed safely on a ledge above.

“Come on up here. The view is quite spectacular.” Marfach waved. “Just bounce on that mushroom there.” She pointed to a rather innocent looking yellow mushroom at the base of the cliff she now stood upon.

Tinte walked over and examined it. Nothing seemed out of the ordinary. It did not smell, though it looked like it shifted air to rise above its head. She sucked in her breath and made a daring jump onto it. The sudden spinning into the air caught her off guard despite having seen her friend doing the same mere moments earlier. She landed next to Marfach glad the spinning did not make her sick.

Some semblance of a path led further into the jungle from the cliff’s edge into a cleared area.

“Oh, my! that mushroom is moving.” Marfach pointed as it charged towards them.

Tinte’s head swam with the mushroom’s hit and despite seeing stars she was sure Marfach had been thrown well behind her. In front of her was a mushroom about the size of the one she had jumped on, but this one had an attitude.

She fired off a spell, slamming a spike of molten material into the mushroom as it stomped again. The impact made them both reel as fiery stone exploded everywhere. She flipped backwards and threw a few quick fire spells at it. It charged through them.

It slumped at her feet. Tinte sighed with relief. Then she heard cloth tearing behind her.

Tinte turned to see Marfach hanging awkwardly in a tree mostly by remnants of her dress. Despite what caused this trauma, the Asura fell into a fit of laughter.

“Oh, do get ahold of yourself and help a friend out.” Marfach’s dress ripped further as she tried to twist and reach up for a branch. “It’s a good thing I know how to sew.”

Tinte regained her composure only to start coughing as the smell of the burnt mushroom hit her. She ran over to the tree Marfach hung in with tears running down her cheeks. She wiped her eyes as she looked up realizing she had no way of reaching even the lowest branch. A quick survey of the area showed no way to climb and glide into the tree. Not even a bouncy mushroom to put her higher and come back down. She could see all sorts of stuff in the sky above. This place was definitely a mess. She had one option.

She pulled off her pack and started rummaging through it. Soon rope and a grappling hook lay on the ground next to it.

“You hit me with that and I’ll make sure my pets do more than sneak up and tickle you.”

“It’s this or I burn the tree down. I could chop it, but that would take too long. Besides it does not seem to be of good quality wood.”

Marfach simply sighed and dangled. “Get on with it before another one of those… Look out!” She pointed across the clearing.

Tinte spun. She called up her fire elemental. It intercepted the charging mushroom at the same time Marfach’s deadly bug did. The bug got stomped first giving the elemental and Tinte free shots at it. Another cooked mushroom slumped on the ground.

Tinte screamed as something thudded to the ground behind her. She spun ready to blast whatever it was to find Marfach grinning at her.

Tinte rolled her eyes as she watched Marfach manage an agile leap to her feet despite her fall. A good deal of preening by the Sylvari achieved an acceptable look. The effect was something only a plant could pull off, with a tattered dress and disarrayed leafy hair.

“Let’s see what other kind of mushrooms we can find. We already know what most of Mordremoth’s regular army looks like, but this should be quite intriguing to you. Something new to analyze.”

Tinte decided not to argue with that logic. She did want to figure out what made these mushrooms tick. So far they had found one that helped them bounce higher into the jumbled landscape and one that tried to stomp them into the ground. She did not want to speculate what other types would be found.

After several fights with roaming minions of Mordremoth they found another clearing with moving mushrooms. These looked rather docile compared to the stomper. For one it was quite smaller and had quite the spiky head. 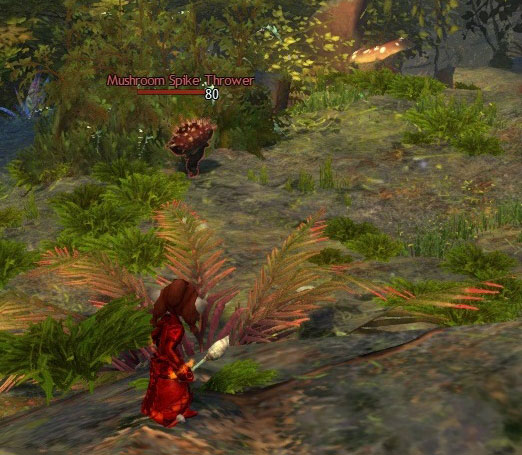 Marfach shifted into her deadly form and flew left. Even with the warning, Tinte saw the spikes coming too late. She screamed even as she brought fiery rock down. The magmatic slag crashed onto its head, and was followed up with fire all around it on the ground. She still got spiked again before its charred body fell to the ground.

“No thanks to you.” Tinte scowled as she cast a healing spell.

“I did manage to warn you and you did kill it before I could flank attack it.”

Tinte pulled a spike out of her jacket’s tail. “Good thing you can sew.”

“Holes are the worst to fix.”

Marfach returned to her Sylvari form and poked at the dead mushroom with her staff. “Mushroom three, the spiked horror. Dodge when it bows its head.”

Tinte huffed as she turned away. Several steps later she found herself slammed into the ground, the world spinning. She fought to recover. 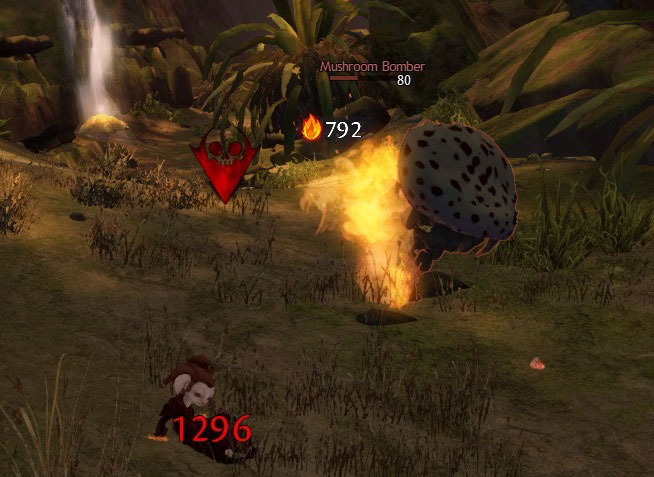 “Oh no you don’t little bomber shroom.” Marfach cackled as she summoned both her pets.

Tinte watched as deadly magic and the crazy pets of a necromancer took out the mushroom. She tried to note how it did its attack on one of the pets, but the headache from the surprise attack made that impossible.

Tinte sighed with both relief and frustration as Marfach helped her. “I’m done for the day.”

“You do look a little green from that attack. Now that we really know these mushrooms, we can be better prepared for our next adventure.”

Marfach sounded far too chipper about it. Tinte so wanted to punch her friend, but pretended she was okay. Her head still swam from the explosion.

“I’ll take your silence as a yes to further adventures. But let’s get some drinks first, if you don’t think it will spill out the holes in you.”

Tinte managed a weak laugh. “You can mop it up with your rags.”

Marfach laughed with her. “Fair enough!”